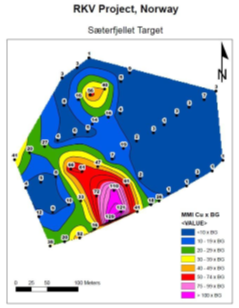 At Sæterfjellet, in the northern part of the RKV Project, Playfair has discovered a coherent MMI Cu anomaly as shown on the detailed map. The anomaly is open to the southeast and contains 7 values of MMI Cu greater than 50 times background in an area 125 metres long by 50 metres wide. The widest and strongest part of the anomaly is on the most southeasterly line and the anomaly limit has not yet been defined.

Sæterfjellet is broadly on strike and less than 4 km north of the historic copper mines at Kvikne. Of particular note, there is no record of any previous exploration work in the immediate area.

Don Moore, CEO of Playfair, comments “Discovery of another high priority drill target in a previously unexplored area along the geological trend from a past-producing mine further validates our approach to exploration on the RKV Project. We are confident that further work on the six remaining target areas, now augmented with the recently completed drone aeromagnetic surveys, will generate additional drill targets. Permitting work is ongoing and will be expanded, as warranted, to include new drill targets.”

Detailed drone aeromagnetic surveys were recently carried out over six Target Areas. Five areas were completed though the sixth, Børsjøhø, was flown only partially after the unmanned octocopter crashed due to a gap in the digital terrain model. All results have been received and are currently under interpretation. 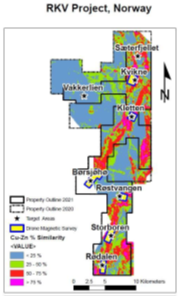 Playfair used an extensive digital database maintained by NGU as the basis for the initial evaluation of the area. To prioritize areas of the Property for further exploration, Playfair contracted Windfall Geotek to carry out its proprietary CARDS (Computer Aided Resources Detection System) platform on the entire RKV Project. The targets generated by CARDS covered less than 1% of the RKV Project area evaluated.

Twenty-six of the CARDS targets were then evaluated by MMI (Mobile Metal Ion) soil geochemistry, a proven advanced geochemical exploration technique known to find mineral deposits. A total of 1,926 samples, including field duplicates, were taken in four phases of MMI fieldwork. Seventeen of the twenty-six CARDS targets evaluated yielded MMI values greater than 50 times background in one or more of copper, cobalt, or nickel.