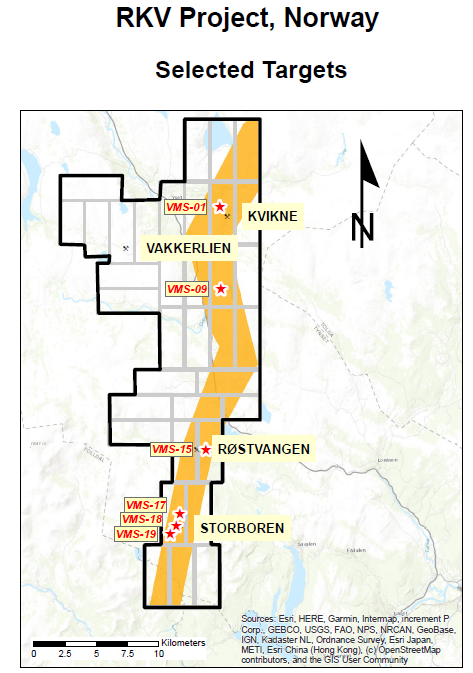 The first phase of the MMI evaluation process identified 15 of the original 24 CARDS targets for further field work. The second phase of MMI provided detailed spatial continuity and extended MMI anomalies on 2 targets.

The just completed third phase covered the remaining 13 targets selected from the first phase MMI together with one additional CARDS target proximal to the past producing Rostvangen Mine. Four targets were selected for further work based on the third phase MMI results bringing the total to six targets.

Further fieldwork is planned on the remaining 5 principal targets with the goal of advancing some, or all, of these to drill-ready targets.

The Company and its Norway-based representative are working closely with local authorities and the Directorate of Mining to obtain the required permissions for drilling Storboren.

Playfair Mining’s 100% owned RKV copper-cobalt-nickel project currently encompasses 344 square kilometers in a historic mining area about 100 km south of Trondheim by road. Two historic copper mines, Kvikne and Rostvangen, a drilled nickel-copper deposit, Vakkerlien, and over 20 known mineral occurrences mapped and sampled by the Norwegian Geological Survey (NGU) together with an extensive digital database formed the initial impetus for exploration in the area.