Each year the Silver Institute publishes its World Silver Survey. In the 2022 edition, some key trends come to the fore and are certainly worth noting.

Silver supply from mining did rise in 2021, at 4.6% which was less than the original forecast of 8%. Still, the higher output was the largest annual increase since 2013 as mining recovered from the COVID-19 disruption. Primary silver mines, which only account for about 25% of mined silver, saw a larger increase of 10.2%. Recycling was up by 7%, as scrap silver found its way into the market thanks to higher prices, reaching an eight-year high of 173Moz. Despite the increase in supply last year, I expect supply to remain a challenge going forward. 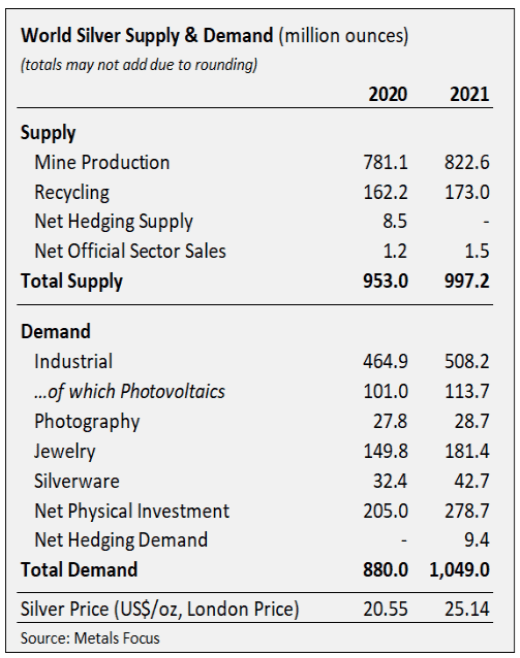 Although overall supply grew by 4.6%, demand was up an impressive 19.2%, or more than four times supply. Every single demand category enjoyed growth last year, the first time that’s happened in 24 years. I believe that signals a paradigm shift in the silver markets, as demand has become extremely robust. Total demand surpassed pre-pandemic highs to reach its highest since 2015 to reach 1.05 billion ounces. Industrial uses reached an all-time high of 508.2Moz, up 9%, led by solar panel consumption which touched 113.7Moz.

Solar alone now accounts for 10.8% of annual silver demand. And as I explained in my presentation at the May Metals Investor Forum conference, the forecast for electricity generated from solar by 2030 is 8.5 times current levels. If that were to happen, and at current silver consumption levels from solar panels, solar alone would consume nearly all of the current silver supply each year. Naturally, that’s not going to happen. But just the trend in that direction suggests silver prices will need to rise considerably from here.

With that in mind, it’s little surprise that the supply deficit experienced last year is expected to continue this year and for several years into the future.

Silver investment was up a ripping 36% to reach 278Moz, the highest since 2015, fed by inflation, negative real rates, and economic uncertainty. India, which is a big investment demand market for physical silver, saw sales of coins and bars more than triple in 2021. Silver ETFs saw another year of net inflows, with global holdings up another 65Moz to reach a new record of 1.13Boz.

For me, the biggest takeaways are these: despite increased supply, demand outpaced that by four times, and Metals Focus (which produces the report for the Silver Institute) is forecasting annual silver market supply deficits to persist well beyond 2022.

As you can imagine this all sets a very bullish stage for silver as we look forward. It’s true that the silver price has languished for a while. But that’s part of silver’s nature. It has long quiet periods. But when it awakens, look out. The point is, you want to own it when it’s quiet, and therefore be ready before it awakens.