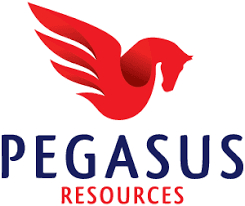 The claims are located approximately 5.5 Kilometres southwest of the enCore Energy Corp., Dewey–Burdock ISR Uranium deposit which is also hosted in the Chilson member sandstones. The Dewey–Burdock deposit contains a measured and indicated resource of 7.39 M tons at an average grade of 0.116 %U3O8, or 17.12 M lbs. U3O8 (Azarga 43-101 Technical Report PEA, 2019). The project is currently in advanced–stage mine permitting.

The technical information contained in this news release has been reviewed by Kent Ausburn, PhD in Geology and (PG) since 1992, who is a “Qualified Person” as defined in NI 43-101. Kent has served as QP for several Public Companies since 2002. Professional geologist active in the mining /exploration industry for approximately 40 years.

Pegasus Resources Inc. is a diversified Junior Canadian Mineral Exploration Company with a focus on uranium, gold and base metal properties in North America. The Company is also actively pursuing the right opportunity in other resources to enhance shareholder value.