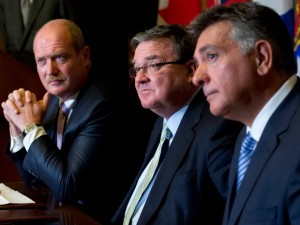 The Prospectors & Developers Association of Canada is encouraged by the announcement made yesterday by the Finance Ministers of British Columbia, Ontario and Canada that the three jurisdictions will work to establish a cooperative capital markets regulatory system.

“We applaud the Finance Ministers of Ontario, British Columbia and Canada for laying the groundwork for more uniformity in securities regulation across Canada,” said Ross Gallinger, Executive Director of the PDAC. “While this is an important step in the right direction, we look forward to learning more details to fully understand the system and if it will indeed reduce regulatory burden and costs.”

The PDAC has long called for uniform securities regulation and enforcement across Canada. PDAC members point to regulatory complexity, ever-increasing compliance costs for publicly listed companies and lack of enforcement as significant barriers for capital raising for exploration and mining. Junior mineral exploration companies, which make up the bulk of PDAC’s membership, account for approximately 25 per cent of Canada’s publicly listed companies and rely on equity financing for grassroots mineral exploration.

“The PDAC has consistently called for a securities regime that is simple, consistent across the country and eliminates redundancies associated with multiple securities regulators,” said Gallinger. “Elements of the cooperative system have the potential to address some of these concerns, particularly the commitment to a simplified fee structure and enforcement against misconduct. We stand ready to work with the Finance Ministers of Ontario, British Columbia and Canada on the design elements of the cooperative system to reduce regulatory burden, facilitate capital-raising and maintain the integrity of Canada’s capital markets.”

The Prospectors & Developers Association of Canada is a national association representing the mineral exploration and development industry with over 10,000 individual and corporate members. The PDAC Convention-the mineral industry’s largest annual event-takes place March 2-5, 201