The Company has also expanded the exploration team with the addition of Geologist, Gary Edmondo  who will oversee and manage the FAD exploration project. Mr. Edmondo is a qualified person and has worked as a mineral exploration geologist since 1987 with a focus in Nevada.  His experience ranges from early-stage exploration to development stage Companies. Gary has worked on several deposits and mineralized systems including epithermal, carlin, and skarn systems, at various projects including; Fire Creek, Goldfield, Pinson, while spending seven years in the Eureka District also working for Homestake Mining.  Additionally, Mr. Edmondo worked for Staccato Gold and Timberline Resources in south Eureka, where he increased the mineral resources three-fold.

Figure-1 below is a cross-section demonstrating the relative location of drill holes for both the oxide and FAD Main Zone targets.

Table 2: Drill Highlights from the near-surface Oxide Target on the FAD Project

“The assay results from hole GH21-04 further confirm high-grade mineralization on the FAD Main Zone, which is proximal to the existing FAD Shaft.  We will continue to drill the mineralized footprint while further testing the step-out potential as we have successfully done with the drill results announced to-date.” stated Christina McCarthy, Paycore’s President & C.E.O.

The FAD deposit currently has a mineralized footprint of approximately 1.5 x 1.5 km and is open in multiple directions.  Outside of the core deposit area, little to no exploration has been completed and there are multiple extensions which are largely untested.  Additionally, near-surface oxide mineralization (shown in Table-2), was overlooked by previous operators. It has the potential for widespread mineralization proximal to the historic high-grade underground mine that last operated more than 100 years ago.

Paycore has completed drilling for eight holes to-date and announced assays for six holes.  Assay results are pending for the remaining two holes and will be announced upon receipt. The Company has completed the phase-one drill program consisting of approximately 3,900 metres of drilling. The phase-two program has already commenced and will be ongoing.

Paycore is a corporation incorporated under the Business Corporations Act (Ontario) and, through its subsidiaries, holds a 100% interest in the FAD Property that is located in the heart of the Eureka-Battle Mountain trend in Nevada, USA. The FAD Property is host to the high-grade poly-metallic FAD deposit that was partially delineated with surface and underground drilling in the 1940s and 1950s.  The FAD Property is located less than 3 miles from Eureka, Nevada and has established infrastructure, including a shaft, roads and old buildings. FAD was previously owned by Barrick Gold. Barrick acquired the FAD Property when the Company acquired Homestake Mining in 2001.

Overseen by an experienced board and management team that includes Jim Gowans (Non-executive Chairman), Christina McCarthy (President & C.E.O), Steve Filipovic (C.F.O. and Corporate Secretary) and John Begeman (Director), the Company is focused on advancing the delineation of mineral deposits on the FAD Project (which is situated immediately to the south of, and along strike from, I-80 Gold Corp’s Ruby Hill Mine).

All samples were submitted to either ALS Minerals of Sparks, NV, which is an ISO 9001 and 17025 certified and accredited laboratory, which is independent of the Company. Samples submitted through ALS are run through standard prep methods and analysed using Au-AA23 (Au; 30g fire assay) and ME-MS61 (48 element suite; 0.25g 4-acid/ICP-AES and ICP-MS) for ALS. ALS also undertakes their own internal coarse and pulp duplicate analysis to ensure proper sample preparation and equipment calibration. Paycore’s QA/QC program includes regular insertion of CRM standards, duplicates, and blanks into the sample stream with a stringent review of all results.

The scientific and technical data contained in this news release pertaining to the FAD Property was reviewed and approved by Gary Edmondo, CPG, who is a “qualified person” within the meaning of NI 43-101 – Standards of Disclosure for Mineral Projects. Gary is a certified professional geologist through the AIPG (#11089) 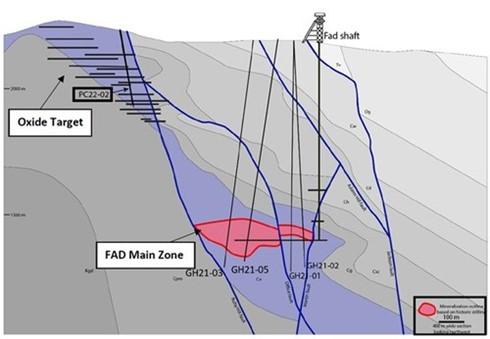