Pasofino Gold Limited (TSX-V: VEIN) (OTCQB: EFRGF) (FSE: N07A) is pleased to announce that it has received results from a further 12 holes drilled at the Tuzon deposit on the Dugbe Gold Project, in which the Company has an option to earn a 49% economic interest (prior to the issuance of the Government of Liberia’s 10% carried interest).

Intersections include the below:

“These intersections continue to demonstrate the scale of the Tuzon deposit and the common occurrence of 100 to 200 gram-metre holes, and that it remains open for further expansion. We look forward to completing the updated Mineral Resource Estimate for Tuzon and the nearby Dugbe F deposit within the coming weeks.”

Table 1. All intersections (not highlights) in numerical order, for the latest 12 drillholes at Tuzon. Those shown in grey-italic font for TDC031, TDC081 and TDC086 are for the upper part of the hole drilled between 2011 and 2014, recently extended by up to 250 m. Those ending _GT are holes that were drilled partially for geotechnical purposes.
Note: Some intersections may not reflect the true thickness of the mineralized layer.

Results may support gains to the current 2 Moz (Indicated) MRE at Tuzon.

TDC177 is close to the southwest extent of the thick lower limb of mineralisation, also referred to as ‘zone B’ and so the intersection in this hole for this zone (71.0m @ 1.50 g/t Au) confirms the extension of this quality zone. TDC086 is a further 80 m south of TDC177 and was a 2013 hole deepened by 177 m. The new part of the hole intersected 51.2m @ 1.08 g/t from 368.3m downhole confirming the extension of the thick hinge of zone B mineralisation southwards, leaving it open for further expansion. TDC190 is an ‘infill hole’ but with intersections that are better than the thickness and grades of the previous block model at this position.

The results from these 12 holes, and the other recently reported infill and step-out holes may support gains to the Tuzon MRE based on the ‘stacked’ and thick intersections including broad zones of >2 g/t Au. Work on the updated MRE for Tuzon by SRK Consulting (UK) Limited commenced and is expected to be reported early October, along with the updated MRE for the nearby Dugbe F deposit.

Opportunities for further expansion of the deposit are apparent: an obvious drill target evident on the southeast ‘limb’ of the fold south of line 1120N is a continuation of the zone intersected in recently reported[2] TDC186 (17.3 m @ 2.70 g/t), as labelled in figure 1. And the thick hinge zone as intersected by TDC177 (71.0m @ 1.50 g/t from 318m downhole) and TDC086 needs further drilling to follow it southward along strike (figure 2).

The trenching program is nearing completion, 5 of 7 trenches are complete and the first batch of samples is at the laboratory. Trenches are on the ‘Tuzon South’ and ‘Dugbe Shear Zone’ targets to follow-up on encouraging ‘first-pass’ trench results reported in May 2021. These targets are on a 6 km long trend defined by soil anomalism extending southwest on strike from Tuzon. Drilling is planned for Q3/Q4 to test the best trench results. 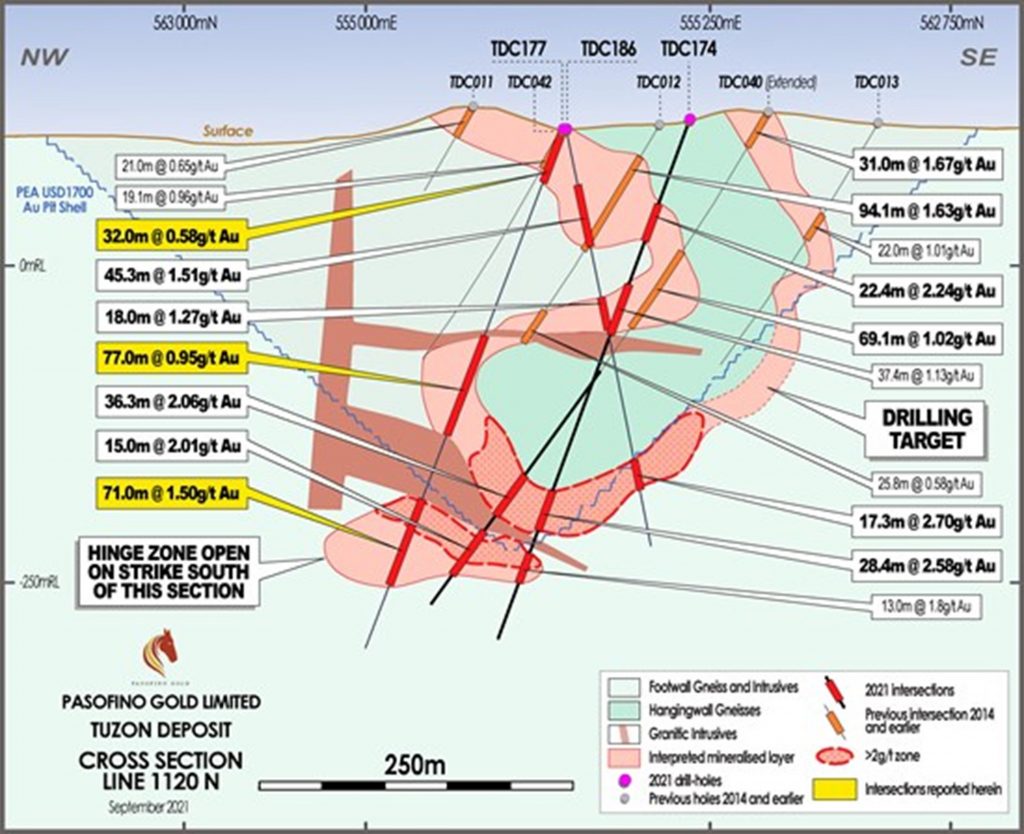 The Tuzon Deposit and Recent Drilling

The deposit footprint is 1.7 km long with an average width of 250 to 300 m, in plan view. Parts of the mineralised layer outcrop for the full length of the deposit. The depth to the base of the mineralised zone ranges from just below surface to over 400 m in the south reflecting the steady plunge of the controlling fold structure. As at the nearby Dugbe F deposit, the host-rock is orthopyroxene gneiss with increased sulphide content (visible pyrrhotite, arsenopyrite and pyrite). At Tuzon the layer has been repeatedly folded and is interpreted to be a large synform which plunges to the southwest at approximately 20 degrees. The mineralised layer is thickened on certain parts of the fold limbs and around the recumbent lower-most fold hinge. The northern limb is referred to as ‘zone A’ and the southern limb of the fold and the hinge of the synform are referred to as ‘zone B’. Zone B is higher grade than zone A with an average of 1.7 g/t gold.

Pasofino added 23 drill-holes at Tuzon between April and July 2021, totaling 6,675 metres of drilling. Of these, six holes were partially for geotechnical purposes and 17 were pure resource drill-holes. Five of the exploration holes involved the deepening of previous (2014 and earlier) drillholes (TDC031, TDC040, TDC078, TDC081, TDC086). The holes were drilled to:

The new holes were positioned using a professional surveying instrument, the Trimble R12i Rover unit. Downhole orientation surveys were completed for all holes and core was oriented to assist with interpretation. All drilling and logging was completed in adherence to industry standard operating procedures. Core recovery is over 95% for all mineralized intersections. Core was drilled HQ (65 mm diameter) through the overburden typically 2-10 m depth, then NQ (47 mm diameter) size. Samples were all half core, analyzed by ALS Kumasi in Ghana, a facility compliant to ISO 17025:2005 for the analytical methods used for the samples. Samples range from 1 kg to over 5 kg depending on the length of each sample. Within every 20 core samples submitted a certified standard and blank was inserted. The results of these samples show acceptable levels of variance. Duplicate (other half of the core) samples were inserted 1 in every 20 core samples to check on precision. Sample weights on dispatch and received sample weights were examined to monitor for sample swaps. All samples were stored and transported to the laboratory securely and accompanied by a company representative until arrival at the laboratory. Similar QAQC measures were undertaken for the previous drillholes reported herein; those samples were analyzed by ALS in Loughrea, Ireland which is an ISO 17025:2005 compliant facility for the analytical methods used for the samples. All samples were analyzed by fire assay with atomic absorption finish on a sample with 50g nominal weight. 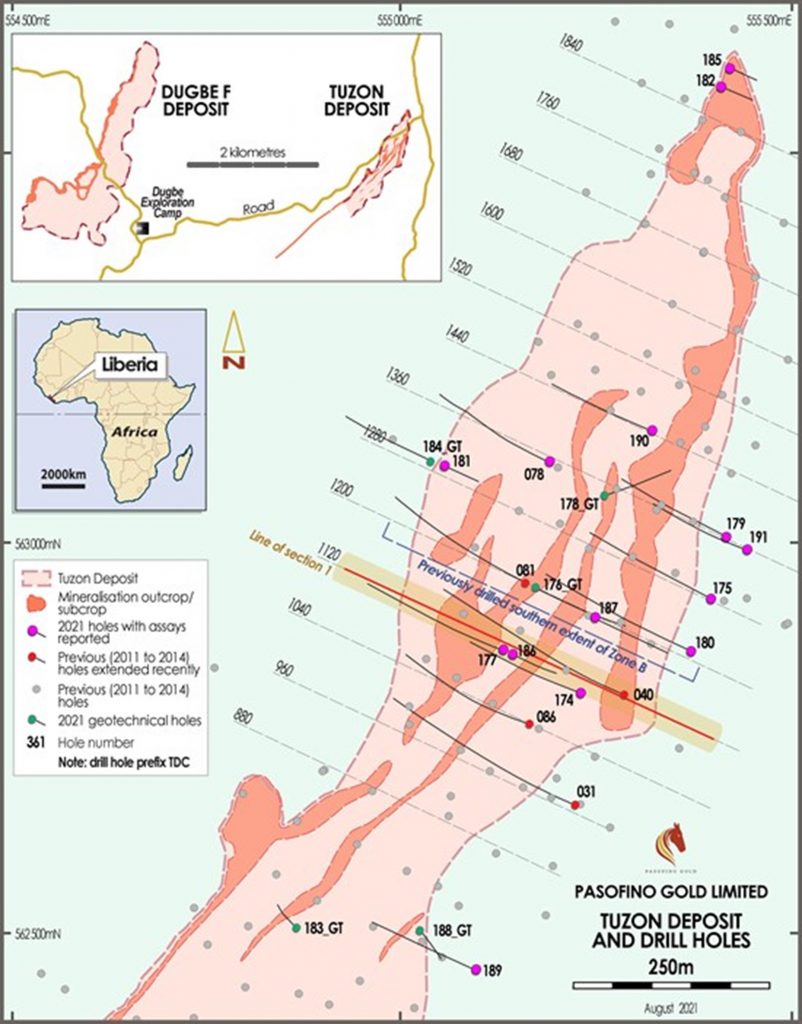 Figure 3. Map locating the cross-section in figure 1 and drill-holes.

Scientific or technical information in this disclosure that relates to exploration results was prepared and approved by Mr. Andrew Pedley. Mr. Pedley is a full-time consultant of Pasofino Gold Ltd.’s wholly-owned subsidiary ARX Resources Limited. He is a member in good standing with the South African Council for Natural Scientific Professions (SACNASP) and is as a Qualified Person under National Instrument 43-101.

About the Dugbe Gold Project

The 2,559 km2 Dugbe Project is located in southern Liberia and situated within the south westmost part of the Birimian Supergroup, which is host to the majority of West African gold deposits. To date, two gold deposits have been identified on the Project; Dugbe F and Tuzon. The deposits are located within 4 km of the Dugbe Shear Zone which is thought to have played a role in large scale gold mineralization in the area. A large amount of exploration in the area was conducted by Hummingbird, including 74,497 m of diamond coring. 70,700 m of this was at the Dugbe F and Tuzon deposits, discovered by Hummingbird in 2009 and 2011 respectively. Both deposits outcrop at surface and may be amenable to open-cut mining. In addition, there are a number of prospects within the Project, including ‘Sackor’ where gold mineralization has been intersected in drill-holes and where additional drilling is planned. No other prospects have been drill-tested to date. At some prospects extensive trenching identified anomalous levels of gold that require drill-testing. An aggressive exploration program to test the prospects is planned by the Company. In 2019, Hummingbird signed a 25-year Mineral Development Agreement (“MDA”) with the Government of Liberia providing the necessary long-term framework and stabilization of taxes and duties. Under the terms of the MDA, the royalty rate on gold production is 3%, the income tax rate payable is 25% (with credit given for historic exploration expenditures), the fuel duty is reduced by 50%, and the Government of Liberia is granted a free carried interest of 10% in the Project. Over $70 million has been spent by Hummingbird on the Project. 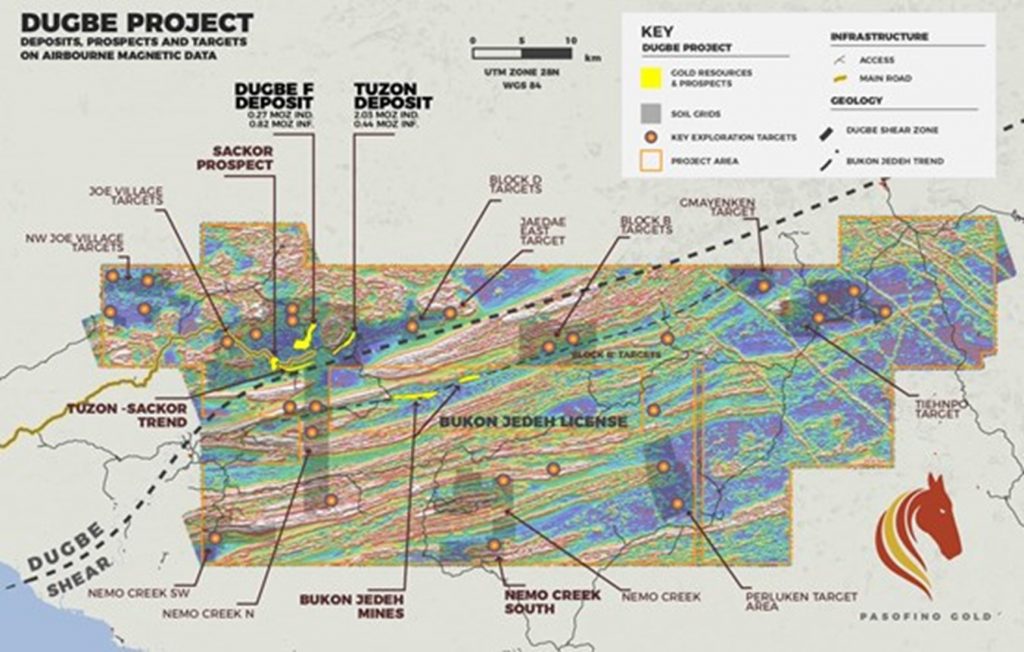 Pasofino Gold Ltd. is a Canadian-based mineral exploration company listed on the TSX-V. Pasofino, through its wholly-owned subsidiary, has an option to earn a 49% economic interest (prior to the issuance of the Government of Liberia’s 10% carried interest) in the Dugbe Gold Project.