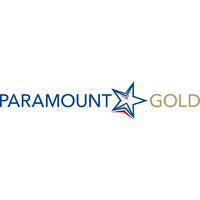 The two holes were initially drilled as part of the geotechnical program for alignment and to support the design of the portal and decline access to the mine. Both holes were drilled outside the boundaries of the current underground reserve, in areas considered as waste rock (see image below).

Drill hole GM19-37 was designed to acquire data related to ground conditions in proximity to the underground decline spiral as well as to provide ground water and permeability data. The hole was drilled to a depth of 831 ft. returning gold grades up to 2.56 g/T. Overall, this hole intersected a true width of 675 ft. grading an average of 0.4 g/T gold and 1.8 g/T Ag.

Drill hole GM19-38 was drilled at the proposed portal location and intercepted gold mineralization of up to 0.98 g/T of gold. The hole was drilled to 100 ft. and intersected a zone of 29 ft. grading 0.6 g/T gold beginning at a depth of 71 ft.

Paramount’s COO Glen van Treek commented, “The significance of these assays is that material with sufficient grade will be stockpiled separately and sent to the mill, rather than being classified as waste, thereby improving overall project economics.”

Based on the September 2020 Feasibility Study, projected processing costs are $28 per ton, suggesting that at current gold prices, any material with grades over 0.55 g/T previously classified as waste, but that needs to be extracted as part of the current mine plan, will be sent to the mill for processing.

“As we approach a construction decision, the updated reserves will be included in a final mine plan accounting for short-term gold and silver prices at that time,” van Treek added.

Exploration activities at Grassy Mountain are being conducted by wholly-owned subsidiary Calico Resources USA Corp. personnel under the supervision of Michael McGinnis (CPG 10914) Project Manager and a Qualified Person under National Instrument 43-101, who has reviewed and approved this release. An ongoing quality control/quality assurance protocol is being employed for the program including blank, duplicate and reference standards in every batch of assays.

Paramount Gold Nevada Corp. is a U.S. based precious metals exploration and development company. Paramount’s strategy is to create shareholder value through exploring and developing its mineral properties and to realize this value for its shareholders in three ways: by selling its assets to established producers; entering joint ventures with producers for construction and operation; or constructing and operating mines for its own account.

Paramount owns 100% of the Grassy Mountain Gold Project which consists of approximately 8,200 acres located on private and BLM land in Malheur County, Oregon. The Grassy Mountain Gold Project contains a gold-silver deposit (100% located on private land) for which results of a positive Feasibility Study have been released and key permitting milestones accomplished.

Paramount owns a 100% interest in the Sleeper Gold Project located in Northern Nevada, the world’s premier mining jurisdiction. The Sleeper Gold Project, which includes the former producing Sleeper mine, totals 2,322 unpatented mining claims (approximately 60 square miles or 15,500 hectares). The Sleeper gold project is host to a large gold deposit (over 4 million ounces of mineralized material) and the Company has completed and released a positive Preliminary Economic Assessment. With higher gold prices, Paramount has begun work to update and improve the economics of the Sleeper project.