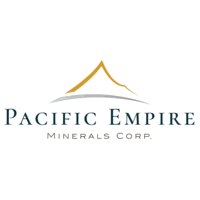 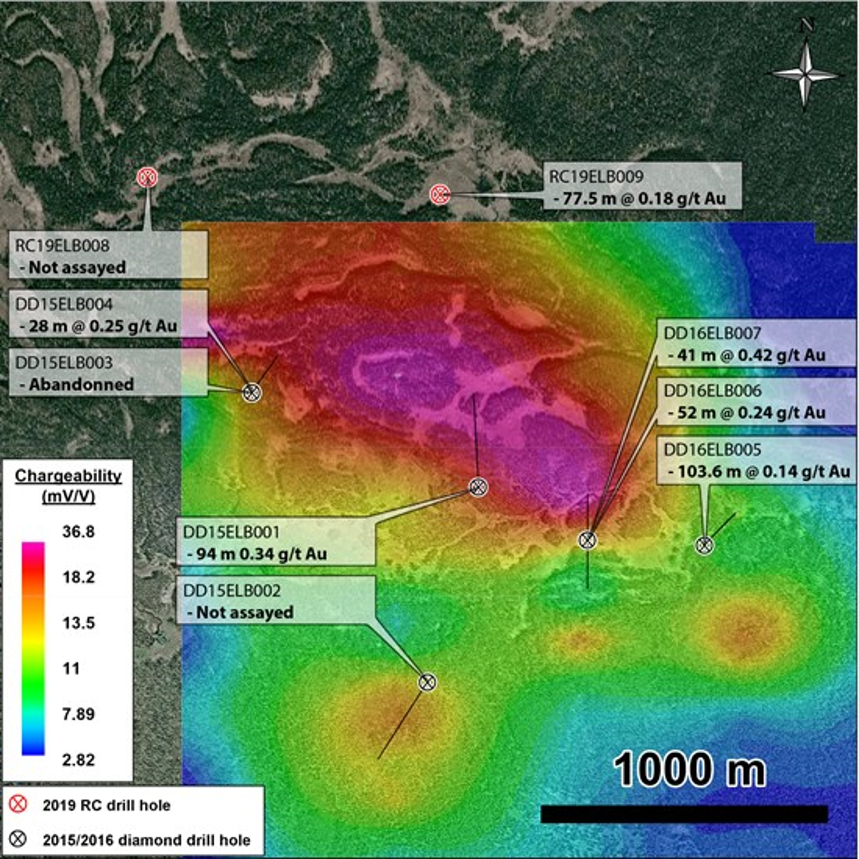 A Reverse Circulation drilling program was completed in November and December of 2019 by PEMC at the Pinnacle Project, located approximately 50 km northwest of Centerra Gold’s Mt. Milligan copper-gold mine. Drilling was primarily focused on the Elbow Target, roughly one kilometre north of 2015 diamond drilling where anomalous gold along with distal porphyry-type alteration assemblages and sporadic copper values were encountered. A secondary target at the Later Target was tested with two short holes. The two holes drilled at the Elbow Target were on swamps that are only accessible in the winter months. Four short RC holes totaling 335 metres were drilled with PEMC’s in-house track-mounted RC drill, with depths of the holes ranging from 36.6 to 112.8 metres. Samples from one hole from each of the two targets were shipped for laboratory analysis.

The Elbow Target, first identified in 2014, represents a copper-gold porphyry target characterized by favourable magnetic and Induced Polarization (“IP”) chargeability signatures in an area with no bedrock exposure and overlain by glacial overburden and swamps. The intent of 2019 drilling was to test magnetic signatures on the northern flank of the chargeability anomaly, approximately 1 km to the north of the most significant hole drilled to date, DD15ELB001, which intersected significant intervals of anomalous gold and sporadic copper values.

PEMC drilled RC19ELB008 and 009 at the Elbow Target in 2019. RC19ELB008 was collared 835 m northwest of the nearest historical drill hole, DD15ELB004, atop a circular magnetic anomaly. The hole encountered chlorite ± epidote altered andesitic volcanics with 1-2% pyrite as disseminations and localized quartz-calcite vein fill. RC19ELB009 was collared 1 kilometre to the east of RC19ELB008, and 1 kilometre to the north of DD15ELB001 which exhibited higher temperature alteration as the historical hole progressed to the north. Chlorite ± epidote ± sericite altered andesitic volcanics with pyrite and localized chalcopyrite mineralization was encountered, with anomalous gold concentrations associated with increased pyrite content and localized quartz veins with sericite alteration as vein selvages. Samples from RC19ELB009 were shipped for laboratory analysis.

The Later Target is characterized as a “bull’s eye” magnetic anomaly roughly 1.5 kilometres in diameter centered by an 800 metre by 400 metre magnetic high, a magnetic signature consistent with that of known porphyry systems. Subtle yet anomalous copper-in-soil geochemistry and IP chargeability characterizes the buried target, which is a target that was drilled tested for the first time in the 2019 exploration program by PEMC.

RC19LAT001 was collared on the central magnetic high anomaly, with the intent of encountering the core of a porphyry system concealed by 6 to 30 metres of glacial overburden. The hole encountered equigranular granodiorite with hematite alteration and localized epidote veining. Primary disseminated magnetite was likely the cause of the subtle magnetic and IP chargeability anomalies in this area. RC19LAT002, drilled 640 metres to the east, was designed to step off the magnetic anomaly and into higher IP chargeability values. Oxidized, equigranular granodiorite with anomalous copper and molybdenum was encountered, however, due to challenging drilling conditions, the hole was not completed to its target depth. PEMC considers this target to be a valid target for further drilling.

Brad Peters, Pacific Empire’s President and CEO, states, “2019 drilling at the Elbow Target at Pinnacle continues to intersect anomalous gold. To step out over 1 kilometre north from a 2015 drill hole that was interpreted to have drilled the margin of a porphyry system and, again, intersect anomalous gold and porphyry-style alteration assemblages, is significant. These results at the Elbow target indicate potential for mineralization to exist between the two sites. Construction of proposed logging roads in the near future will provide further road access to the Sooner and Aplite Creek target areas and which will likely expose some interesting rock in the process.” 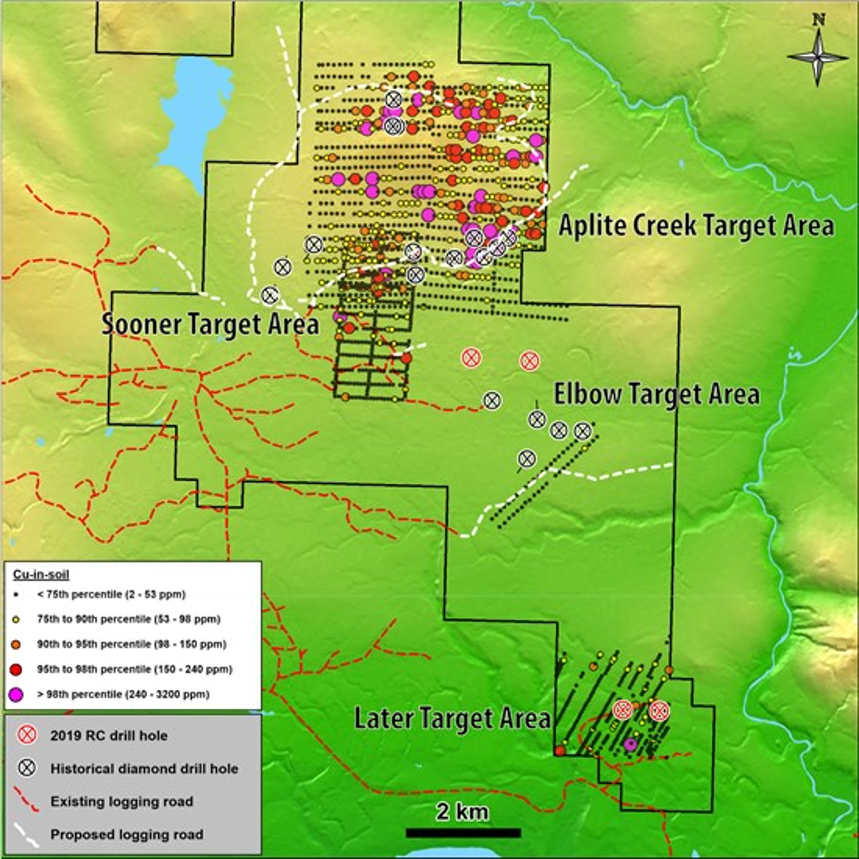 About the Pinnacle Property

The 14,040 ha Pinnacle Property, located in north-central is owned 100% by PEMC. The Property straddles the contact between shoshonitic volcanic rocks of the Chuchi Lake Succession and intrusive rocks of the Hogem Intrusive Suite. Several target areas exist on the Property and have been drilled to varying extents. Ongoing logging operations are continually provided means to access the various target areas, with the next phase of logging to take place at the Aplite Creek and Sooner Target Areas. Historical drilling in 1990 at Aplite Creek intersected porphyry-related copper-gold mineralization, with historical diamond drill hole AH90-4 intersecting 6 metres grading 6.4 g/t Au and 0.1% Cu. PEMC work, predominantly partner-funded, has shown the presence of hydrothermal systems to exist at the Elbow, Sooner and Aplite Creek target areas that are obscured by glacial cover.

Chip samples collected from 1.5 metre drill runs are split using a 3-tier splitter and subsequently placed and sealed in “Hubco” sample bags before being shipped to MS Analytical (“MSA”) in Langley, BC. Certified reference materials consisting of blanks and reference standards are each inserted into the sample stream at a frequency of 1-in-20. Company reference standards, as well as internal laboratory standards, are checked upon analysis as a means of quality assurance. Samples were analyzed using MSA’s IMS-131 analytical package, whereby 20 g aliquots are subjected to an aqua-regia digest subsequently analyzed with ICP-AES/MS. The larger aliquots allow for more reliable gold analyses when compared to typical multi-element analyses.

Rory Ritchie, P.Geo., Vice President of Exploration for the Company, serves as a qualified person as defined by National Instrument 43-101 and has reviewed the scientific and technical information in this news release, approving the disclosure herein.

PEMC is an exploration company based in Vancouver, British Columbia, that employs a “hybrid prospect generator” business model and trades on the TSX Venture Exchange under the symbol PEMC. The Company’s strong portfolio of projects is a result of continuous generative work conducted since the Company’s inception in 2012.

By integrating the project generator business model with low-cost RC drilling, the company intends to leverage its portfolio by identifying, and focusing on, the highest quality projects for partnerships and advancement.