Outcrop Silver & Gold Corporation (TSX-V: OCG) (OTCQX: OCGSF) (DE: MRG1) is pleased to announce the results from three additional drill holes within the Naranjos vein on its 100% owned Santa Ana high-grade silver-gold project in Colombia. Los Naranjos is 350 metres to the northwest of and parallel to the Santa Ana vein system. Los Naranjos shows abundant and locally coarse native silver and electrum (news release July 14, 2022). Los Naranjos is 200 metres wide, extends from the surface to 250 metres depth, and is open in all directions.  Eighteen holes have been drilled in Los Naranjos to date; eight have returned high-grade assays, and three holes have pending assays. On a gram x metre basis, the new results from Los Naranjos provide the thickest and highest-grade drill intercept to date on the Santa Ana project.

“We are incredibly pleased with our recent results from Naranjos,” commented Guillermo Hernandez, Vice President of Exploration. “We believe mineralization can be expanded significantly along the surface and at depth. Intercepts pending assay show locally abundant silver-sulfosalts in core, indicating Naranjos will continue to provide high-grade assays.”

“Drilling on Santa Ana continues to deliver large high-grade shoots,” comments Joseph Hebert, Chief Executive Officer. “Notably, the best holes project to date have been Maras in June and now Naranjos in July. We should be able to consistently increase resource potential as we test the virgin Aguilar vein system, which is notable for its thickness and high grades in historic adits, and our Frias Mine vein system, which has historic production of 7.8 million ounces at 1.3 kilograms equivalent silver per tonne recovered grade from a footprint about the same size as Naranjos.”

Drilling in Los Naranjos to date for all significant intercepts shows a weighted average grade of 1,651 g eq Ag/t over an average width of 1.72 metres. Los Naranjos is 350 metres northwest of the main Santa Ana vein system (Map 2). Surface prospecting before drilling of the Naranjos vein provided samples with values up to 2,224 grams equivalent silver per tonne (see news release June 2, 2022), providing an excellent expression of Naranjo’s potential before drilling.

Core samples are sent to either Actlabs in Medellin or ALS Chemex in Medellin for preparation and then to ALS Chemex in Toronto or Lima, Peru, for analysis. In line with QA/QC best practice, approximately three control samples are inserted per twenty samples (one blank, one standard and one field duplicate). The samples are analyzed for gold using standard fire-assay on a 50-gram sample with a gravimetric finish. Multi-element geochemistry is determined by ICP-MS using either aqua regia (ME-MS41) or four acids (ME-MS61) digestion. Comparison to control samples and their standard deviations indicate acceptable accuracy of the assays and no detectible contamination.

The 100% owned Santa Ana project comprises 36,000 hectares located in northern Tolima Department, Colombia, 190 kilometres from Bogota. The project consists of five or more regional scale parallel vein systems across a trend 12 kilometres wide and 30 kilometres long. The Santa Ana project covers most of the Mariquita District, where mining records date to at least 1585. The Mariquita District is the highest-grade primary silver district in Colombia, with historic silver grades reported to be among the highest in Latin America from dozens of mines. Historic mining depths, vein textures and fluid inclusions studies support a geologic and exploration model for composite mesothermal and epithermal vein systems having mineralization that likely extends to great depth. At Santa Ana, it is unlikely that there is sharp elevation restriction common to high-grade zones in many epithermal systems with no mesozonal component. The extremely high silver and gold values on Santa Ana reflect at least three recognized overprinting mineralization events.

Outcrop drilling indicates that mineralization extends from the surface or the near surface to depths of at least 300 metres. Cumulatively, over 60 kilometres of mapped and inferred vein zones occur on the Santa Ana project. The Frias Mine on the south-central part of the project, 16 kilometres south of the Royal Santa Ana Mines, produced 7.8 million ounces of silver post-production in the Spanish colonial era at a recovered grade of 1.3 kg Ag/t. The Frias Mine is considered an analogue to each of the eleven shoots discovered to date by Outcrop. Between the Royal Santa Ana Mines and towards the Frias Mine, veins have been extended to the south providing strong drill targets in the 4-kilometre-long Aguilar vein and El Christo veins that show high values of up to 5.5 kg AgEq/t. These veins show widths up to 4.7 metres. In total, 12 kilometres of vein zones have been mapped between El Dorado vein to the north and the Aguilar vein to the southeast.

Outcrop is rapidly advancing exploration on five silver and gold exploration projects with world-class discovery potential in Colombia.  Outcrop is currently drilling and expanding the Santa Ana historic high-grade silver district. These assets are being advanced by a highly disciplined and seasoned professional team with decades of experience in Colombia. 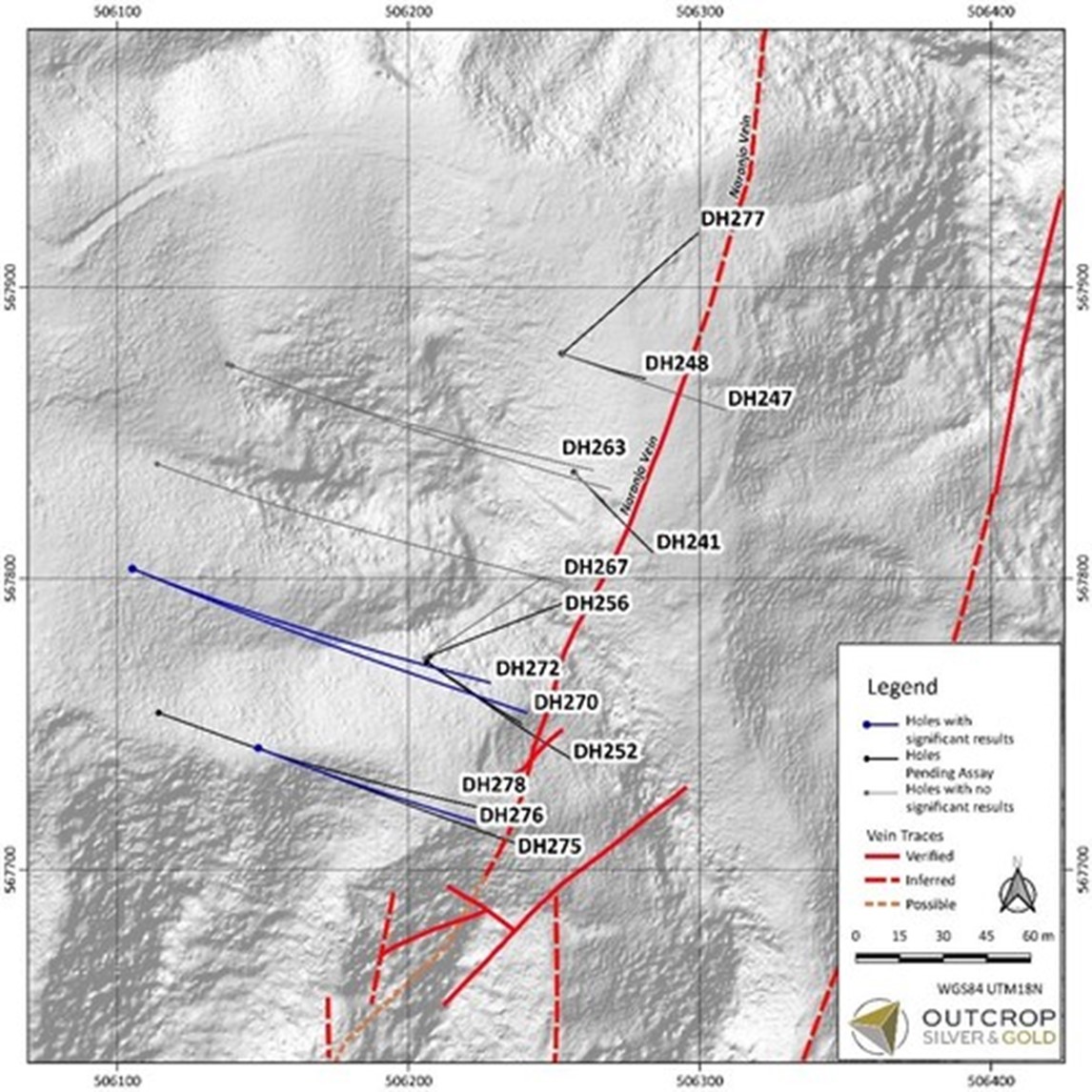 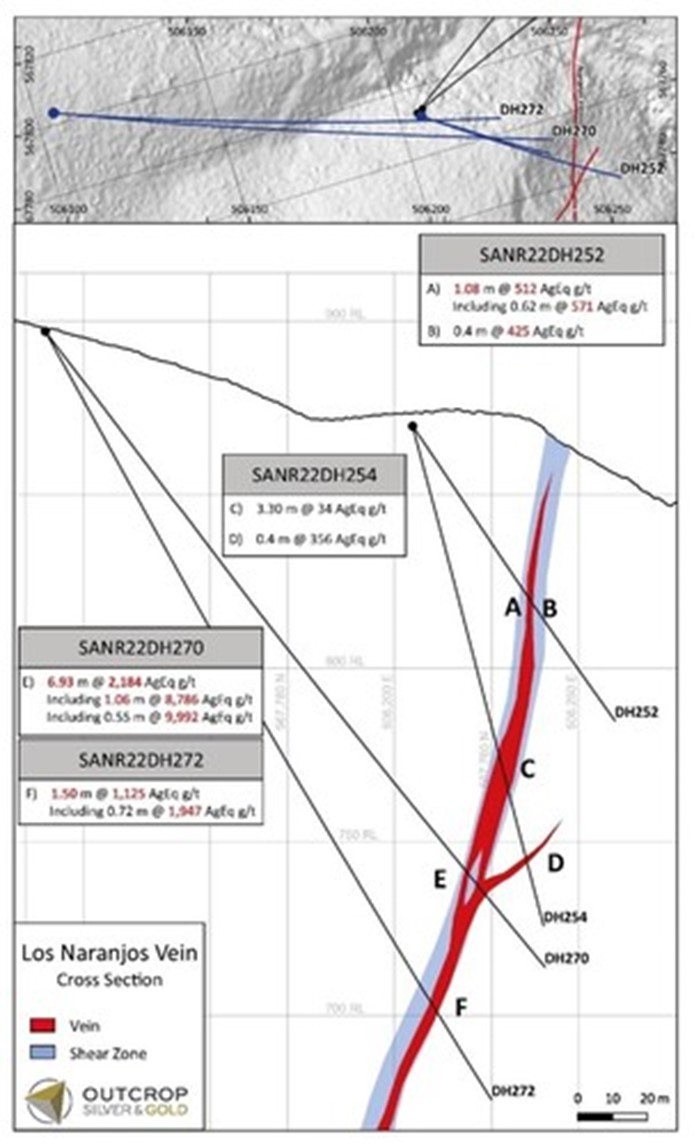 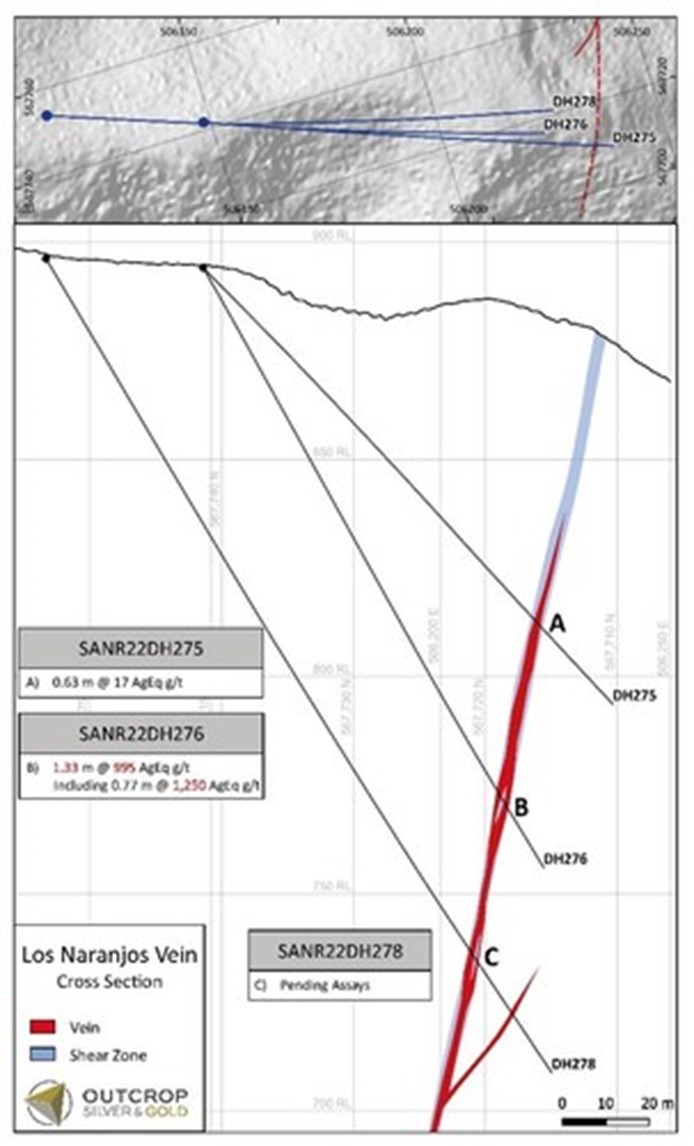 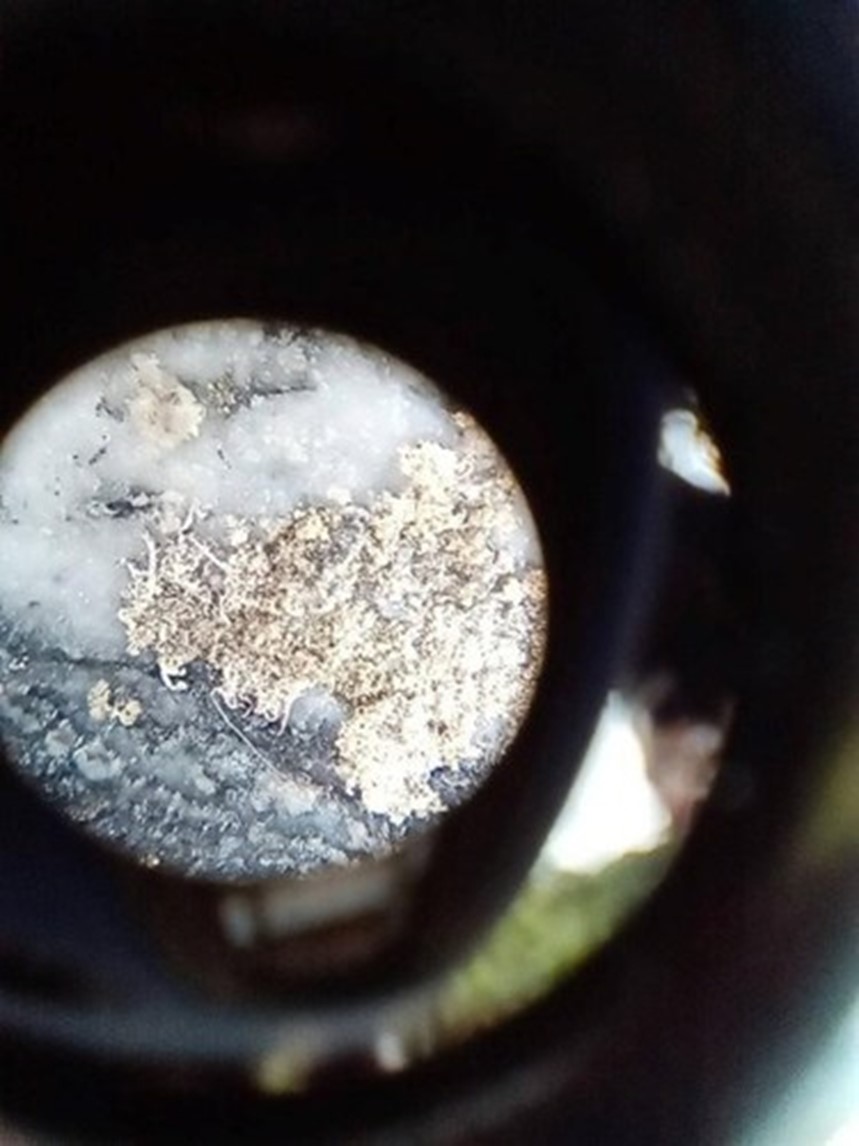 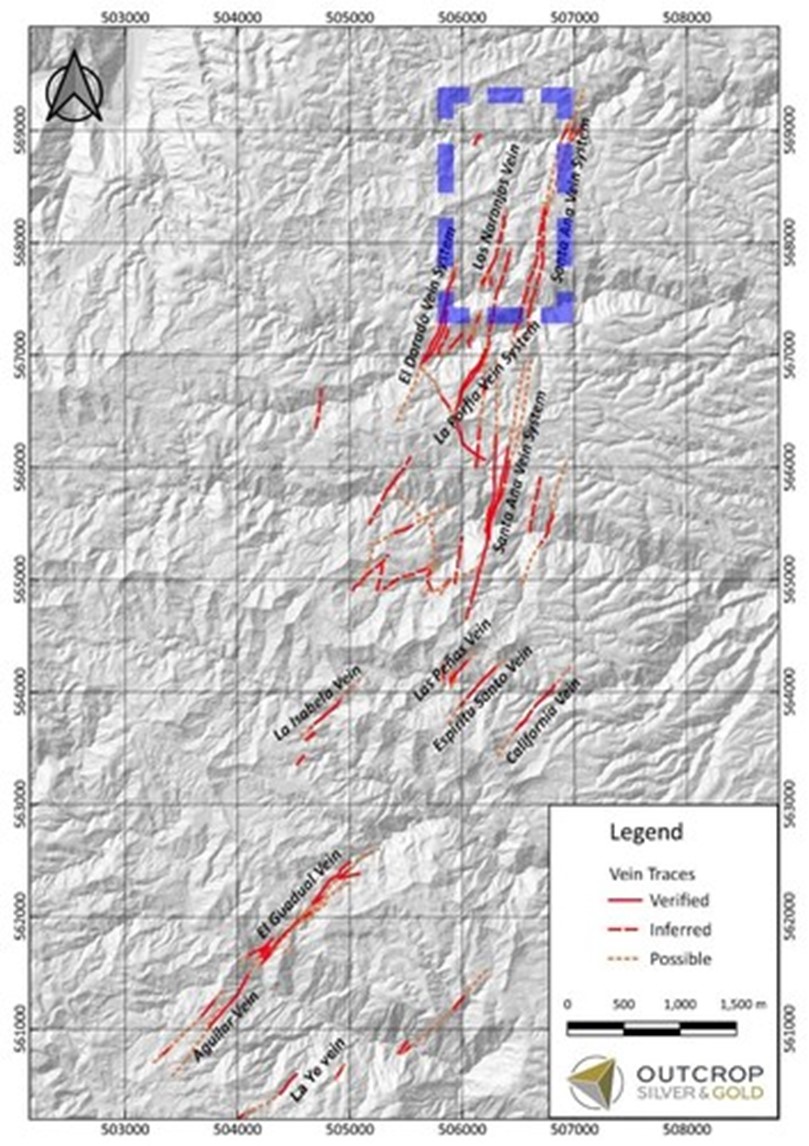 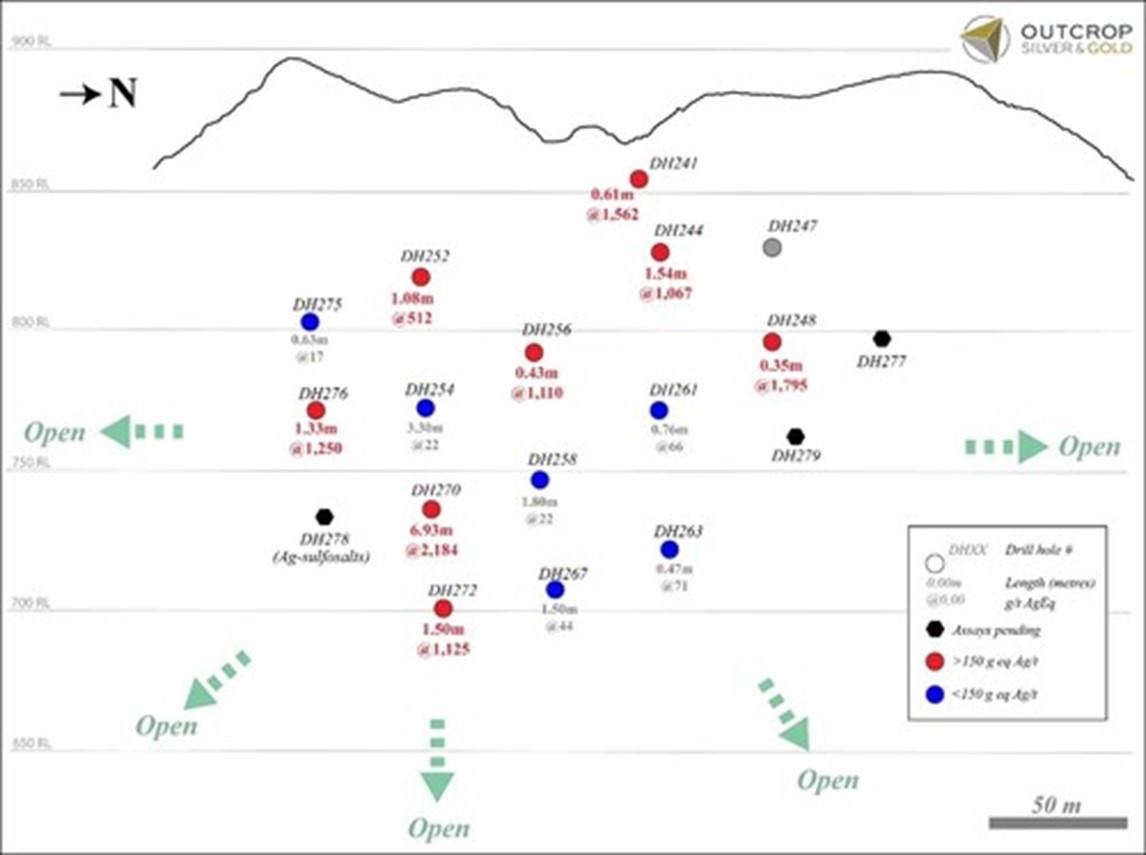