Preliminary shallow drilling in Megapozo totals 560 metres in five holes. Significant workings were encountered in drilling, such that vein intercepts and their lengths are significantly underrepresented. An example is seen in drill hole 20DH22 where 2.25 metres of open workings occurs only 0.2 metres from a 0.4 metre vein intercept of 37.4 g Au/t and 1,220 g Ag/t. Drill hole 20DH25 contains a 3.49 metre working probably reflecting a mined vein of the same width. Drill hole 20DH23 appears to represent residual disarticulated vein material in a caved working such that the actual vein grade is diminished with waste material.

The average intercept thickness of workings is 2.15 metres and veins and workings taken together average 1.46 metres. Workings or veins were encountered in all five drill holes completed to date. Due to the numerous workings, Outcrop has secured a laser survey of a production shaft in Megapozo of 108 metres depth and has revised the drill plan to test Megapozo well below that level. Drilling is currently testing deeper projections of the Megapozo target Paraiso and Miraflores veins. Thicker and higher grades are anticipated from deeper and unmined projections of stacked veins. As is seen in La Ivana, primary veins such as Paraiso and Miraflores are accompanied by subsidiary closed-spaced parallel veins.

Outcrop plans to mobilize a second core rig to the project by September 1st to condense the planned exploration program and provide results over a shorter time interval. Approximately 9,000 metres remain to be drilled in this first phase of exploration. 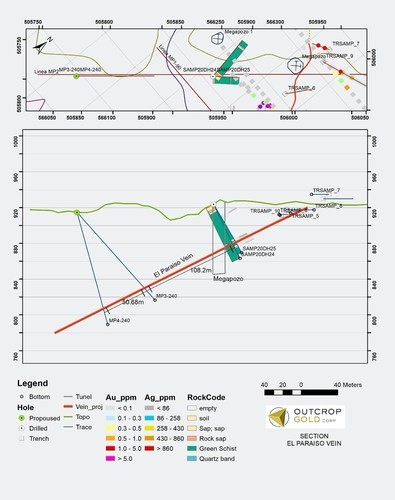 Figure 1: Section of Megapozo with drilled and planned holes and location of 108-metre-deep production shaft, where drilling is offset to test under workings. 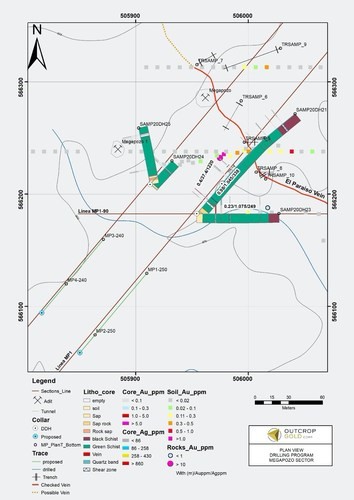 Outcrop is also advancing drill targets in other areas that include El Dorado. Trenching in El Dorado is favorable with ten samples greater than 1.0 g Au/t showing a range of 1.44 to 180 g Au/t and an average of 41.1 g Au/t with up to 1,500 g Ag/t over an average of 1.56 metres. Silver appears to be attenuated in the surface oxide zone. Trenching and soils in El Dorado provide a target footprint comparable to La Ivana discovery five hundred meters to the east.

At the core Santa Ana target, located at the northern extent of just one of the regional vein systems, at least eleven principle vein zones are recognized that cumulatively provide up to 14 km of cumulative strike length – La Ivana (La Porfia vein system), Roberto Tovar (Royal Mines, including the Santa Ana vein system), El Dorado, Morales, Pollera, Guanabanera, San Antonio, Palomos, Murillo, Culebra and Megapozo (El Paraiso vein system). The zones commonly each contain multiple parallel veins. The veins can show both high-grade silver and high-grade gold mineralization and may be both low and high angle depending on local controls.

Figure 1: Section of Megapozo with drilled and planned holes and location of 108-metre-deep production shaft, where drilling is offset to test under workings. (CNW Group/Outcrop Gold Corp.)