“Outcrop continues to be impressed with the exceptional size and grade continuity of the three high-grade shoots discovered to date on Santa Ana,” commented Joe Hebert, Chief Executive Officer. “All three high-grade shoots are open in two or more directions and show vein and grade continuity well below 300 metres down dip for both low and high-angle veins and remain open at depth.”

Importantly, before moving to El Dorado, a deep hole drilled in the La Ivana target intercepted a sulfidic vein at 450 metres down-dip from surface, which is 240 metres deeper than the current drilled extent of La Ivana vein. Although assays are pending for this drill hole, this shows the potential for significantly increasing the depth extent of high-grade shoots on the Santa Ana project.

Fifty-one holes have been completed for a total of 7,400 metres. Both El Dorado and Roberto Tovar have drill holes in progress and assays are pending for holes 47-51. An additional 4,600 metres is planned in this phase of exploration drilling, which is anticipated for completion in early Q1 2021.

For equivalent calculations $1,900 per ounce gold, $26 per ounce silver, $0.87 per pound lead and $1.08 per pound zinc were used. Intervals shown are drill intercept, true thickness are not yet calculated. Roberto Tovar holes CP1201 through CP1208 are historic holes drilled in 2012 but shown for context of current drilling. Drill holes 41, 42, 44, and 45 did not have significant intercepts defined as 200 g eq Ag/t. Hole 40 encountered 2.25 metres of historic workings.

At the core Santa Ana project, located at the northern extent of just one of the regional vein systems, at least eleven principle vein zones are recognized that cumulatively provide up to 14 km of cumulative strike length – La Ivana (La Porfia vein system), Roberto Tovar (Royal Mines, including the Santa Ana, Delhuyar and Roberto Tovar vein systems), El Dorado, Morales, Pollera, Guanabanera, San Antonio, Palomos, Murillo, Culebra and Megapozo (El Paraiso vein system). Each zone commonly contains multiple parallel veins. The veins can show both high-grade silver and high-grade gold mineralization and may be both low and high angle depending on local controls. Drilling indicates that mineralization extends from surface or near surface to depths of at least 300 to 450 metres.

Outcrop is a hybrid prospect generator active in Colombia acquiring gold and silver exploration projects with world-class discovery potential. Outcrop performs its own grass roots exploration and then employs a joint venture business model on its projects to maximize investor exposure to discovery and minimize financial risk. Outcrop has seven primary projects in Colombia with three at an advanced stage of exploration. Outcrop will conduct focused drilling on flagship properties such as Santa Ana to create its own catalysts for value creation. 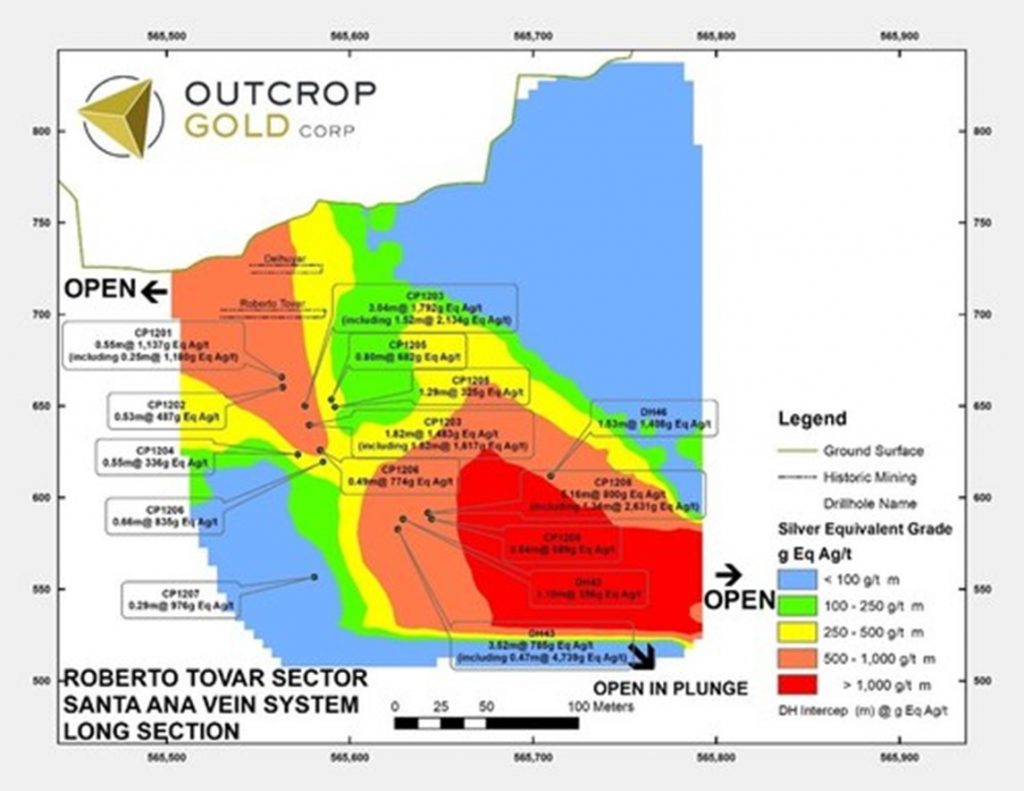 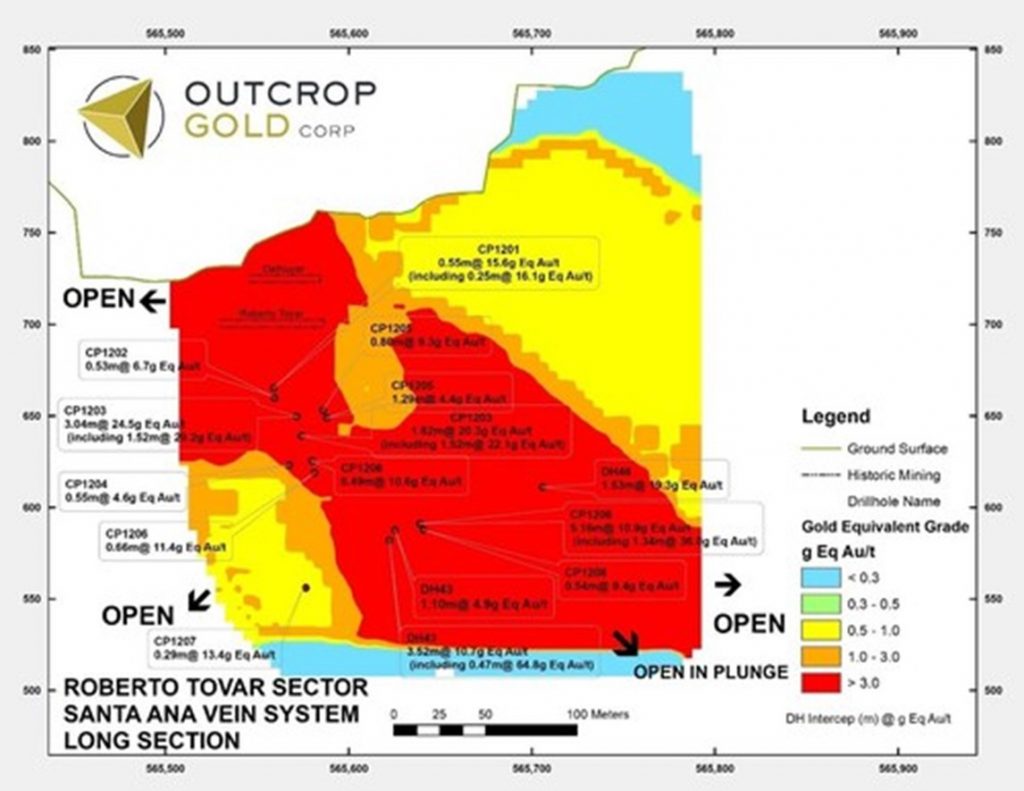 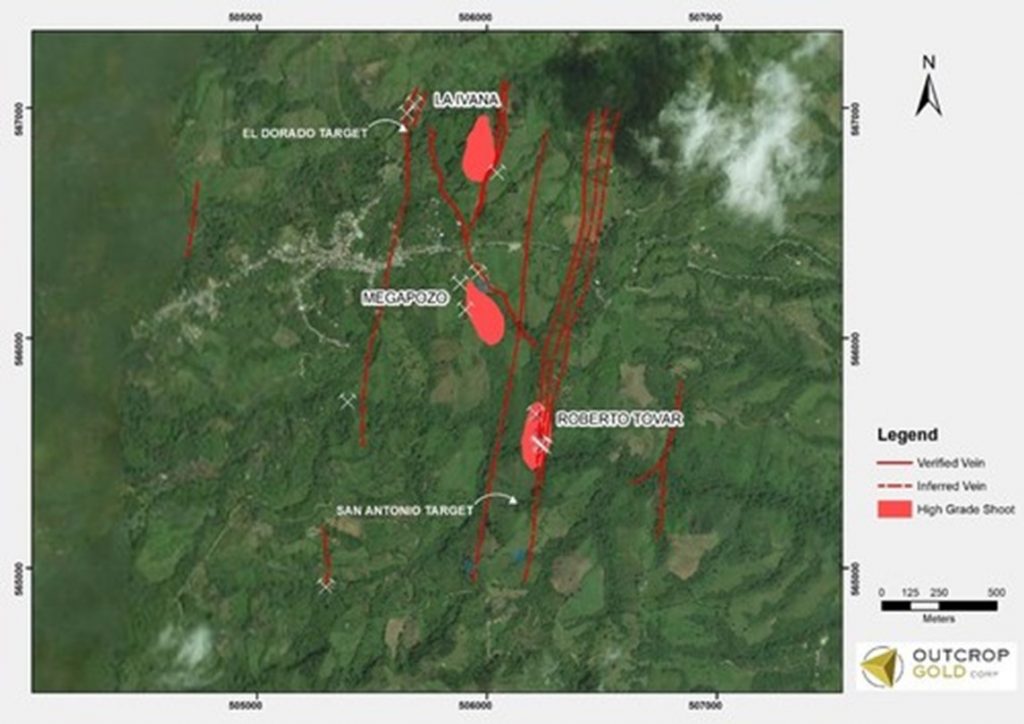