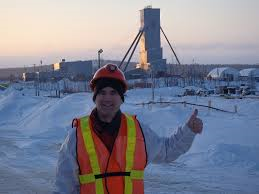 Osisko Gold Royalties Ltd. (TSX:OR) and Virginia Mines Inc. (TSX:VGQ) are pleased to announce that they have entered into a definitive agreement to combine the two companies to create a new leading intermediate royalty company with two world-class gold royalty assets in Quebec.

The transaction combines two top-quality, highly-complementary asset portfolios, including two long life revenue-generating gold royalties: Osisko’s 5% net smelter return royalty on the Canadian Malartic mine, and Virginia’s sliding-scale 2.2% – 3.5% NSR royalty on the Eleonore mine. Both the Osisko and Virginia royalties cover not only the operating mines, but also the high-potential land packages surrounding the mines.

Canadian Malartic achieved commercial production in May 2011, and is currently producing approximately 525,000 ounces of gold per year. First gold production was announced at the Eleonore mine on October 2, 2014. Eleonore will be ramping up to approximately 600,000 ounces per year by 2018, according to operator Goldcorp Inc. Currently at 2.2%, the Eleonore NSR royalty is 2.0% on the first 3 million ounces of gold production and increases by 0.25% for each additional million ounces of production. The NSR royalty is also subject to a 10% increase if the spot gold price is above US$500 per ounce (as is the present case). The NSR royalty rate is capped at 3.5%.

Upon completion of the combination, existing Osisko and Virginia shareholders will own approximately 61% and 39% of the combined company pro forma the concurrent private placements by la Caisse de depot et placement du Quebec and le Fonds de solidarite FTQ respectively, on a basic basis.

The combined company will be named Osisko Gold Royalties Ltd and will have an estimated market capitalization of C$1.3 billion, and will be headquartered in Montreal, Quebec.

Sean Roosen, Chairman and CEO of Osisko, stated: “The business combination of Osisko and Virginia creates a leading intermediate royalty company with the two most valuable royalty assets in the gold sector, both of which are located in mining-friendly Quebec. Shareholders of both companies will benefit from increased diversification, superior trading liquidity, a strong balance sheet and a heightened ability to compete for future growth opportunities in the royalty business. Our teams complement each other and we look forward to integrating their respective skillsets to fuel the future growth of our company.”

Andre Gaumond, President and CEO of Virginia, stated: “We are excited about combining our exploration and value creation expertise in Northern Quebec with the development and financial skills of Osisko. Combining the two best performing Quebec mining groups will create a strong Quebec-based “mining house” that is particularly important at a time when the Quebec government is promoting the development of the north through the Plan Nord initiatives.”

Upon closing of the transaction, the current Osisko board will be supplemented by Andre Gaumond and Pierre Labbe.

The definitive agreement includes a commitment by each of Osisko and Virginia not to solicit alternative transactions to the combination. Each company has agreed to pay a break fee to the other party of C$26 million under certain circumstances. In addition, each company has granted the other party a right to match a competing offer, and both sets of directors and officers have agreed to lock up their shares in support of the combination.

Full details of the business combination will be included in the joint management information circular to be filed on SEDAR and mailed to shareholders shortly.

The acquisition of Virginia shares did not take place through the facilities of any market for the Virginia shares. The Osisko shares issued to the vendors were exempted from the prospectus requirements pursuant to section 2.3 of National Instrument 45-106 – Prospectus and Registration Exemptions.

Osisko and Virginia have entered into binding subscription agreements with CDPQ and the Fonds for private placements into each company.

CDPQ and the Fonds will also be granted a combined 15% right to participate in all future royalty or stream transactions entered into by Osisko and Virginia.

The private placements described above are subject to Toronto Stock Exchange approval as well as the satisfaction of customary closing conditions.


Osisko is a gold-focused royalty and stream company whose cornerstone asset is a 5% Net Smelter Royalty royalty on the Canadian Malartic Gold Mine, located in Malartic, Quebec. The Company also holds a 2% NSR royalty on the Upper Beaver, Kirkland Lake and Hammond Reef gold exploration projects in Northern Ontario. The Company has over C$150 million in cash resources and a portfolio of investments in emerging exploration companies.

Virginia conducts its exploration activities over the vast, unexplored territories of Northern Quebec in order to create value for its shareholders while protecting the quality of life for both present and future generations. With a working capital position of C$46 million as at August 31, 2014, and a large area of mining claims in Quebec North, Virginia is among the most active mining exploration companies in Quebec. Strengthened by the discovery of the Eleonore project and more than 20 years expertise on the territory, Virginia’s exploration team is recognized as one of the best in Canada. Virginia also holds a 2.2% to 3.5% royalty in the Eleonore property.