Orsu Metals More Than Doubled the Footprint of Mineralization as Part of Grade Control Drilling Program at the Adit 5 Domain, Sergeevskoe Project, Russia

Orsu Metals More Than Doubled the Footprint of Mineralization as Part of Grade Control Drilling Program at the Adit 5 Domain, Sergeevskoe Project, Russia 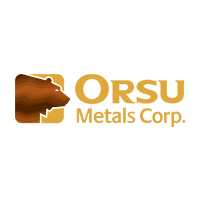 Orsu Metals Corporation (TSX-V:OSU) is pleased to report on progress of grade control drilling program at the Adit 5 domain of the Sergeevskoe Project as part of its ongoing preparation for pilot mining.

Dr. Alexander Yakubchuk, the Company’s Director of Exploration, commented: “We are encouraged by steady continuity of mineralization and consistent presence of higher grade gold material at Adit 5 that enabled to identify substantial amount of mineralization suitable for pilot mining.”

As of August 10, 2020, the Company completed 8842.3 m in 783 GC drill holes as part of the ongoing GC drilling program at the Adit 5 and Zone 23 East domains in the South open pit area of Sergeevskoe (see Figure 1). The main purpose of the GC drilling is to constrain the gold-mineralized bodies for the planned pilot mining program from mineralization previously estimated as part of the NI43-101 Inferred mineral resource (see press release January 20, 2020). 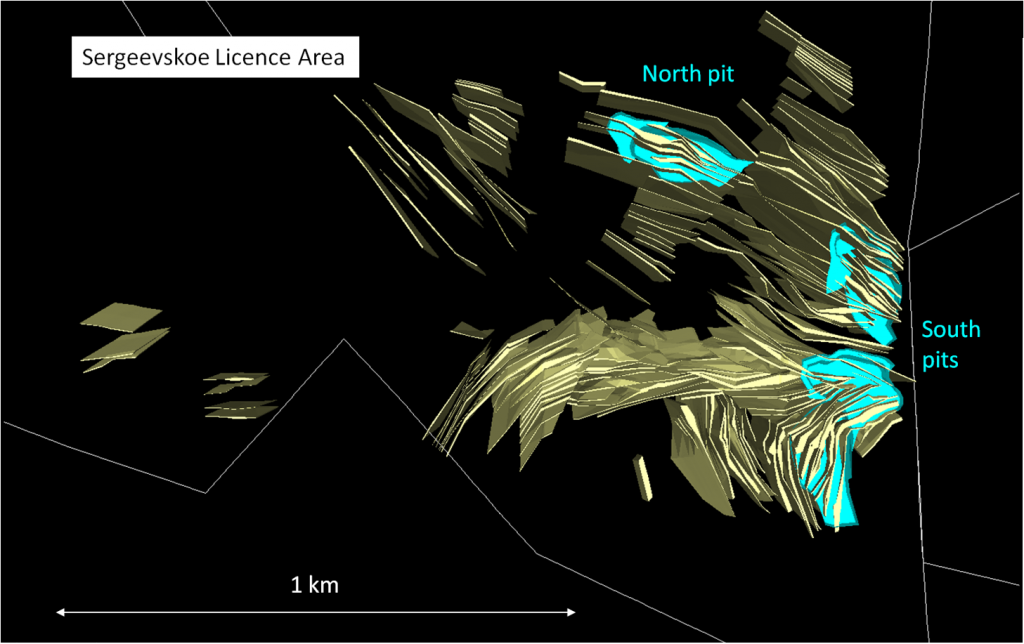 Figure 1. A plan view of the North and South pilot open pits against the mineralization wireframes at Sergeevskoe as per updated NI 43-101 Inferred Mineral Resource (see press release January 20, 2020).

In the Adit 5 domain, the ongoing GC drilling program covered two areas of 230×180 m in 23 northwest-oriented fences and in the Zone 23 East domain, GC drilling covered a smaller area of 150×30 m in 11 north-northeast-oriented drill fences, approximately 65% of the relevant pit area (see Figure 2). The distance between the holes in a fence is 2.5 m, with parallel fences located 10 m apart, with all holes at Adit 5 and Zone 23 East drilled at 60 degrees dip. All drilling was performed using rotary air blast drill rigs. The depth of drilling corresponds to the first mining bench from surface. Deeper GC drilling will be performed once near-surface material is extracted. All GC drilling was performed by an independent contractor under supervision of Orsu. Irrespective of lithologies, exact 1.5 or 2 m intervals were sampled consistently in all drill holes. Rarely, some intervals could not be sampled due to presence of water.

RAB holes were drilled along the fences to a vertical depth of 14-15 m, intercepting deeply oxidized and poorly consolidated both mineralized and unmineralized material that can be excavated even without blasting. Although drilling program is not complete, the drill spacing justifies confident and continuous tracing of 14 subparallel pinching and swelling mineralized bodies of curvilinear orientation in the best drilled part. The strike length of gold mineralization at Adit 5 domain reaches 240 m, although to the partly drilled northeastern part only eight bodies were identified so far (see Figure 2). Near the Shirotnyi Fault at the Zone 23 East domain, three to four west-east-trending mineralized bodies were identified, requiring further drilling. Overall, Orsu more than doubled the strike extent and width of the mineralized corridor since its previous report on progress of GC drilling program (see press release July 13, 2020). 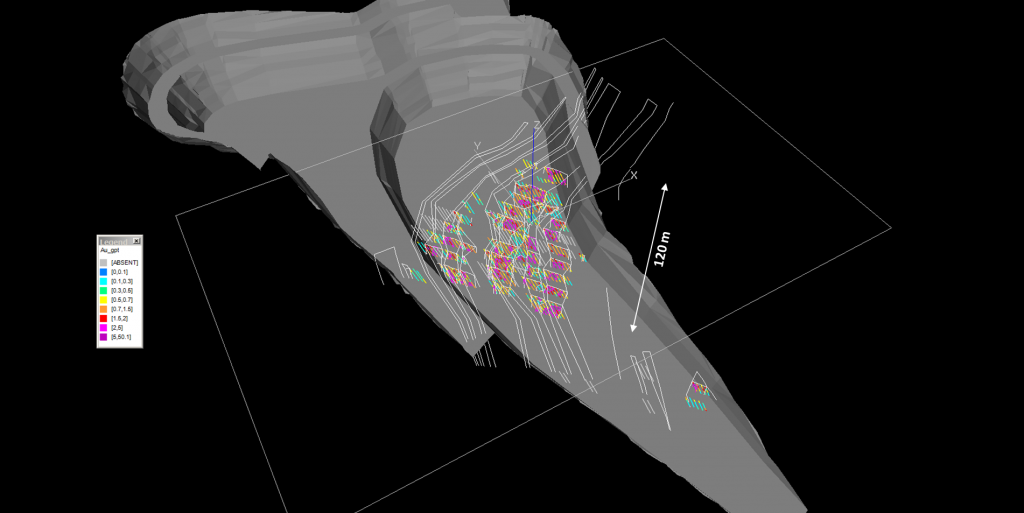 Figure 2. A northeast-looking oblique view of the Adit 5 portion of the South pilot open pit as reported on July 13, 2020 (left) and in this press release (right). Completed GC drill holes in 10-m-apart parallel drill fences were used to outline the +0.7 g/t Au mineralized bodies

As of August 10, 2020, the Company received assay results for 783 GC drill holes. The mineralized bodies are 2 to 15-20 m wide, reaching 35 m where they occasionally merge. Each body was intercepted by several closely spaced holes. Some gold bodies remain unconstrained.

The Company completed a preliminary in-house analysis of gold distribution in the mineralized bodies outlined at 0.7 g/t Au cutoff grade at the Adit 5 domain (see Figure 3), which is restricted to the depth of GC drilling and 5 m along the strike after the last drill intercept, therefore remaining open along the strike. The Company is planning to continue GC drilling to further outline gold mineralization at Adit 5 and Zone 23 East domains. 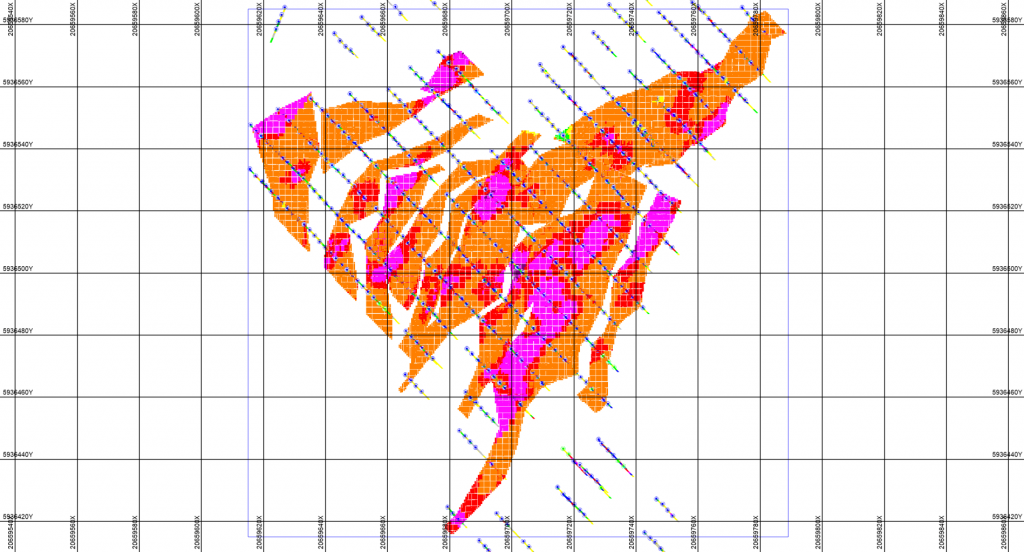 Fire assay analysis was performed at the certified analytical laboratory of the Alexandrovskoe gold mine, located 6 km to the west from the mineralized domains of the Sergeevskoe project. The laboratory is owned by Zapadnaya Gold Mining Company (http://www.zapadnaya.com/qa/alexandrovka.html), which is independent from Orsu. The detection limit of the laboratory is 0.1 g/t Au, with assay precision to 0.01 g/t Au. The laboratory included blank samples in the batches of 30 to 40 samples. The laboratory run random duplicate analytical tests of assayed material, averaging 20 samples.

In March 2020, the World Health Organization declared COVID-19 a global pandemic. This contagious disease outbreak, which has continued to spread, has adversely affected workforces, economies, and financial markets globally. It is not possible for the Company to predict the duration or magnitude of the adverse impacts of the outbreak and its effects on the Company’s business or ability to raise funds. The COVID-19 pandemic has not affected the progress of the ongoing exploration campaign on the Sergeevskoe Project as the Company is able to conduct its ongoing exploration in this remote area of Russia.

Orsu Metals Corporation is a mineral exploration and development company. The 90% owned Sergeevskoe gold project located in the Mogocha District of the Zabaikal’skiy Region of the Russian Federation is the focus of Orsu’s activities. Orsu has filed a technical report titled: “NI43-101 Technical Report on the Updated Mineral Resource Estimate for the Sergeevskoe Property, Zabaikalskiy Krai, Russian Federation” dated effective January 9, 2020 (the “Sergeevskoe Report”) to support the Inferred Mineral Resource of 30.42 million tons, grading 1.45 g/t gold and containing 1.417 Moz gold at a 0.5 g/t gold cut-off grade and US$1,450 per troy ounce of gold, optimized into an open pit constrained by the license boundaries at Sergeevskoe.

Alexander Yakubchuk, the Company’s Director of Exploration, Ph.D., MIMMM, a Qualified Person as defined by NI 43-101, has reviewed, verified and approved the exploration information disclosures contained in this press release.