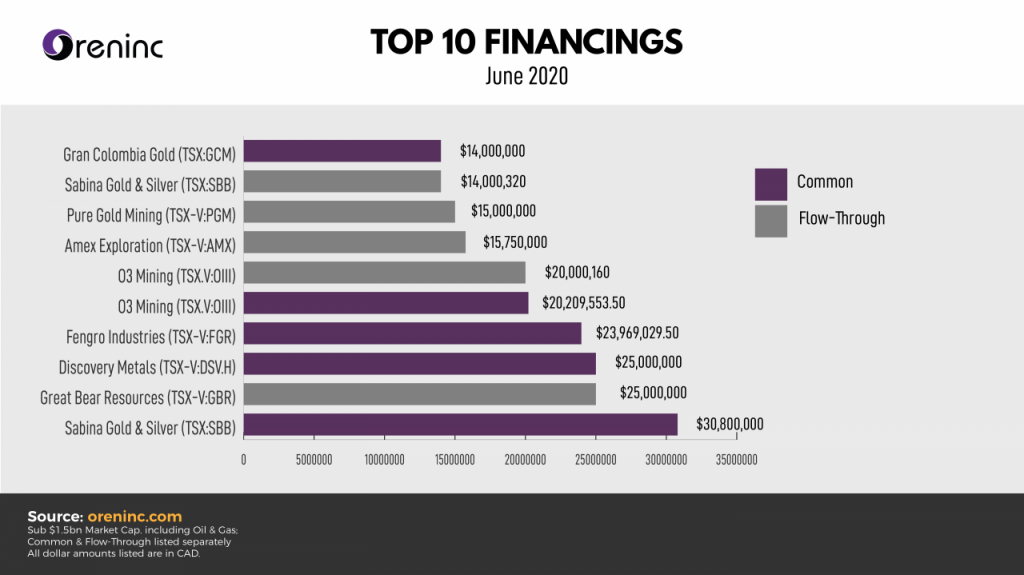 Gold accounted for eight of the top ten largest financings closed in Canadian capital markets in June, with silver and phosphate collecting the other spots. The top ten deals closed aggregated $203.7 million, a 40.7% fall from the $343.3 million closed in May, and representing 43.5% of the $571.5 million in deals closed. Sabina Gold & Silver led the way with a $30.8 million raise followed by Great Bear Resources ($25 million) and Discovery Metals Corp. ($25 million).

Raises for gold projects aggregated $373.9 million in June, some 74.7% of the total. Sabina Gold and Silver led the gold rankings in June with a $30.8 million raise followed by Great Bear Resources ($25 million) and O3 Mining (two separate raises totaling $40.2 million). The top ten yellow metal financings aggregated $178.5 million, a 12.1% decrease from the $203 million closed in May, and accounting for 31.2% of the total closed, with all ten financings of more than $10 million.

Base metals deals eased back with the top financings closed raising $25.7 million in June, 31.6% less than the $37.6 million closed in May, representing 4.5% of the total closed. Vizsla Resources led the way with a raise of $4.6 million, with no financings for more than $5 million.