ORENINC INDEX up but financings halve

ORENINC INDEX up but financings halve 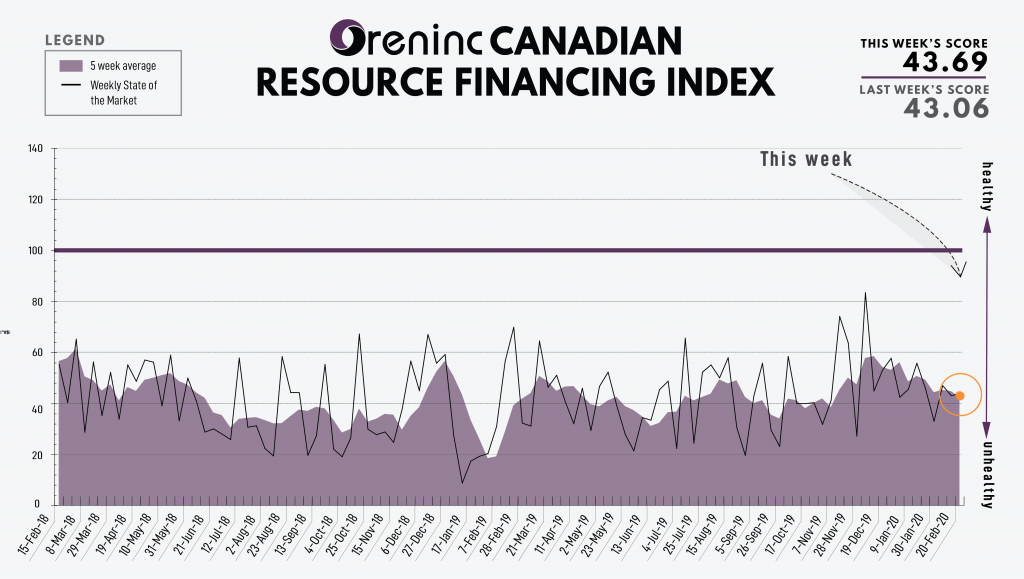 The Oreninc Index increased slightly in the week ending February 24th, 2020 to 43.69 from 43.06 a week ago although the number of financings halved

The touchpaper was lit under gold this week with the yellow metal powering to a seven-year high and honing-in on the US$1,650/oz level as safe-haven buying strengthens. At the same time, the US dollar has had its strongest yearly start since 2015 with the dollar more closely tracking stocks higher than falling with Treasury yields.

Deaths caused by the coronavirus in China have passed 2,200 with the number of afflicted over 75,000. Other Asian countries, particularly South Korea and Japan have reported a growing number of cases.

News of the economic impacts of the virus outbreak rolled-in throughout the week, as different industries are starting to experience the first effects of materials or component shortages. For example, car sales in China, the world’s largest market, falling 90% in February. Sportswear company Adidas said business has fallen 85% because of store closures in China. The industrial province of Hubei where the virus outbreak began is still locked down.

The government response to shore up the economy includes moves by the People’s Bank of China to provide medium-term lending for banks and reducing interest rates charged. The airline industry is likely to receive state assistance to compensate for lost revenues due to travel bans.

In the US, the Federal Reserve released the minutes from its January 28-29 meeting which stated the “current stance of monetary policy was appropriate” and indicating interest rates would be held steady at between 1.5% and 1.75% for the foreseeable future. The minutes indicated the Fed plans to wind up conducting daily repo operations and short-term T-bill purchases after April.