ORENINC INDEX up as the number of financings and dollars increased 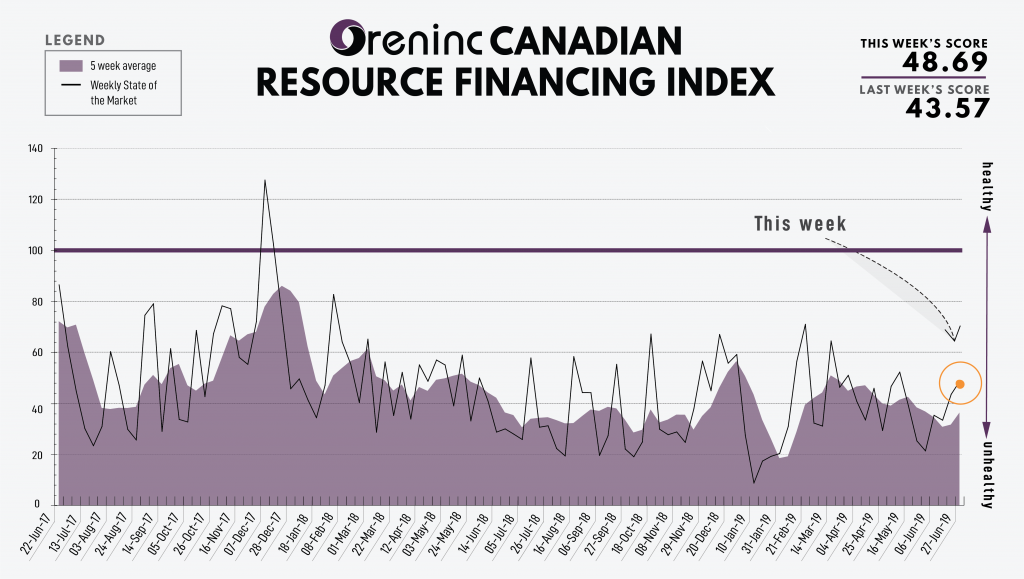 The Oreninc Index increased in the week ending June 28th, 2019 to 48.69 from an updated 43.57 a week ago as the number of financings and dollars increased.

Gold continued to shove continued strength as it held above the US$1,400/oz level leading many commentators to opine that if it holds at this level or above for another couple of weeks, it could be a springboard to much higher prices. After hitting a record level in Australian dollars last week it almost hit its highest point ever in Canadian dollars after hitting C$1,864/oz this week.

The gold price pushing higher has also seen it become a topic written about in mainstream media and not just the business pages. For example, the UK’s The Sun tabloid newspaper ran an article about how to convert old gold jewellery into cash.

Perhaps a better indicator of the growing strength of the gold price is that the yellow metal shrugged off the latest inflation numbers from the US Department of Commerce. The Core Personal Consumption Expenditures Index increased 0.2% in May meeting expectations while the core annual inflation rate remained unchanged at 1.6%, which some observers may lend support to the case for the US Federal Reserve to possibly cut interest rates in July. The gold price also shrugged of US Labor Department data as jobless claims rose by 10,000 to a seasonally adjusted 227,000. The four-week moving average for new claims increased by 2,250 to 221,250.

Vying with gold for headlines was the return of Bitcoin which has seen a meteroric rise recently and hit US$13,747 this week, its highest level since January 2018. It increased 40% this week alone and is up 320% since December and more than double what it was at the start of May.

On the political front, world leaders from the G20 group of nations are in Osaka, Japan for a summit meeting as tension between the US and Iran continues, and the trade spat between the US and China continues. US president Donald Trump met with his Chinese counterpart Xi Jingping and they agreed to resume trade talks.

A two-week strike at Codelco’s massive Chuquicamata copper mine in Chile is over after the company and unions came to terms. The stoppage is estimated to have cost the company some US$35 million due to lost production.