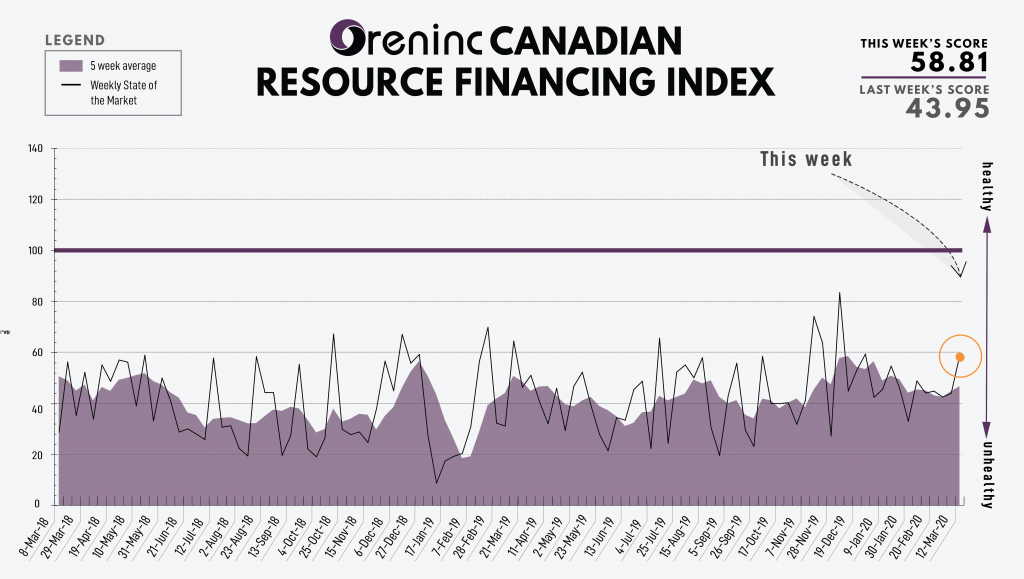 Soap and avoiding unnecessary social contact are your friends as there are now more than 145,369 cases confirmed and 5,429 deaths, but on the positive side of the ledger, 71,694 people have recovered, according to figures from Johns Hopkins University.

Italy has now had more than one thousand deaths and the country is on lock-down and US president Donald Trump imposed unprecedented travel restrictions including a 30-day halt on visitors from the European Union, which have been repeated by many Latin American countries including Colombia, Venezuela, Peru, Bolivia, Paraguay and Argentina. Guatemala is to ban arrivals from the US and Canada. Airlines including Delta and Lufthansa requesting financial aid.

Some delegates who attended the PDAC conference in Toronto a week ago have been infected with the virus, as has the wife of Canadian premier Justin Trudeau (who also attended the PDAC). Canada has shut down its parliament.

A growing number of conferences are being cancelled or postponed including the Zurich Gold Forum, the World Copper Conference and Expomin in Chile. Others will surely follow.

The bull market in US stocks came to a crashing halt as it marked its 11th birthday, with the S&P 500 and the Dow Jones indices dropping over 20% from their record peaks. They are now in a bear market as markets saw the biggest single-day selloff since the 1987 Black Monday crash. The nosedive from the February high took half the time of the 1929 crash—the previous record—, reported Bank of America. As investors sought an exit, the benchmark 10-year US Treasury yield fell to a record low of 0.387% Monday before recovering later in the week.

Markets began to steady after US president Donald Trump declared the COVID-19 outbreak a national emergency and opened up $50 billion of funds to state and local governments.

With central banks around the world promising action to support the economy. The European Central Bank left interest rates unchanged but announced measures to support the European economy including a new €120 billion asset purchase program for the rest of the year. The US Federal Reserve announced a liquidity package which could amount to more than US$5 trillion. The Bank of England cut its main rate by 50 basis points to 0.25% and launched a package of measures. Iceland and Norway have also reduced rates by 50 basis points.

In the metals space, the copper price fell to its lowest level in more than three years. The gold price has fallen about 5% in the past couple of weeks, feeling the pain as other asset classes have and not helped by the US Labor Department showed jobless claims falling by 4,000 to a seasonally adjusted 211,000.

With health and market issues dominating headlines, geopolitical news is passing under the radar such as Russian president Vladimir Putin looking to hold onto power past 2024 by backing a proposed constitutional amendment to allow him to seek another two terms, potentially until 2036.

With the world economy in slowdown, an oil war is brewing as Saudi Arabia, the world’s biggest oil exporter, is expected to ramp-up production in April when a three-year OPEC deal with Russia expires, which has sent oil prices plummeting to their lowest levels since February 2016. The production surge is reportedly in response to Russia’s refusal to back an OPEC plan to curb output, while others view it as a thinly veiled attack on the US shale oil industry.  Fuel represents about 25% of costs in an open pit mine and so miners will benefit from falling oil prices. But president Trump may have stopped the bleeding by instructing the Secretary of Energy to purchase large quantities of crude oil to fill the US Strategic Reserve “right up to the top”.

For the first time, the Oreninc summary is including the Chicago Board Options Exchange Volatility Index (VIX or fear index) which represents the market’s expectation of 30-day forward-looking volatility and derived from the price inputs of the S&P 500 index options. Historically speaking, a VIX below 20% reflects a healthy and relatively moderate-risk market while a VIX of greater than 20% signifies increasing uncertainty and fear in the market. This week the VIX closed up at 57.83 from 41.94 a week ago.