ORENINC INDEX up as financings jump

ORENINC INDEX up as financings jump 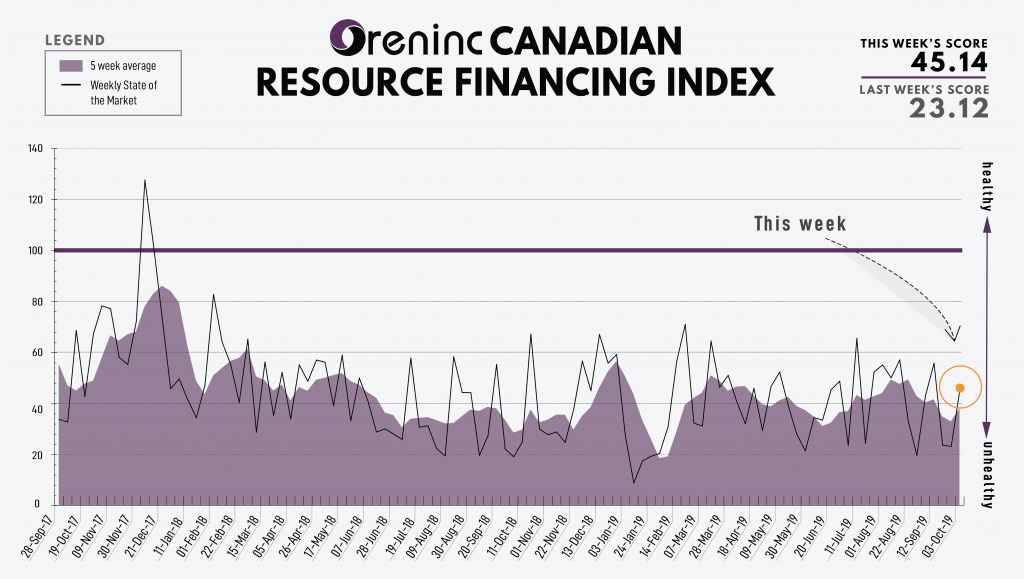 The Oreninc Index almost doubled in the week ending October 4th, 2019 to 45.14 from an updated 23.12 as the number of financings jumped.

A less exciting (volatile) week for gold as gold hovered around the US$1,500/oz level.

The week closed with the US Bureau of Labor Statistics reporting non-farm payrolls data and stating 136,000 jobs were created in September, fewer than consensus forecasts although the unemployment rate fell to a new record low of 3.5% down from 3.7%. This followed data from payrolls firm ADP earlier in the week which showed US companies added fewer jobs than expected and the US ISM manufacturing index falling to 47.8 in September from 49.1 in August, its lowest level since 2009 suggesting this US economy is slowing.

Earlier in the week, the US announced it would implement $7.5 billion of duties on European exports after the World Trade Organization ruled in favor of the US in a dispute over European Union support and subsidies for aircraft manufacturer Airbus. Tariffs from 10% to 25% were implemented on goods including whiskey, wine, cheese and aircraft components.

In Brexit news, UK prime minister Boris Johnson finally published his plan to address the Irish border issue, which was rapidly decried as unworkable by the EU. The question now is will he or won’t he ask the EU for another extension to postpone beyond October 31st the date when the UK may leave the block.

In Hong Kong, the four-month long pro-democracy protests continue with the police beginning to use live ammunition.