ORENINC INDEX up as financings fall

ORENINC INDEX up as financings fall 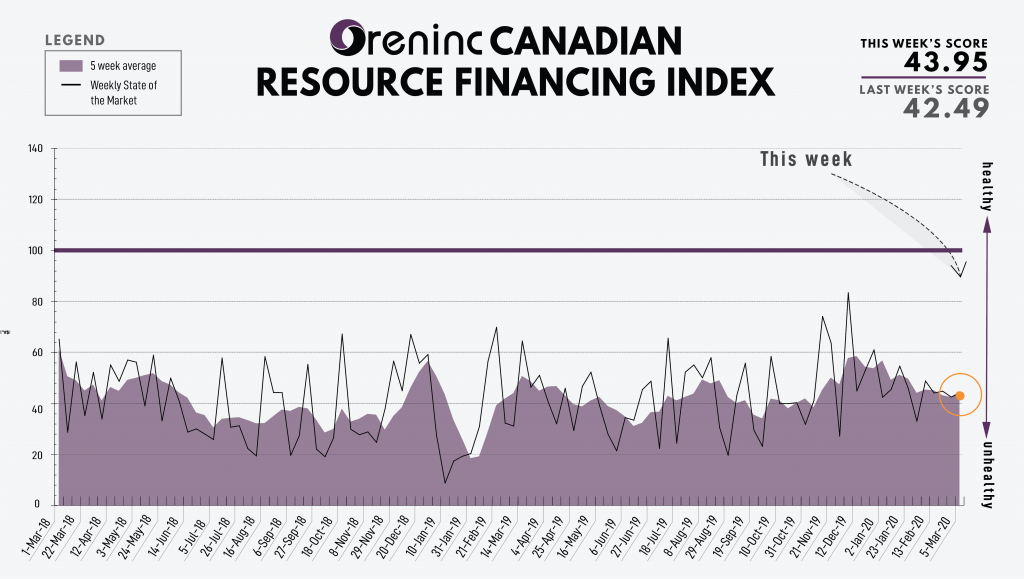 The Oreninc Index increased in the week ending March 6th, 2020 to 43.95 from 42.49 a week ago boosted by a large bought deal while financings in general fell.

The past week saw the PDAC conference in Toronto, the world’s largest exploration event and attendance was noticeably down as many companies and delegates did not turn up due to concerns about coronavirus, with official figures coming in at 23,000.

Concern is growing around the globe as the number of cases tops 100,000, global deaths exceed 3,200 and the first deaths in the US and UK, and first cases are reported in many other countries. Stock markets around the world are in crisis as a result of significant sells offs as investors move into treasuries.

Gold has been one of the beneficiaries of the flight to safety, especially as central banks around the world have pledged to take action to support the economy. In the US, the Federal Reserve announced a surprise 50 basis point (0.5%) cut in interest rates mid-week.

The bid for the Democratic party nomination heated up with the Super Tuesday of primaries held in 14 states. Notable casualties were Senator Elizabeth Warren and Michael Bloomberg who both dropped out after poor showings. The big winner was former vice president Joe Biden who won 10 of the 14 Super Tuesday states and it now appears that he or Bernie Sanders will win the nomination.

On to the money: total fund raises decreased a smidge to $61.8 million, a two-week low, which included one brokered financing for $38 million, a 13-week high, and no bought-deal financings. The average offer size almost doubled to $3.6 million, a three-week high, while the number of financings almost halved to 17.