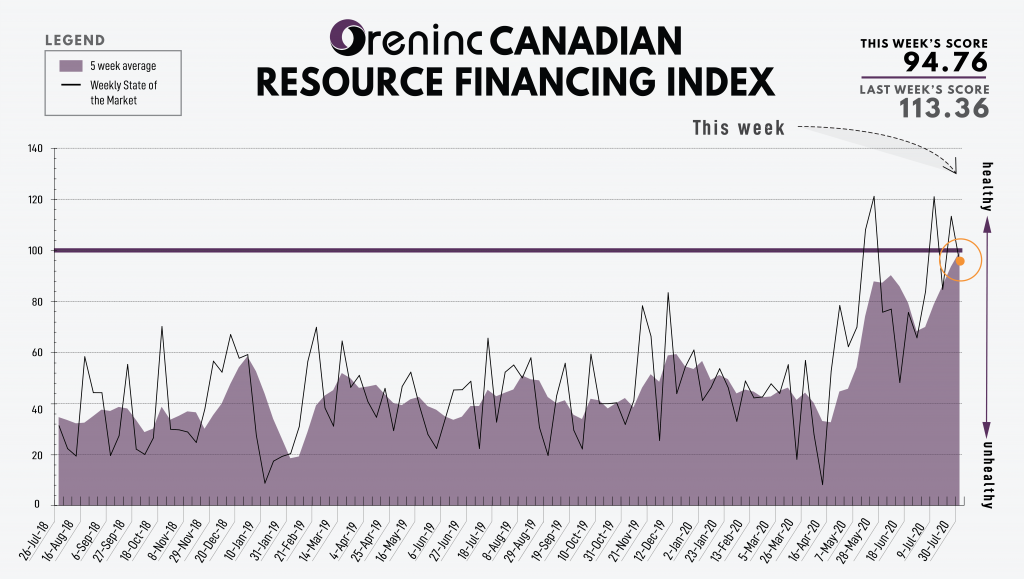 Another exceptional week for Canadian junior mining financings as the Oreninc Index increased in the week ending July 31st, 2020 to 94.76 from an updated 113.36 a week ago as brokered actions stayed strong.

Gold started the week strongly, powering past the US$1,921/oz high posted in September 2011 to more than $1,950/oz in a volatile week which saw profit taking by investors.

The COVID-19 virus global death toll has reached almost 700,000 with almost 18 million cases reported worldwide, as partial lockdowns return to parts of Europe and the USA. The US has seen a spike in deaths in Texas, Florida, Arizona and California, leading president Donald Trump to suggest delaying the November presidential election.

On the economic front, the US economy posted its worst quarter since World War II as GDP shrank by 32.9% between April and June, and 1.43 million people filed for unemployment benefits according to the Department of Labor. The four-week moving average for new claims was 1.36 million. Meanwhile, continuing jobless claims increased rose to 17.1 million.

Earlier in the week, the US Federal Reserve Open Market Committee made no change to interest rates or monetary policy, indicating future action will depend upon how the CVID-19 pandemic plays.