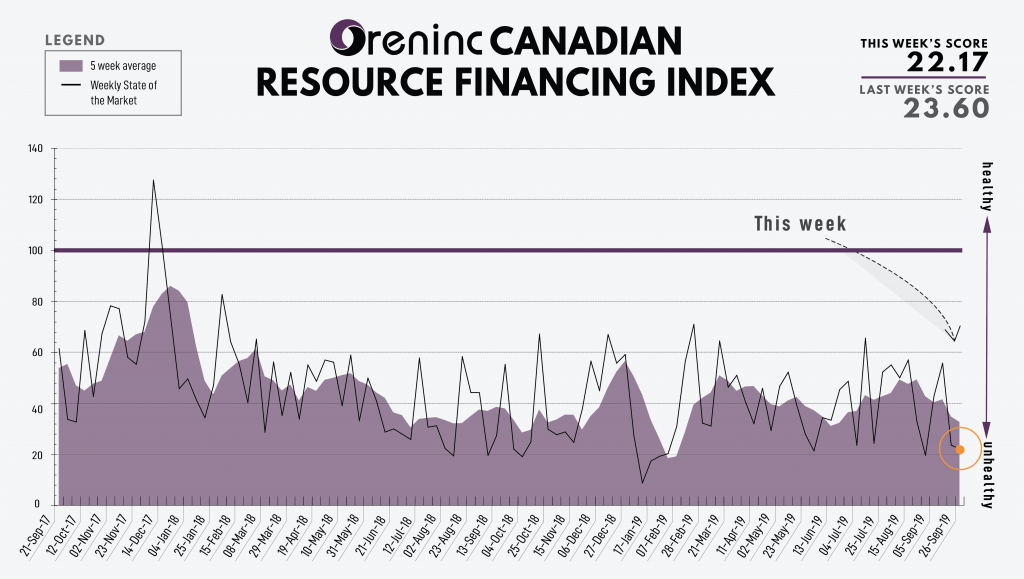 The Oreninc Index halved in the week ending September 27th, 2019 to 23.60 from an updated 55.75 as bought deals and brokered deals disappeared.

Gold wavered on profit-taking and a strengthening US dollar as financing activity slowed to a crawl.

On the trade front, while the US and China are due to sit down to talks in October, the US imposed penalties against some Chinese tanker firms for carrying Iranian crude after sanctions waivers lapsed in May. This development came after China granted companies waivers to buy between 2 and 3 million tons of US soybeans without being subject to retaliatory tariffs.

The Democrats are again looking at the possibility of impeaching US president Donald Trump, this time for a July call he made to Ukraine’s leader Volodymr Zelensky to allegedly seek information to discredit Democrat presidential candidate Joe Biden.

In the UK, the Supreme Court unanimously ruled that the decision by prime minister Boris Johnson to suspend Parliament until mid-October was unlawful.

Rubicon Minerals (TSX:RMX) opened a fully-marketed private placement to raise up to $12 million.

The identification of strongly anomalous gold and silver values is positive. When combined with historical reverse circulation drill data, they will help define new targets for drilling in 2020.

Melchett Lake has a multi-kilometre strike length of known areas of mineralization and the presence of high-grade values of precious metals and base metals and represents a strong exploration opportunity.