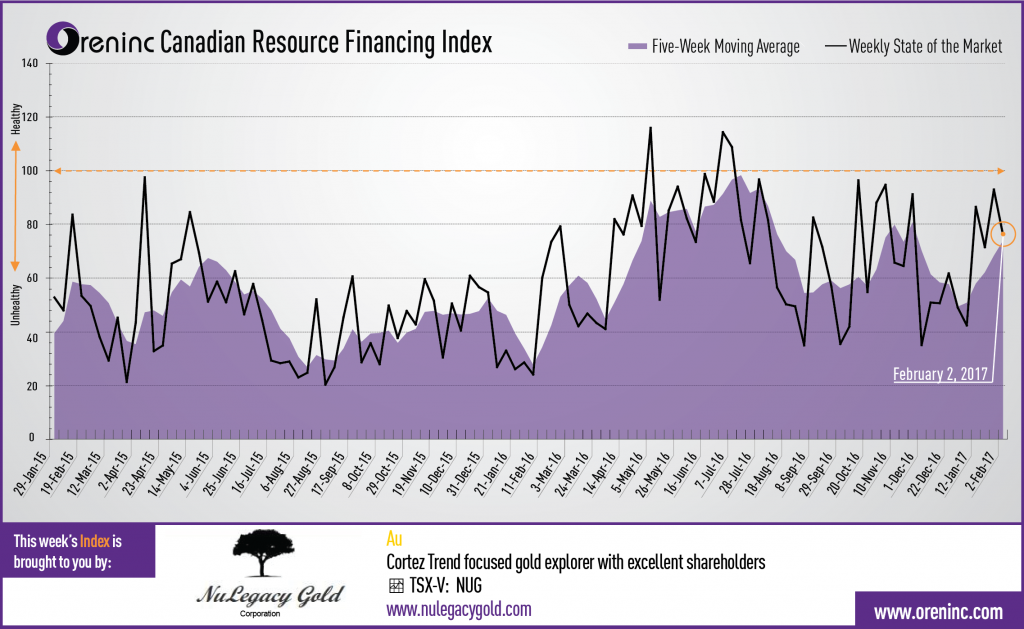 Total fund raising dollars announced fell to C$148.3m from C$233.5m, which included eight brokered financings for a total of $68.9m within which were five bought-deal financings for $57.1m. The average offer size fell from $6.5m to $3.5m.

Whilst the average dollar value per raise decreased, the total number of financings announced increased to 43. Reflecting the uptick in gold, the industry’s leading benchmark index, the van Eck managed GDXJ continued its upward trend and is now up 24.44% so far in 2017.

Whilst people around the world are protesting against some of the policies and executive orders that President Donald Trump is making, the markets continue to like what they see with the Dow Jones Industrial Average remaining over 20,000 and closing the week at 20,071 whilst the S&P/TSX Composite Index pulled back a smidge from last week’s record and closed at 15,467.

However, people power is beginning to produce effects amongst some big businesses:

Lithium continues to be a sector that pulls in investors and this week saw Neo Lithium (TSXV: NLC) announce a C$25.0 million bought deal financing with Sprott Capital. Neo has the Tres Quebrades project in Argentina, which has one of the highest grades and lowest impurity contents of any lithium brine salar in the world.

Also of note, Red Eagle Mining (TSX: R) announced a bought deal financing of C$10 million by a syndicate led by BMO Capital Markets that was quickly increased to C$15 million due to the strong demand for it. This financing is the first time for several years that the company has turned to the Canadian market for funding as previous recent raises to finance the construction of its San Ramon gold mine in Colombia that began production in late 2016 have been undertaken in Peru, with private equity groups and with its mine building contractor. One of the results of this raise could be that Red Eagle starts receiving analyst coverage on Bay St.