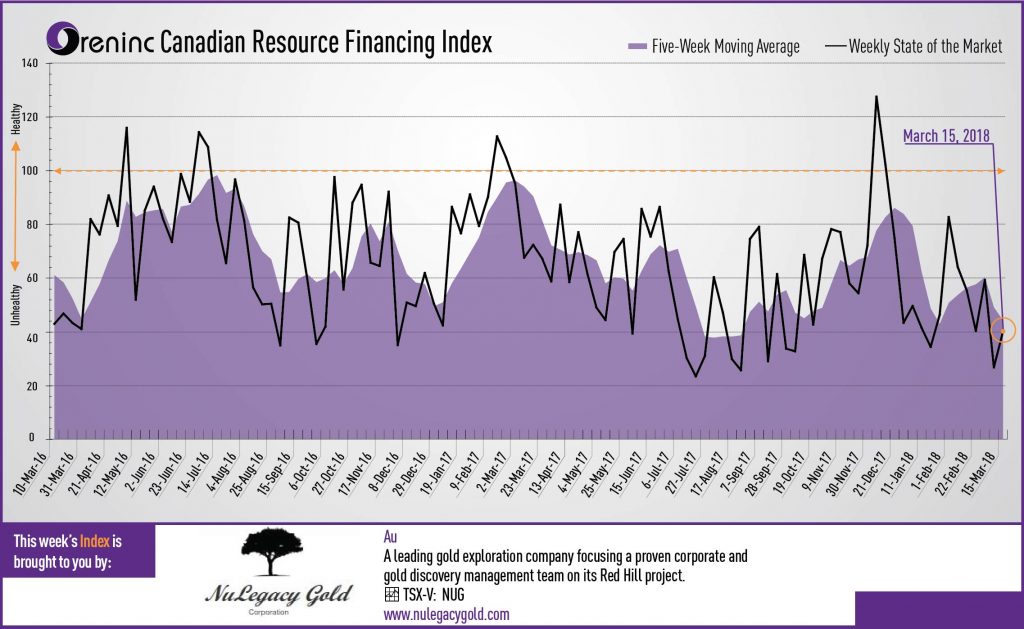 The Oreninc Index surged in the week ending March 16th, 2018, with the index increasing to 40.03 from 26.73 a week ago as financings, particularly brokered deals, began flowing again.

Despite strong fundamentals for precious and base metals, stocks continue to chart with insouciance. Certainly, cryptocurrencies and marijuana stocks have occupied some of the investor attention that would formerly have been doted on them.

A relatively quiet week on the geopolitical front, with a diplomatic spat arising between the UK and Russia over the poisoning of a former spy and his daughter in the UK. The UK has expelled Russian diplomats and Russia has returned the favour.

Gold experienced rolling punches throughout the week as rising inflation in the US could transpose into multiple interest rate rises throughout the year. The US CPI Index rose 0.2% in February following from a 0.5% increase in January, higher than expectations. Whilst a 25-basis point interest rate increase is widely expected at the Federal Reserve monetary policy meeting this week all ears will be on the tone of its comments about the potential for additional rises later this year.

Prospero cut new vein systems within 25km of one of the world’s great silver-gold districts that produced over 1.2Boz of silver. Hitting multi-ounce and multi-gram silver and gold grades during scout drilling bodes well for future follow-up drilling on the 6-7km of linear, structurally-controlled alteration at surface on its concession. Following completion of the proof-of-concept drilling, Fortuna now has the option to enter into a JV on one of the targets tested.