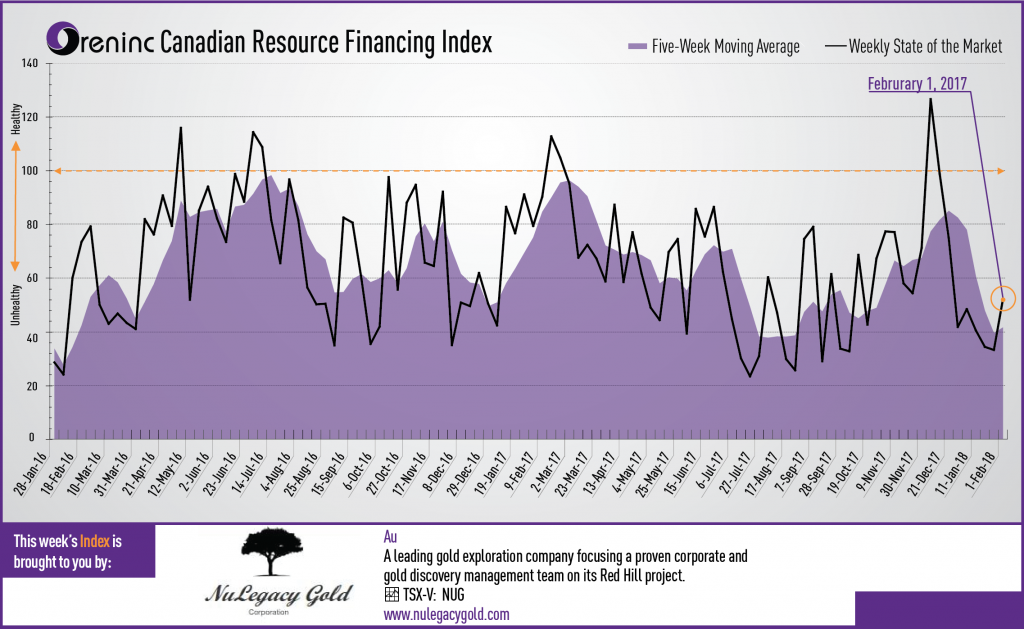 The Oreninc Index picked up in the week ending February 2nd, 2018, as some life returned to the market with the index rising to 52.08 from an updated 33.21 a week ago.

Gold’s recent six-week tear came to an abrupt end and a marked pull back occurred as profit taking and a market correction set in. A positive US Non-Farms Payroll jobs report at the end of the week followed the final meeting of the US Federal Reserve by outgoing chair Janet Yellen. These combined to give a favourable US interest rate outlook and US bond yields four-year highs.

Gold and gold miner investors saw this pullback as a value buying opportunity. Coupled with continuing weakness of the US dollar—and despite the US Federal Reserve looking at making another interest rate increase at its March conference, the outlook for gold remains bullish. The next couple of weeks are traditionally a good time for gold due to the lead up to the Chinese New Year.

A relatively quiet week on the geopolitical front in the wake of the Davos conference. Relative is the word as China suggested that the US should back away from what it called a Cold War mentality after Washington announced that it plans to develop smaller nukes to diversify its nuclear armoury. Apparently, the Trump administration thinks its nukes are too big to be used and therefore it wants to develop low-yield bombs.

Guerrero Ventures Inc. (TSX-V: GV) is pleased to announce that it... READ MORE