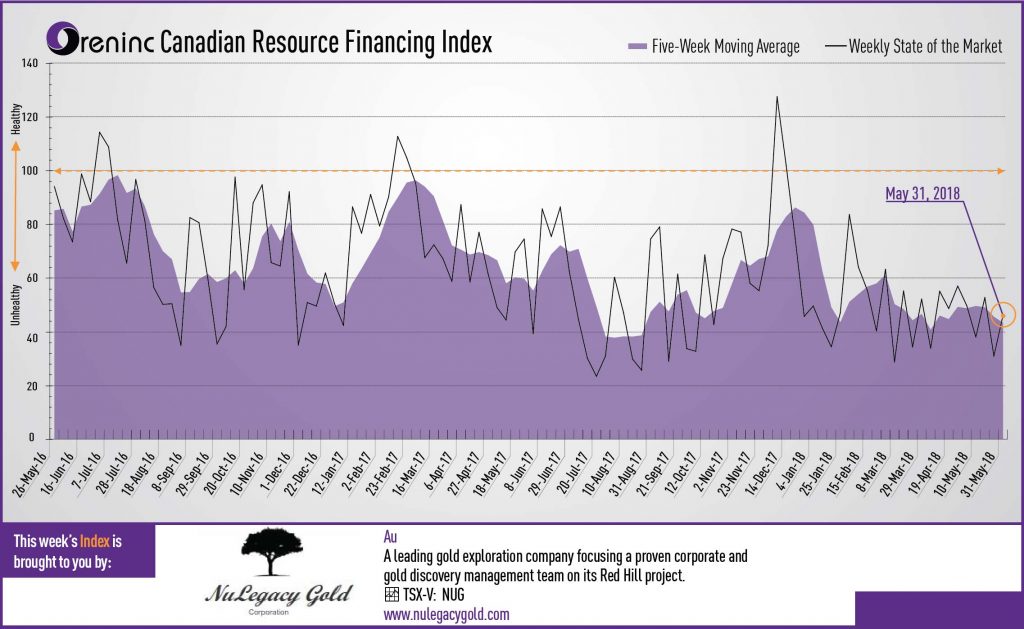 Zinc One Resources (TSXV:Z) announced additional results from its drill program at the southern area of the Mina Grande Sur zone, part of the Bongará zinc mine in north-central Peru.

The Oreninc Index increased in the week ending June 1st, 2018 to 45.96 from 30.90 a week ago as financings increased despite the absence of broker action.

Topsy-turvy times continue. Gold spent the week flirting with the US$1,300/oz level, before finally succumbing at the end of the week as the US added a higher-than-expected number of jobs in May. The US Labor Department reported that 223,000 jobs were added, over the 188,000 figure that were expecting.

Consciously or not, US president Donald Trump seems to be balancing the fear trade. As the week ended, he went ahead and implemented tariffs of 25% on steel and 10% on aluminium against production from the EU, Canada and Mexico, prompting fears of a trade war, whilst softening his trade tone against China. And then taking risk off the table by stating the talks are on again with his North Korean counterpart Kim Jong Un.

On to the money: total fund raises announced increased to C$92.7 million, a three-week high, which included no brokered financings and no bought deal financings. The average offer size fell to C$2.6 million, a four-week low whilst the number of financings increased to 35, a seven-week high.

Buenavista hosts precious metal-bearing, structurally controlled vein systems centered on a rhyolite dome complex. With Fresnillo plc’s recently commissioned San Julian mine 20km to the northwest the target is in the right neighbourhood. Indeed, previous drilling between 1996 and 2008 included intersections such as 2.37m @ 400g/t Ag & 0.27g/t Au. The antecedents for Buenavista are good but so there will be a lot of interest in the drilling results of the current program.

Zinc One Resources (TSXV:Z) announced additional results from its drill program at the southern area of the Mina Grande Sur zone, part of the Bongará zinc mine in north-central Peru.

The latest results continue to show that Bongará is an exceptional zinc-rich deposit, and the drilling results bode well for the upcoming resource calculation for the entire project. The company will be looking to repeat the positive results at the Mina Grande Centro and Mina Grande Norte zones.