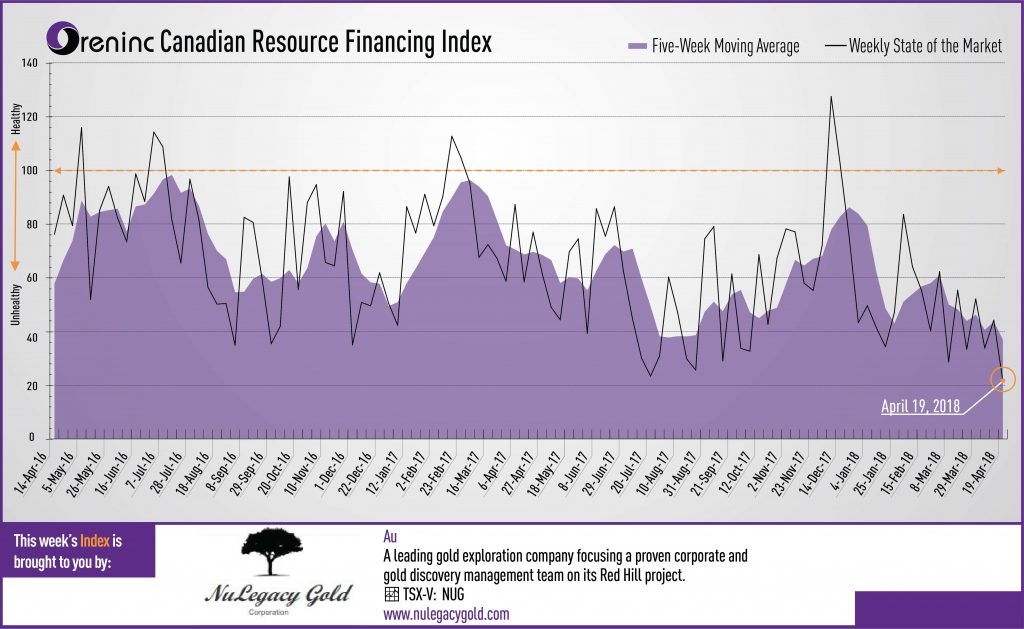 Prospero Silver (TSXV:PSL) announced a non-brokered private placement to raise up to C$1.0 million through the issuance of up to 11.1 million units @ C$0.09.

The Oreninc Mining Deal Club sent out its sixth financing alert to its subscribers. Sign up today to get the details and an opportunity to participate: www.miningdealclub.com

US tariffs and sanctions against steel and aluminium imports, particularly from Russia, are ripping through various metal markets with aluminium and nickel prices spiking. Aluminium prices have spiked 30% since the start of April to a seven-year high due to sanctions against Russia. Fears that supplies of steel-additive nickel could come into Trump’s crosshairs if more sanctions against Russian businesses and businessmen are rolled out has seen its price spike on the London Metals Exchange, recording its highest one-day move since 2008 and hitting three-year highs.

Another week of failed expectations for gold as strong performance throughout the week fell at the ned as the US dollar index strengthened following news that US initial weekly jobless claims dropped to 232,000, its lowest level in three weeks according to the Labor Department.

In other commodities, silver put in a growth spurt and despite losing some shine at the end of the week closed up at US$17.11/oz from US$16.65/oz a week ago wit ha mid-week high of US$17.24/oz. Coppers price growth continues and closed up at US$3.15/lb from US$3.07/lb from US$3.05/lb last week. Oil continues to post gains to close up at US$68.40 a barrel from US$67.39 a barrel a week ago. This puts its price back to levels levels last seen in December 2014. Despite US president Donald Trump saying the oil price is getting too high, it looks set to go higher as OPEC and Russia look to maintain supply restraint, even though surplus oil has largely been worked out of the system.

Prospero Silver (TSXV:PSL) announced a non-brokered private placement to raise up to C$1.0 million through the issuance of up to 11.1 million units @ C$0.09.

With the initial phase of its strategic arrangement with Fortuna Silver drawing to a close, and 2018 exploration planning underway, Prospero is raising cash to be able to contribute to funding ongoing and future exploration work under the arrangement. However, given the current low stock price, it is evident that the company is also looking to minimize shareholder dilution by undertaking a minimum raise. 2018 work will look to continue to validate Prospero’s exploration strategy to discover blind epithermal systems.