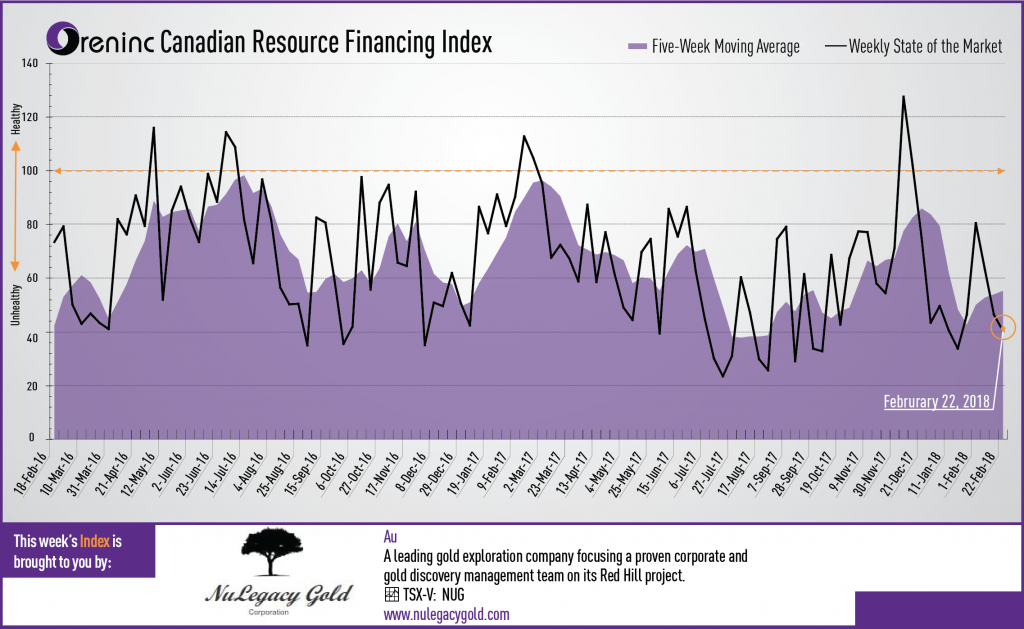 Meet the Oreninc and the Mining Deal Club Team at PDAC 2018. You can find us at booth #3010. Make sure to stop by. We are also raffling off a rare find in North America – Monkey 47 Gin from Germany’s Black Forest.

Zinc One Resources (TSX-V:Z) received results from the final batch of surface and pit samples at its Bongará zinc mine project in north-central Peru.

The Oreninc Index fell in the week ending February 23rd, 2018, with the index falling to  40.31 from 46.39 a week ago as financings continued to be scarce as Canada saw a four-day week as much of the country took Family Day. Only 13 deals opened during the week, which was the second in a row that there were more closings than openings. The dearth of financings is even stranger considering that the PDAC (Prospectors and Developers Association Conference), the largest mining show in the Americas, is just a week away.

The past week was quieter than recent weeks, with reduced volatility as markets stabilised somewhat. Gold was held back by a strengthening US dollar boosted by continued gains by US treasuries. Gold stocks continue to lag gold with some commentators pointing out the existence of a giant disconnect between the price of gold and the stock prices of the miners. This despite many miners posting very healthy profits, paying down large chunks of debt and having more than enough left over to reinstate juicy dividend policies, for example Glencore (LSE:GLEN).

One market sub-sector that does appear to be healthy is lithium, which accounted for five of the 21 closings (some C$24.9m of the C$73.5M total closing dollars, or 33.8%).

The Dow Jones Industrial Average continued to recover from its recent battering to close up at 25,309 from 25,219 last week. Likewise, with Canada’s S&P/TSX Composite Index that closed up at 15,638 from 15,452 the previous week. The S&P/TSX Venture Composite Index saw a slight pull back to close down at 826.09 from 830.17 last week.

Zinc One Resources (TSX-V:Z) received results from the final batch of surface and pit samples at its Bongará zinc mine project in north-central Peru.

The sampling was consistent with historical legacy information and confirmed high-grade zinc results throughout the 1.4km trend of surface and near-surface zinc mineralization. The drill program that is underway will add thicknesses data to the reas of mineralization at Bongarita, Mina Chica, and Mina Grande.