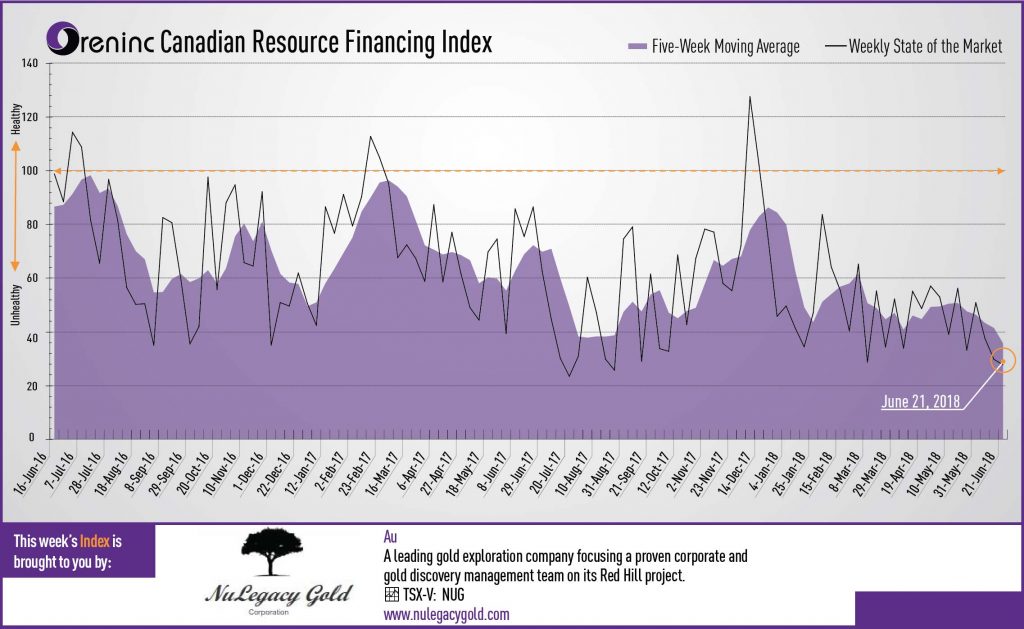 The Oreninc Index fell in the week ending June 22nd, 2018 to 27.68 from 29.73 a week ago as the financing drought continued as the summer market doldrums get underway.

Escalating trade tensions and imposition of tariffs between the US and China, the EU, India—well, almost everyone else really—continued to rock commodity prices, seriously denting copper’s recovery, and seeing a sell-off in the general stock market. The US implemented some US$50 billion of new tariffs against China and China said it will respond in kind, to which US president Donald Trump warned of even more tariffs if it did.

With the US Dollar Index continuing to show a strengthening tendency, the fear trade in gold that many commentators say will be a natural response to a trade war has yet to materialise, but gold stocks have been resilient in the face of the fall in the price of the yellow metal, indeed, the past week saw multiple M&A deals announced. However, the week ended with gold strengthening and the US dollar weakening but will this continue into the week ahead.

The past week saw OPEC members meet in Vienna, Austria with the oil ministers finally agreeing to increase output, as wanted by Russia and Saudi Arabia despite the reluctance of Iran, Iraq and Venezuela.

On to the money: total fund raises announced fell to C$32.44 million, a 15-week low, which included no brokered financings and no bought deal financings. The average offer size plunged to C$1.2 million, a 15-weel low, whilst the number of financings increased to 25, a two-week high.