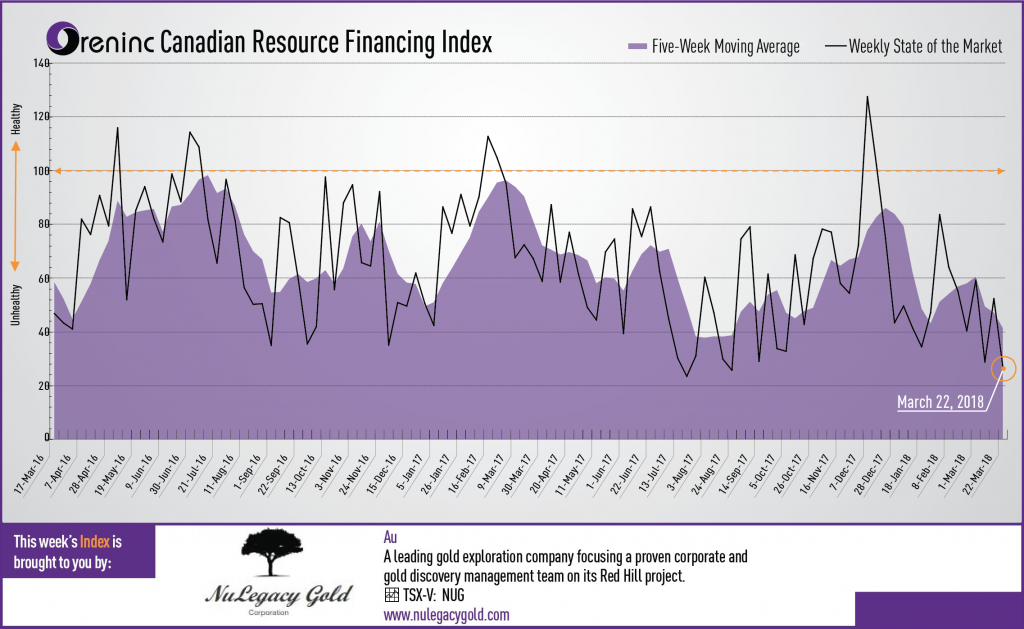 Before diving into our financing and Oreninc Index section, we would like to inform you that we have added some exceptional new content to our website and YouTube channel in recent days. We have conducted several interviews with the likes of David Erfle, Mickey Fulp, Gwen Preston, John Kaiser, Brent Cook, Joe Mazumdar and Jayant Bhandari during PDAC 2018, discussing the overall market sentiment, financing environment and much more. We have also filmed Joe and Brent from Exploration Insights talking rocks and geology with Trey Wasser of Ely Gold, Kevin Heather of Regulus Resources and Morgan Poliquin of Almadex Minerals.

Also, stay tuned for over 50 CEO Elevator pitches as we are uploading them to YouTube and Oreninc.com.

Now, back to business!

The week was full of news that was generally positive for gold led by the US Federal Reserve’s latest monetary policy decision that confirmed the long-expected interest rate increase, but more importantly, the Fed indicated that it will only make three rate increases this year. Gold surged on this news, putting in one of its strongest weeks for nearly two years.

This news was compounded by action on the geopolitical front as US president Donald Trump announced a US$50-60 billion trade tariff package aimed squarely at China, causing fears that a trade would could result.

The Dow Jones Industrial Average took a hit from president Trump’s China tariffs announcement, shedding more than 1,000 points to close down at 23,533 from 24,946 last week. Likewise, Canada’s S&P/TSX Composite Index took a nose dive to close down at 15,223 from 15,711 the previous week. The S&P/TSX Venture Composite Index also closed down at 817.80 from 833.67 last week.