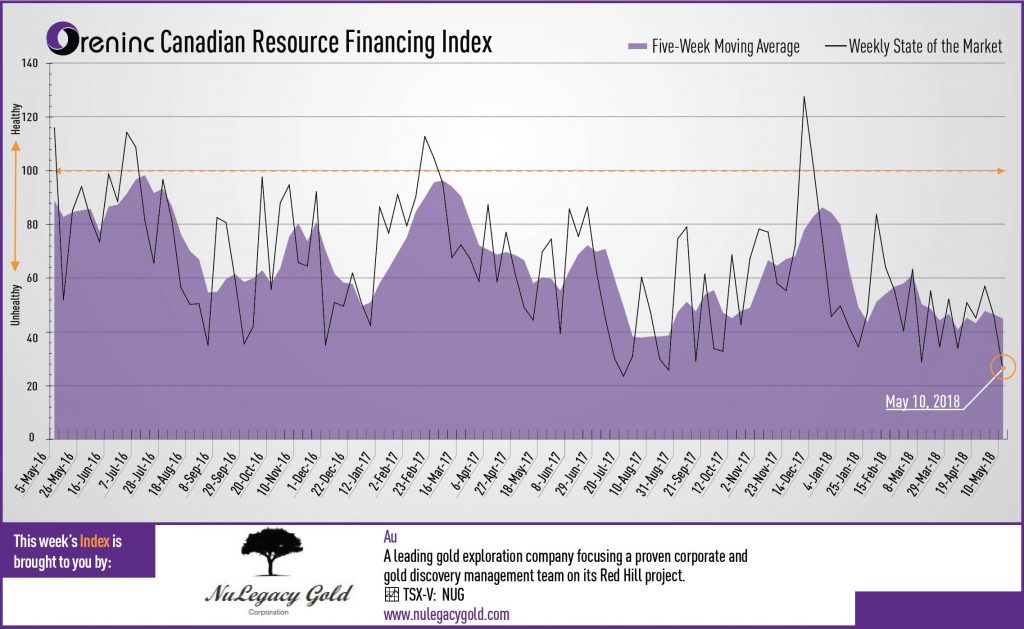 NuLegacy Gold (TSXV:NUG) began drilling on its Red Hill in the Cortez gold trend of Nevada.

Zinc One Resources (TSXV:Z) announced additional drill results from the Mina Grande Sur zone at its Bongará zinc mine project in north-central Peru.

Another quieter and less volatile week that saw gold steadily build momentum throughout the week only to lose it at the end. The US and North Korea agreed to meet at a landmark presidential summit in Singapore. Meanwhile, US president Donald Trump pulled the US out of the 2015 nuclear framework deal Iran and said that the US will continue to sanctions on the country and any company that continues to do business with it, it the ire of European countries.

On to the money: total fund raises announced fell to C$56.5 million, a seven-week low, which included no brokered financings, a five-week low, and no bought deal financings, also a five-week low. The average offer size grew to C$2.9 million, a two-week high although the number of financings fell to 19, a nine-week low. Whilst the dollars announced did not fall much from last week, the absence of broker action saw the Oreninc Index take a proportionally bigger hit.

West African Resources (TSXV;WAF) is to raise A$35 million to fund pre-development activities at its Sanbrado gold project in Burkina Faso.

The renewed commitment by Fortuna to test new targets is encouraging. The repricing and exercising of Fortuna’s warrants is a non-dilutive way for Prospero to secure more funding at a premium to market price for the planned work and removes warrant overhang from the stock.

NuLegacy Gold (TSXV:NUG) began drilling on its Red Hill in the Cortez gold trend of Nevada.

With a new season of drilling commencing following an extended winter break, the company is looking to step out from and grow the size of its existing discoveries as well as continuing to find new mineralized areas to increase the overall size and scope of Red Hill. The next couple of months should see regular news flow from the company.

Zinc One Resources (TSXV:Z) announced additional drill results from the Mina Grande Sur zone at its Bongará zinc mine project in north-central Peru.

This portion of the Mina Grande Sur drill program was designed to determine the extent of the mineralization so obtaining additional high-grade intersections is a bonus and attest to the robustness of Mina Grande Sur, which should be reflected in the upcoming resource calculation.