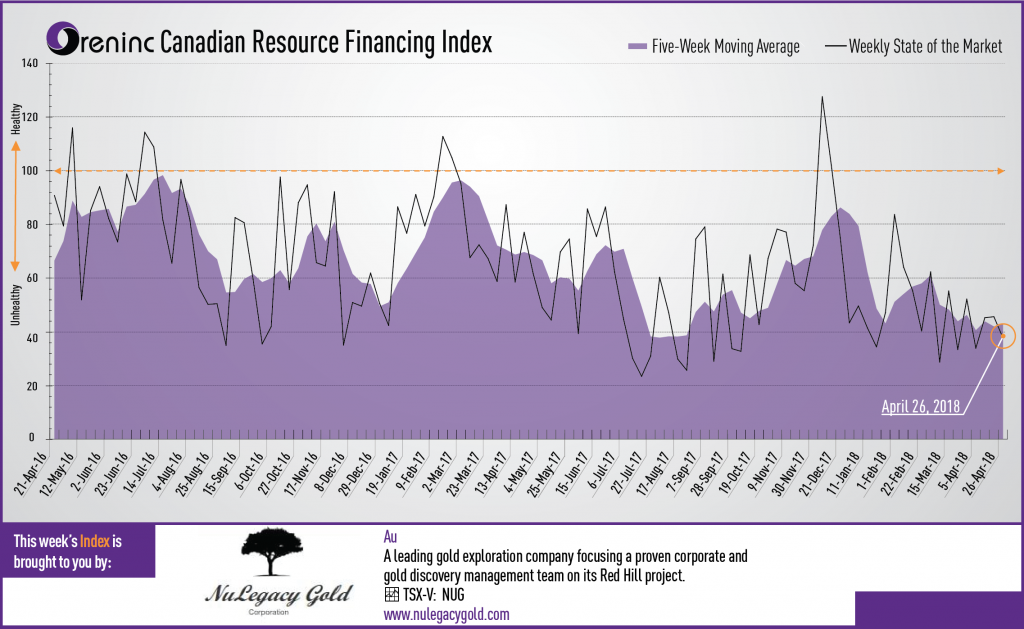 The Oreninc Index fell in the week ending April 27th, 2018 to 37.75 from an updated 45.59 a week ago as the number of deals fell despite some broker action returning.

A calmer and less volatile week all round with the presidents of North and South Korea meeting for the first time in decades, thawing tensions over the north’s nuclear ambitions, whilst in the US, president Donald Trump eased his position on sanctions against Russian aluminium producer Rusal. Maybe spring is in the air and the world is feeling more positive.

Another range-bound week for gold, this time ending in negative territory as the US dollar strengthened, although there are signs that gold stocks are starting to strengthen.

Prospero Silver (TSXV:PSL) provide an update on planned exploration work on its Mexican projects for 2018.

Having recently announced a fund raise, the work plan shows that Prospero will continue to drill test the targets it has identified via its geological hypothesis for discovering large, blind silver deposits. Whilst the news release did not explicitly state that its strategic partner Fortuna Silver (TSX:FVI) would co-fund this exploration program, that seems likely given the technical success of the 2017 exploration program and that Fortuna has yet to select a project to joint-venture under its strategic agreement with Prospero.