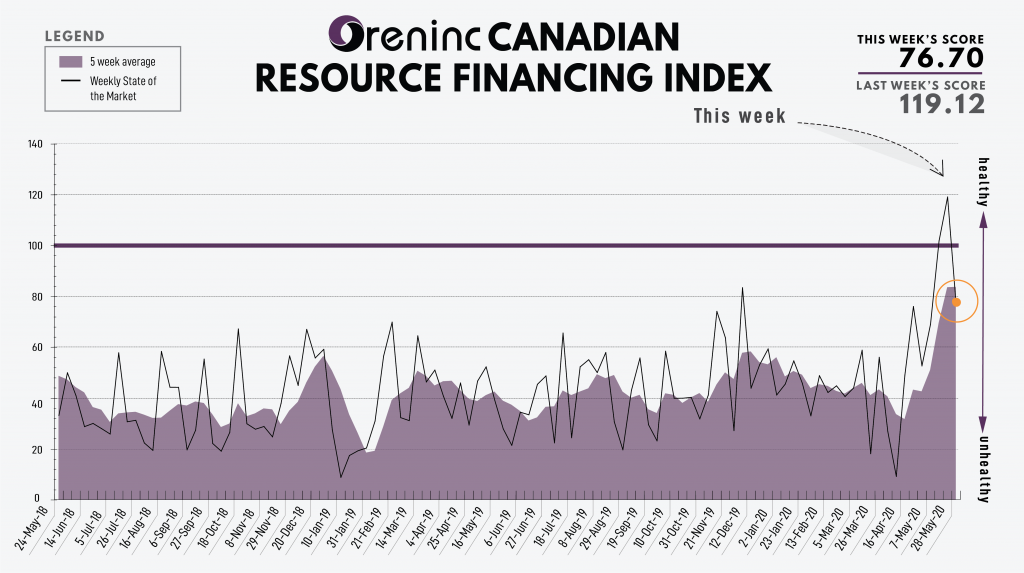 The Oreninc Index fell in the week ending May 29th, 2020 to 76.70 from an updated 119.12 a week ago although brokered action and the number of deals remained strong.

Geopolitics rose up the agenda as stronger words were exchanged between the USA and China focusing on the Asian nation’s imposition of national security laws in Hong Kong. For its part, the House of Representatives is pressing to sanction Chinese officials for human rights abuses against the country’s Uighur minority and members of other Muslim groups in the Xinjiang region.

On the economic front, US Federal Reserve chair Jerome Powell underscored the central bank’s commitment to bolster the economy throughout the COVID-19 pandemic, which many interpret as having to issue more debt and buying bonds and other securities.

Another 2.1 million people filed first-time unemployment claims in the US according to the Labor Department, bringing the total to more than 40 million since late March due to the COVID-19 crisis. Meanwhile, the Commerce Department reported that orders for durable goods in the US fell 17.2% in April, meaning orders have fallen in three of the last four months.

The economic picture is no rosier in Europe where European Central Bank president Christine Lagarde predicted that output is likely to contract 8-12% this year.” The European Commission is proposing to issue €500 billion in grants to member states hardest hit by the outbreak and some €250 billion in loans. Japan is also opening the purse strings with a stimulus package of more than $1 trillion.