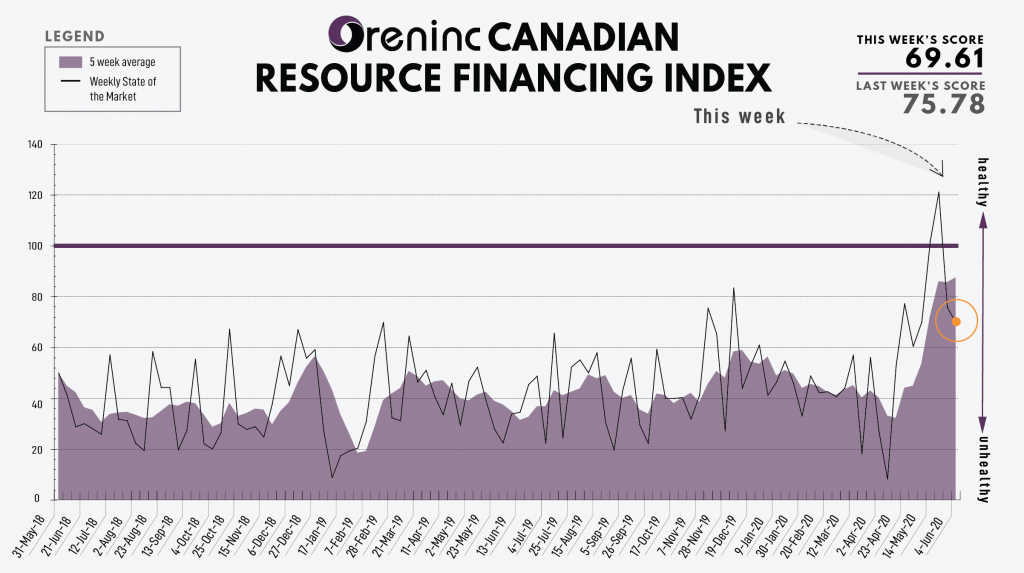 The Oreninc Index fell in the week ending June 5th, 2020 to 69.61 from an updated 75.78 a week ago although brokered deals are still in evidence.

An unexpectedly positive US jobs report saw precious metals sell-off as the stock market leapt higher on a wave of sentiment about economic recovery following the contraction caused by COVID-19. The Bureau of Labor Statistics said 2.5 million jobs were created in May flipping expectations of up to 7.75 million job losses. The report also said the unemployment rate fell to 13.3%. Earlier, the agency reported another 1.88 million people filing for first-time jobless claims bringing the total since March 21st to 40.77 million. Industrial raw materials such as copper and oil both benefited from this.

This was certainly better news than that issued by the Congressional Budget Office (CBO) at the start of the week when it stated the COVID-19 impact will wipe out US$7.9 trillion as it reduces economic output by 3% through 2030.

This news, however, was thrust into the background by the daily mass protests in cities across the country against the death of George Floyd at the knee of a police officer in Minnesota and the increasingly hostile and militaristic stance president Donald Trump is taking against the basic freedoms his citizens are supposed to enjoy.

The events of the past ten days are eroding the soft power the US has enjoyed as a beacon for democracy as the Trump administration continues a tense exchange with China over trade, currency valuation and more recently the suppression of freedoms in Hong Kong. Trump has ceded the moral high ground allowing China to reflect that what is good for the goose is good for the gander.

In Europe, the European Central Bank increased its emergency spending program by €600 billion to a total of €1,350 billion.