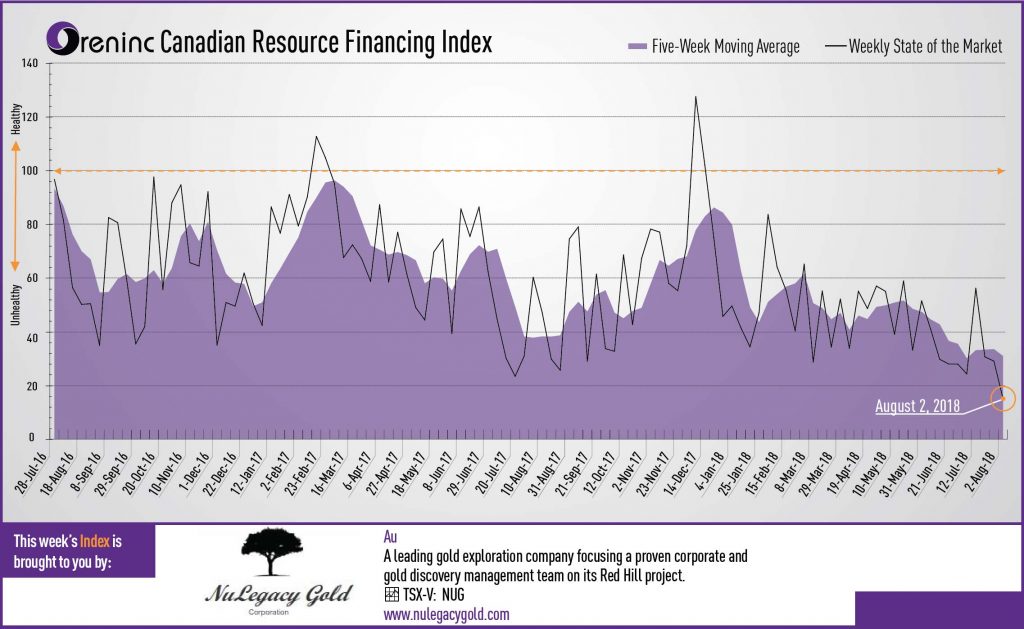 Zinc One Resources (TSXV:Z) announced additional drill results from the Mina Grande Sur zone of its Bongará zinc mine project in Peru.

The Oreninc Index enervated to almost nothing in the week ending August 3rd, 2018 as it fell to 15.22 from an updated 29.06 a week ago as peak summer vacation season in North America and Europe means investor interest is elsewhere. And interest is likely to remain on vacation until US Labor Day in early September.

It was a relatively quiet week on the geopolitical front and with heat waves in North America and Europe that may well have been a good thing and a welcome respite.

The gold price was insouciant following the US Federal Reserve FOMC meeting mid-week after the committee made no changes to interest rates or Federal Reserve policy, not that any were expected. The Bank of England, however, raised rates by a quarter of a percentage point, from 0.5% to 0.75%, to the highest level since March 2009.

The US Dollar Index remains near its 52-week high, which together with the summer heat, has seemingly hard-baked a price environment that gold cannot yet break through, as the yellow metal slumped to a 16-month low. A glimpse of respite came in the shape of the US Bureau of Labor Statistics non-farm jobs report for July missing expectations at the end of the week with a significantly lower-than-expected rise of 157,000 jobs compared to a 190,000 forecast. Meanwhile, the US unemployment rate dropped to 3.9%.

Bloomberg published an article about the impact of the escalating trade war on the global economy focusing on metal prices as a bellwether for growth in world gross domestic product. It said that the Bloomberg Commodity Index, which measures returns on 22 raw materials from aluminum to zinc, dropped more than 10% from May through July for its sharpest decline over a comparable period in more than two years. This was the period during which the US implemented tariffs on US$34 billion of Chinese goods and threatened a further $500 billion of imports, and China struck with tariffs of its own. Similarly, data from the London Metal Exchange show that a basket of six industrial metals fell 11% in the first seven months of this year.

On to the money: total fund raises announced fell to C$16.3 million, a 21-week low, which included no brokered financings and no bought deal financings. The average offer size increased to C$1.1 million, a two-week high, whilst the number of financings plunged to 14, also a 21-week low.

In other commodities, silver saw a few cents growth to close at US$15.42/oz from US$15.51/oz a week ago. Despite the growing threat of a strike at Escondida in Chile, the world’s largest red metal mine, copper lost a few cents to close down at US$2.76/lb from US$2.80/lb last week. Oil’s slide resumed as it closed slightly down at US$68.49 a barrel from US$68.69 a barrel a week ago.

Auryn Resources (TSXV:AUG) opened a C$4.63 million offering on a best efforts basis. The deal was expected to close on or about August 2nd.

Arena Minerals (TSXV:AN) opened a C$2 million offering on a best efforts basis. Each unit includes a warrant that expires in three years.

Manitou Gold (TSXV:MTU) opened a C$1.38 million offering on a best efforts basis.  Each unit includes half a warrant that expires in three years.

Declan Resources (TSXV:LAN) closed a C$2.82 million offering on a best efforts basis. Each unit included half a warrant that expires in one year.

IP gradient-array surveys successfully delineated the gold and silver mineralization at Newmont’s Mule Canyon epithermal mine 60km to the north of VIO and so the company anticipates that future sampling, mapping, modelling and interpretation by geologists on the ground will result in identifying highly prospective targets for drilling.

Zinc One Resources (TSXV:Z) announced additional drill results from the Mina Grande Sur zone of its Bongará zinc mine project in Peru.

Mina Grande Sur is one of three known zones of high-grade, near-surface zinc-oxide mineralization along a 1.4km mineralized trend being tested by this drill program. These results confirm and better delineate mineralization at Mina Grande Sur, which gives the company a good base from which to conduct follow-up exploration to potentially expand the mineralization footprint and work towards developing a resource estimate.