ORENINC INDEX down on fewer deals although dollars jumped

ORENINC INDEX down on fewer deals although dollars jumped 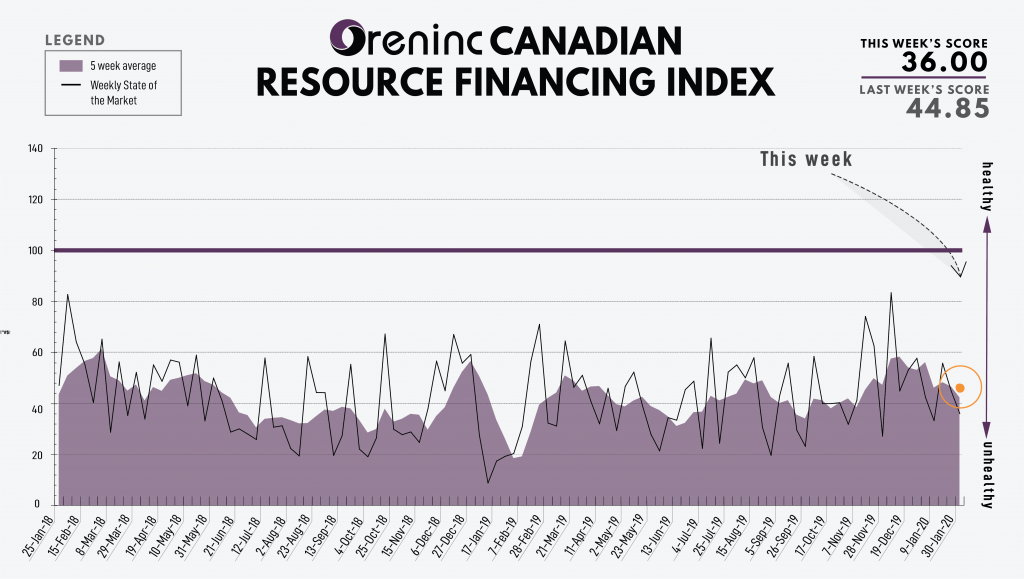 The Oreninc Index fell in the week ending January 31st, 2020 to 36.00 from 44.85 although aggregate dollars increased as fewer deals were announced.

Gold continued its steady climb to higher prices as the coronavirus dominated the news. The virus continued to claim victims with new cases being reported in the Americas, Europe, Middle East, Asia and Africa. Many airlines have grounded flights to and from China while travel advisory warnings have been issued by many world governments. The World Health Organization declared the coronavirus outbreak a global health emergency as the death toll in China passed 200.

While the gold price may be benefitting from the outbreak, the opposite is true for copper, other base metals, and oil, with copper’s price recovery cut-off at the knees and the red metal losing more than 10% in a week.

In the US, impeachment proceedings against President Donald Trump continued, with his defense team essentially arguing that there is no case to answer.

The US Federal Reserve held its first FOMC (Federal Open Market Committee) meeting of 2020 and announced it had no intention of changing current interest rates, keeping them, as expected, between 1.5% and 1.75% despite president Trump hectoring the committee to cut rates on the grounds that it would enable the government to refinance the $22 trillion national debt saving billions in interest payments.

Meanwhile, Labor Department data showed that initial weekly jobless claims fell by 7,000 to a seasonally adjusted 216,000, while the Bureau of Economic Analysis reported that US gross domestic product rose 2.1% during 4Q19 in line with expectations.

In Europe, the 31st of January marked the final day of the UK’s 47-year membership of the European Union. Although little will change initially, as the two entities will remain within a transition period under existing rules and obligations until year-end, during which time they will negotiate the terms of a new relationship.