ORENINC INDEX down as slim pickings for financings 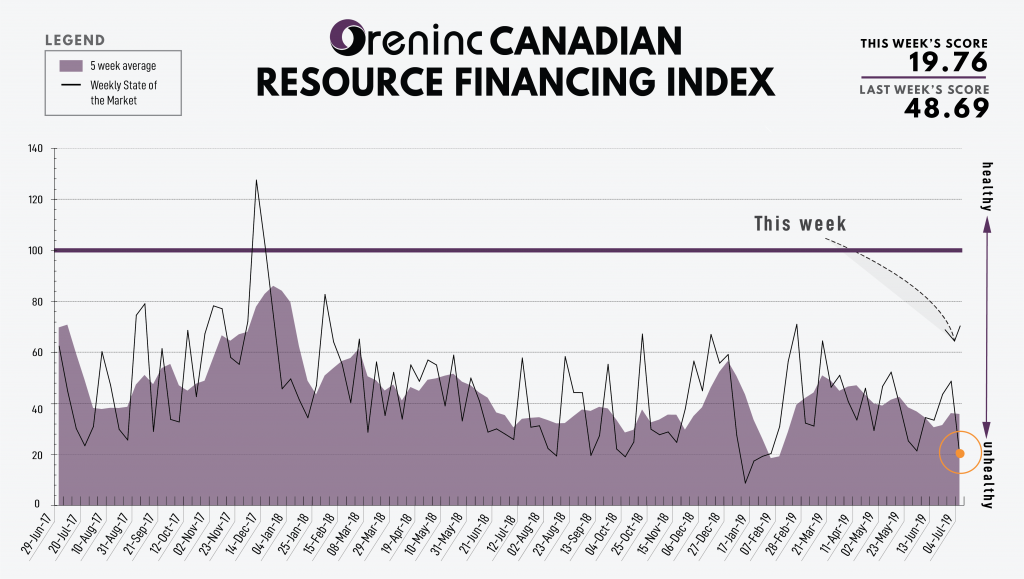 The Oreninc Index was ethereal in the week ending July 5th, 2019 falling to a barely visible 19.76 from 48.69 a week ago as financings seemed to take the week off for the public holidays.

A short week and quiet as Canada celebrated Canada Day, followed a few days later by the USA celebrating Independence Day. Yet, despite the holiday feel the markets were full of action.

Gold had been holding the line above US$1,400/oz but it took a whack on Friday below $1,390/oz after the US Bureau of Labor Statistics said payrolls rose by 224,000 in June, well above the forecast of 160,000 new jobs. The US unemployment rate increased slightly to 3.7% from 3.6% in June. However, the yellow metal steadily recovered through the day back towards $1,400/oz, adding further evidence that a bull market is developing.

Meanwhile, sovereign bond yields continue to be pared back as the yield on 10-year US Treasuries fell to its lowest level in more than two years, at 1.955%. The yield on Germany’s 10-year note is now just above the European Central Bank’s deposit rate at -0.4%.

Turning to trade, while tensions between the US and China over their trade spat were diffused at the recent G20 summit in Japan, nothing has really changed in their bargaining positions, with China still demanding that tariffs implemented by US president Donald Trump be removed before talks advance. President Trump said the US did hold-off imposing tariffs on an another $300 billion of Chinese goods and delay restrictions on Huawei Technologies to let US companies continue selling technology to China’s largest telecommunications equipment company.

The US will also possibly deploy tariffs against the EU as the argument over subsidies for aircraft manufacturers Boeing and Airbus continue. The US has identified $4 billion of EU goods which could be targeted while the EU has drafted a list of retaliatory measures.

Oil continues to surge helped be trade concerns and the fact OPEC looks like it will extend production cuts into the long term as the cartel meets in Vienna, Austria. Production fell for the seventh successive month in June.