ORENINC INDEX down as financings dwindle

ORENINC INDEX down as financings dwindle 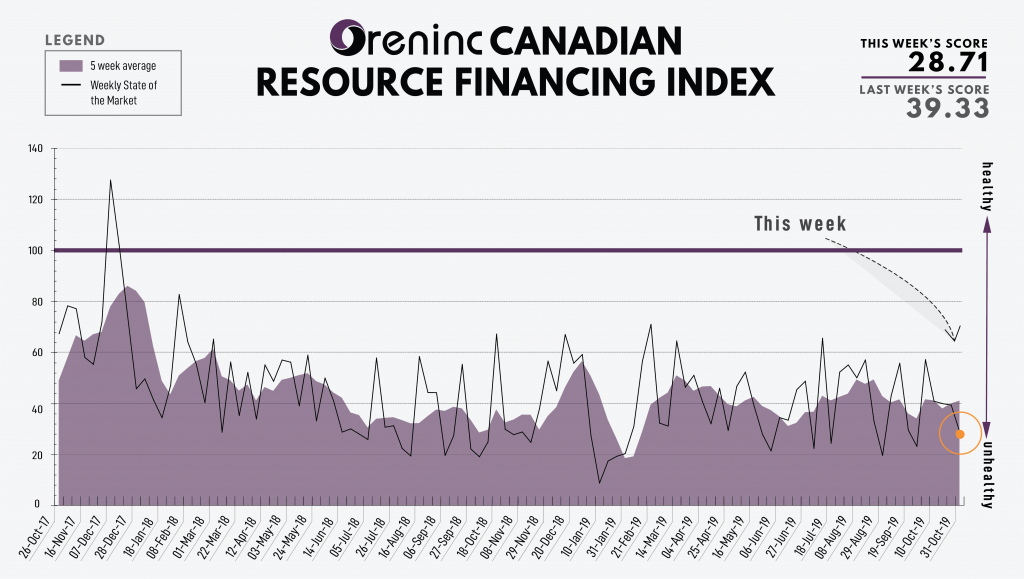 Oreninc participated in the Silver & Gold Summit in San Francisco this past week.

The gold price had a positive week, strengthening slightly above the US$1,500/oz level as the US Federal Reserve Open Market Committee did indeed pare back interest rates by 25 basis points (a quarter of one percent) as was widely expected. The Fed rate spread is now 1.75-2%.

Gold prices threatened to soften as the week closed as the US economy created more jobs than expected in October, with the Bureau of Labor Statistics stating 128,000 jobs were created, above estimated of 90,000, while the unemployment rate held steady at 3.6%. However, gold saw off downward price pressure as news came out of lackluster manufacturing sector sentiment as the Institute for Supply Management said its nonmanufacturing index dropped to 48.3%, missing expectations of around 49%.

China and the US appear to have a long road ahead of them to overcome their trade impasse. China remains concerned about US President Donald Trump’s impulsive nature.

While the precious metals world—including Oreninc—met in San Francisco for the Silver & Gold Summit, the Bay Area was covered by a cloud of smoke as wildfires left many in the state without electricity.

In the UK, the European Union agreed to postpone its leaving date until January 31st, 2020 as prime minister Boris Johnson finally managed to get the nod to hold a general election on December 12th, which will effectively serve as a vote on the deal he negotiated for the nation to leave the European Union. It is by no means a given that Johnson will be returned as prime minister or that he will have a parliamentary majority if he is. One has only to look back to the June 2017 general election called by Johnson’s predecessor Teresa May in the hopes of increasing her majority to provide her with a strong base to get any deal she negotiated through Parliament. Instead, she lost her majority and had to form a coalition government which severely cramped her style.

Protests in Chile against social inequality continued with workers at several of the country’s (and the world’s) joining 24-hour strikes in support of the general protest. President Sebastien Pinera switched out his cabinet and promised widespread reforms to tackle social inequality.