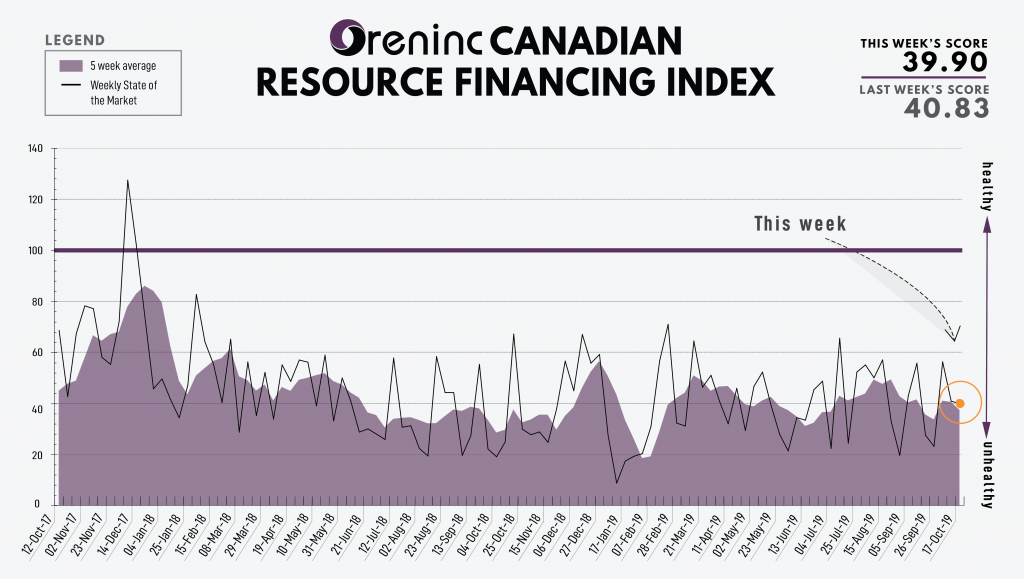 The Oreninc Index fell in the week ending October 18th, 2019 to 39.90 from 40.83 as the aggregate raise amount almost halved during a short week due to Canadian Thanksgiving.

The gold price hovered under the US$1,500/oz level through the week, making half-hearted attempts to move higher before falling back again.

Is there finally an agreement for the UK to leave the European Union? UK prime minister Boris Johnson and European Commission president Jean-Claude Juncker certainly think so. The new deal will see a customs border in the Irish Sea between the mainland UK and Northern Ireland, something Johnson and hardliners from the ruling Conservative party said would never happen as it would be an incision in the UK’s sovereignty (and reclaiming sovereignty was a key issue in the desire to leave the UK, right?). So, Northern Ireland will remain in the EU customs union to allow a free flow of goods with the Republic of Ireland and prevent the return of border posts between the two territories. Goods passing from the mainland UK to Northern Ireland will be subject to checks and duties.

However, the terms have yet to be ratified by the UK Parliament and the EU member states, which in the UK at least is likely to present a challenge given that Johnson lacks a majority. Opposition leader Jeremy Corbyn called the deal worse than the one former prime minister Teresa May failed to win approval for on three occasions and said it should be put to a public referendum. Notably, it lacks the backing of the Democratic Unionist party in Northern Ireland.

Elsewhere, trade talks between the US and China continue along a rocky road with Beijing threatening countermeasures if the US backs pro-democracy demonstrators in Hong Kong. However, with China promising to buy more US agricultural products the US delayed the implementation of 25-30% tariffs on US$250 billion of imports. Duties on $160 billion of other products are due to kick-in on December 15th.

Turkish armed forces continue attacks in northern Syria following the withdrawal of US forces from the region. The US has threatened economic sanctions against Turkey if the attacks continue, which met with the opprobrium of Turkish president Recep Erdoğan. The US stores nukes at an airbase in Turkey, further complicating the situation, and the US withdrawal could also see Russia attempt to increase its influence in the region by acting as peacekeeper.