ORENINC INDEX down as bought deals fall away

ORENINC INDEX down as bought deals fall away 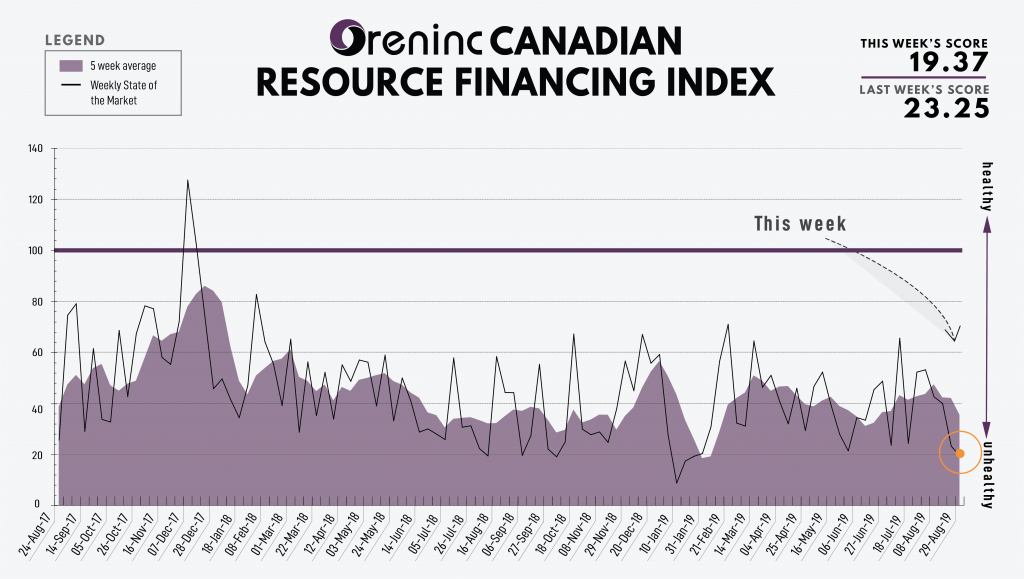 The Oreninc Index more fell in the week ending August 30th, 2019 to 19.37 from 23.25 as bought deals fell away as summer drew to a close with a major hurricane bearing down on the US as the country celebrated Labor Day weekend.

Trade war rhetoric continued to be exchanged between the US and China resulting in upward momentum in the gold price being clipped and a recovery in the DJIA as the US dollar index strengthened. The situation between the two nations remains tense as the US sent a warship through international waters near the Spratly Islands, over which China claims sovereignty.

Ah sovereignty! A very misunderstood word, especially in the UK where prime minister Boris Johnson appears dead set on the nation leaving the European Union at the end of October come hell or high water. It increasingly looks like the only way this can happen is without agreeing a deal, the so-called hard Brexit. To this end he has sought to prorogue the UK parliament—that is, suspend it for five weeks in September and October—to prevent resistance from fellow parliamentarians. With sterling continuing its downward trajectory, the weekend saw protests across the UK against this “coup” by Johnson. The polarisation of the public about whether or not to remain within the EU is now polarising Parliament across party lines on constitutional grounds.

This weekend also marked the 80th anniversary of the start of World War II with many European leaders gathering in Poland, where the first Nazi attack occurred. US president Donald Trump decided not to go, preferring to play gold instead. The many outcomes of the war included the creation of the United Nations and the European Union, both conceived to provide a means for nations to settle their disputes without resorting to the use of force.

Democracy continues to generate mass protests in Hong Kong, with police and protestors again facing off over the weekend.