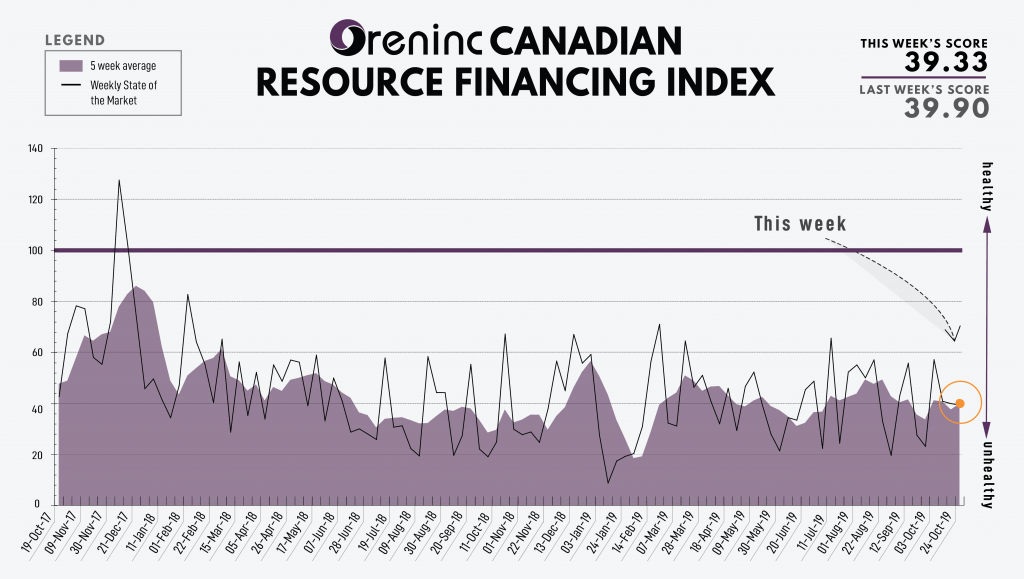 The Oreninc Index fell again in the week ending October 25th, 2019 to 39.33 from 39.90 although the aggregate number of dollars announced almost doubled.

The gold price staged a comeback as the week drew to a close to push its nose back over the US$1,500/oz level. The US Federal Reserve Open Market Committee is due to meet this coming week and is widely expected to continue paring back interest rates.

A relatively quiet week in the US, with the news dominated by the continuing impeachment investigation of President Donald Trump. Congress is expected to commence hearings in the near future.

In the UK, having outlined the basis of a deal for the nation to leave the European Union, PM Boris Johnson now faces the challenging task of getting it endorsed by Parliament and the European Union member states. Having been frustrated in his attempt to get the deal rushed through Parliament. he will seek a general election on December 12th. UK lawmakers have yet to agree to this. With the UK due to leave the EU at the end of October without an exit deal, the bloque appears willing to concede another three-month extension to allow Johnson’s deal to be ratified. However, interference is being run by French premier Emanuel Macron, who only wants to provide an extension until the end of November. More twists and terms to come in the coming weeks.

Protests in Chile against social inequality continued to paralyse the country and impact its all-important copper production throughout the week, culminating in a general protest march Friday in its capital, Santiago in which an estimated one million people participated. Similar marches were held in other cities in the country. President Sebastien Pinera commented that he has heard the voice of the people and that changes will be made.