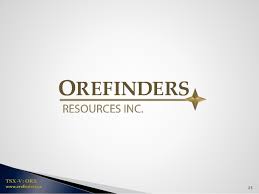 Orefinders Resources Inc. (TSX-V: ORX) is pleased to provide an update to its March 26, 2018 News Release regarding the spin off of Power Ore Inc. which will acquire Orefinders’ past producing silver-cobalt Mann Mines and MacMurchy Nickel properties. Orefinders has finalized the structure for its previously announced spin-out transaction and has entered into a definitive Plan of Arrangement Agreement.

“We are pleased with how this transaction turned out. Our team views Power Ore as a creative way to produce value for shareholders where it otherwise was not being realized. This is a win-win transaction for Orefinders, its shareholders and for Power Ore who will all participate in the upside potential of the cobalt and nickel sectors as a result of the battery metal revolution ahead,” said Stephen Stewart, Orefinders CEO.

Power Ore’s private placement is now fully subscribed, and it has applied to be listed on the TSXV. Closing of the spin-out and private placement remain subject to TSXV, court and shareholder approval. Further information will be included in the information circular and Annual General & Special Meeting materials being mailed to shareholders in the near term.

Orefinders Annual General & Special shareholder meeting, where management will seek shareholder approval for the POA will be held on May 24, 2018 at 10am at the Company’s head office, 2500 – 120 Adelaide Street West in Toronto.

Power Ore is positioning itself to be the owner of a diversified portfolio of battery metal assets in Canada, and is focused on two things:

Power Ore’s first assets will be 100% ownership of the Mann Silver-Cobalt Mine and the MacMurchy nickel property, both of which are in the Cobalt – Gowganda district of Ontario.