OceanaGold Corporation (TSX: OGC) (ASX: OGC)  reports its full year financial and operational results for the year ended December 31, 2020. This follows the release of the preliminary 2020 production and costs dated January 18, 2021. Details of the consolidated financial statements and the Management Discussion and Analysis are available on the Company’s website at www.oceanagold.com.

Additionally, the Company is pleased to provide a multi-year outlook of its business including detailed 2021 guidance. The guidance and outlook exclude any contribution from the Didipio Gold-Copper Mine in the Philippines and the Company would provide a subsequent update to forecasts when the timing of a restart at Didipio is confirmed. The Company will host a webcast to discuss the results and outlook today and these details are provided below.

Michael Holmes, President and CEO of OceanaGold said, “As we close the books on 2020, we look ahead to 2021 and beyond where we expect a very exciting period for the Company and our shareholders. OceanaGold has one of the premier growth pipelines in the industry. This includes bringing three new underground mines into production over the next three years with Martha Underground already producing, Golden Point Underground at Macraes where first production is expected in the fourth quarter of this year, and the Haile Underground where development is expected to commence in the second half of this year. These three projects alone are expected to deliver more than an 75% increase in production relative to 2020 at decreasing costs and increasing margins.”

“Additionally, we are very excited with our exploration results at WKP as we continue to advance this world-class prospect. Based on the comprehensive plans we provided to the market last year, first production from WKP is targeted for 2026. However, in response to COVID-19 economic recovery plans, in conjunction with stakeholders we are investigating opportunities bring forward high-grade production into our five-year plan in a responsible and sustainable manner. The significant growth projects in New Zealand are expected to deliver substantial socio-economic benefits including an additional 300 new jobs for local rural communities.”

“Finally, at Didipio, we continue to work with the National Government on the renewal of the Didipio FTAA. After strong positive engagement with the Philippine Departments of Finance and Environment and Natural Resources in December, the renewal is pending re-endorsement by those Departments to the Office of the President for approval. We are committed to returning thousands of Filipinos, the majority of whom reside in the rural communities in the provinces of Nueva Vizcaya and Quirino, back to work to operate one of the most responsible mining operations globally. Didipio stands poised to provide much needed economic benefits to the local communities that are recovering from the social and economic impacts of COVID-19 and OceanaGold is committed to supporting that recovery.”

Fourth quarter revenue increased nearly 72% quarter-on-quarter, reflecting higher gold sales from Haile and Macraes and the resumption of production at Waihi. For the full year 2020, the Company generated $500 million in revenue including $168 million in the fourth quarter. Revenue decreased year-over-year primarily due to limited sales from Didipio and lower annual production from Waihi as development of Martha Underground progressed, both partially offset by a higher average gold price received.

Fourth quarter operating cash flows of $(1.6) million were lower quarter-on-quarter due to the unwinding of the gold prepay arrangement from earlier in the year and New Zealand income tax paid of $18 million in relation to the 2018 tax year. Annual operating cash flows of $199 million were a modest decrease year-over-year and attributable to reduced cash flows from Didipio and Waihi, partly offset by the $77 million received from the gold pre-payment arrangement.

Cash flows used in investing activities for the full year of $226 million decreased over the prior year primarily due to lower capital spend at Didipio and the sale of non-core equity investments.

For the full year 2020 and fourth quarter, cash from financing activities of $160 million and $117 million, respectively, reflects the $50 million debt drawdown under the revolving credit facility in the first quarter and proceeds of $122 million from the issuance of shares in the fourth quarter.

The Company will continue to invest in high-margin production growth including the development of new underground mines at Martha (Waihi), Golden Point (Macraes) and Haile while continuing to invest in the high-yielding near-mine exploration program underway.

Haile is expected to produce between 150,000 and 170,000 ounces of gold at cash costs of $750 to $850 per ounce sold and site AISC between $950 to $1,100 per ounce sold in 2021. This expanded range reflects ongoing risks related to continued uncertainty of the impact of COVID-19 in the United States and the well-above average rainfall experienced over the last few years, both of which had material adverse impacts on operations in 2020 when the operation experienced 60 lost mining days.

Haile’s 2021 production and cost ranges are based on operational plan that includes mining of 35 million to 40 million tonnes of material including 3.5 million to 4 million tonnes of ore. Approximately 60% of Haile’s 2021 production is expected in the first half of the year at correspondingly lower AISC due to mine sequencing on higher grades mined and processed. Ledbetter Phase 1 and Snake Phase 2 open pits will be the primary ore sources in the first half with concurrent pre-stripping at the Haile open pit which becomes the primary ore mining source in the second half. The 2021 mine plan is expected to increase mining faces from three at the end of 2020 to five by the second half of the year, which should allow for increased operating flexibility. The Company expects to mill between 3.6 and 3.8 million tonnes of ore in 2021 with an average head grade between 1.60 g/t and 1.70 g/t and average recoveries of 82 – 83%.

Haile’s 2021 capital program will focus on delivery of critical tailing storage facilities (“TSF”), water treatment and PAG waste cell infrastructure, while progressing development of the Horseshoe Underground Mine (“HUG”). The Company expects to invest $115 to $125 million in growth projects, approximately two-thirds of which relates to those infrastructure projects with the balance for HUG, where development is expected to begin in the second half of the year pending receipt of mining permits. Sustaining capital investments of $35 to $45 million will include pre-stripping at the Haile and Mill Zone open pits, as well as TSF lifts that support current operations.

Portal development for Golden Point Underground (“GPUG”), pre-stripping of the Deepdell open pit and expansion of the Fraser’s open pits including Frasers West and Gay Tan pits all commenced at the end of the fourth quarter 2020. These projects are expected to extend the mine life at Macraes to 2028 with forecast production of 1.1 million ounces over the period. GPUG is expected to commence production in the fourth quarter of 2021 supplementing, and eventually replacing, underground production from Frasers Underground which is expected to conclude in the second half of 2022.

Macraes’ 2021 capital program is focussed on progressing the mine life extension projects mentioned above. The Company expects to invest $10 to $15 million in growth capital primarily attributable to GPUG portal development. Sustaining capital investments of between $35 and $45 million are approximately equally divided between pre-stripping at Deepdell and Frasers open pits and infrastructure-related spend to support the mine life extension projects, including TSF lifts and definition drilling.

Waihi is expected to produce between 35,000 and 45,000 ounces with cash costs ranging from $1,000 to $1,100 per ounce sold and site AISC ranging from $1,350 to $1,450 per ounce sold. The 2021 production profile is second-half weighted with continuous stope production from Martha Underground commencing late in the second quarter, and the higher 2021 AISC reflects the associated ramp-up of the mine.

Development of MUG progressed 7,371 metres in 2020 and the Company expects continued development and ramp-up of operations over the next few years. First gold production from Martha Underground occurred at the end of 2020 with additional production in the first quarter of 2021 expected ahead of a mill shutdown to install a new SAG mill shell. Mining of Martha Underground will continue and ramp-up with ore stockpiled ahead of continuous milling starting late in the second quarter.

Waihi’s 2021 capital program reflects remaining investment on MUG development and associated infrastructure as well as the SAG mill upgrade. The Company expects to invest $40 to $50 million in growth capital attributable to MUG underground development. Sustaining capital investments of between $10 and $15 million reflect a portion of MUG development costs, resource conversion drilling and other minor projects.

Didipio is excluded from 2021 guidance, and holding costs are expected to be in the order of $1.5 million per month as the renewal process of the FTAA continues. Achieving steady state production at Didipio will be dependent on the timing of the FTAA renewal and workforce recruitment efforts. The Company will provide updated guidance when the timing of a restart at Didipio has been confirmed.

In December 2020, the Company had multiple meetings with national government officials on the FTAA renewal proposal. The Company remains hopeful that the renewal proposal will be re-endorsed and forwarded to the Office of the President for final approval. The Company will continue to engage with government officials and will work with stakeholders to ensure a safe restart of operations at Didipio. Detailed planning and consultation is underway for recommencement of operations subject to final approval of the FTAA renewal from the OP. The timeline for renewal remains uncertain and achieving steady state production will be dependent on the timing of the renewal and workforce recruitment efforts.

Exploration in 2021 is focussed on supporting existing operations while progressing near-mine organic growth projects. The bulk of exploration investment is allocated to the Waihi district including WKP and MUG where the Company plans to drill approximately 10,000 metres and 27,000 metres, respectively, at a total investment of $15 to $20 million. The Company expects to provide an updated resource estimate for WKP in the second half of the year that incorporates results from both the 2020 and 2021 drill programs. Beyond Waihi, the balance of exploration investment is allocated to continued infill and extensional drilling at GPUG, future underground opportunities near GPUG, open pit expansions at Macraes and underground growth opportunities at Haile.

Over a five-year period ended December 31, 2025, the Company expects to produce an annual average of approximately 450,000 gold ounces with AISC averaging $1,050 per ounce sold with the commissioning of three new underground mines (MUG, GPUG and HUG) and expansion of the open pit operations at Haile and Macraes.

OceanaGold is a multinational gold producer committed to the highest standards of technical, environmental, and social performance. For 30 years, we have been contributing to excellence in our industry by delivering sustainable environmental and social outcomes for our communities, and strong returns for our shareholders. Our global exploration, development, and operating experience has created an industry-leading pipeline of organic growth opportunities and a portfolio of established operating assets including Didipio Mine in the Philippines; Macraes and Waihi operations in New Zealand; and Haile Gold Mine in the United States of America. 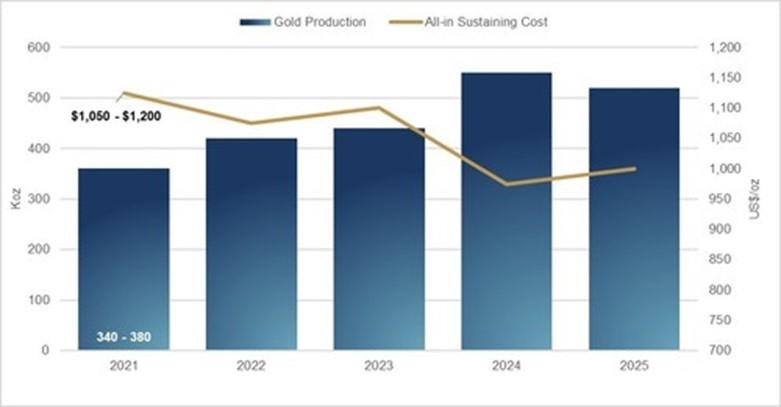