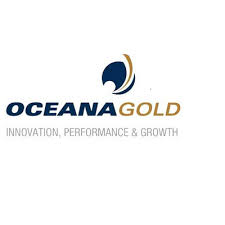 OceanaGold Corporation (TSX: OGC) (ASX: OGC) is pleased to announce the intersection of further high-grade gold mineralisation along the East Graben vein at the Company’s WKP prospect in New Zealand. These results stem from the latest round of drilling and form part of a more extensive ongoing exploration program that includes surface mapping and ground geophysics.

Mick Wilkes, President and CEO of OceanaGold said, “The latest drill results support the significance of this exciting exploration program targeting high grade ore mined from underground, and its potential to contribute to a further extension of mine life at our Waihi operation. These drill results, albeit early in the discovery process, are on par with underground targets being reported from drilling at our Martha Project; a world class multi-million ounce high grade gold deposit.”

The Company commenced exploration of the WKP prospect in August 2017 with 1 – 2 diamond rigs drilling 8,005 metres in 17 holes to date. Since the November 2017 exploration update, 6,803 metres have been drilled at WKP focussing on the potential of the East Graben Vein; one of three major low sulphidation epithermal gold-silver veins. This drilling has returned a best true width intercept of 8.7 m @ 24.54 g/t Au within a broader zone of 51.3 m @ 7.18 g/t Au. This hole is an approximate 120-metre step-out hole north and along strike from an intercept of 7.6 m @ 10.84 g/t Au previously reported on the East Graben Vein. Drilling has now delineated approximately 750 metres of strike length open in both directions and over 200 metres vertical extent that is open for 100 – 200 metres up-dip.

Two other significant veins, West and T Stream (Figure 1), have also been drill tested with encouraging widths and grades of gold mineralisation intersected in several holes. On the West vein, three holes for a total of 1,299 metres were drilled with a best true width intercept of 9.8 m @ 4.53 g/t Au and 4.2 g/t Ag (West: WKP48B). This result supports historical downhole intercepts of 14.0 m @ 9.13 g/t Au and 10.2 m @ 5.92 g/t Au (West: WKP29). At T Stream, three holes were drilled for a total of 1,721 metres with best downhole intercept of 3.1 m @ 5.23 g/t Au which go along with historic true width intercepts that included 7.5 m @ 17.22 g/t Au (T Stream: WKP31) and 6.5m @ 6.59 g/t Au (T Stream: WKP24). The latest drilling at T Stream suggest the recent holes intersected deeper levels of the vein and either below the optimal zone of mineralisation or outside of the mineralised shoot. Further drilling is required to test strike and dip potential.

Over the remainder of 2018, 7,800 metres of diamond drilling is scheduled to follow up on the excellent results to date.

OceanaGold Corporation is a mid-tier, high-margin, multinational gold producer with assets located in the Philippines, New Zealand and the United States. The Company’s assets encompass the Didipio Gold-Copper Mine located on the island of Luzon in the Philippines. On the North Island of New Zealand, the Company operates the high-grade Waihi Gold Mine while on the South Island of New Zealand, the Company operates the largest gold mine in the country at the Macraes Goldfield which is made up of a series of open pit mines and the Frasers underground mine. In the United States, the Company operates the Haile Gold Mine, a top-tier, long-life, high-margin asset located in South Carolina. OceanaGold also has a significant pipeline of organic growth and exploration opportunities in the Americas and Asia-Pacific regions.

OceanaGold has operated sustainably over the past 27 years with a proven track-record for environmental management and community and social engagement. The Company has a strong social license to operate and works collaboratively with its valued stakeholders to identify and invest in social programs that are designed to build capacity and not dependency.