O3 Mining Inc. (TSX-V: OIII) (OTCQX: OIIIF)  is pleased to provide new drilling results from the Marban project on its Malartic Property in the Val-d’Or region of Québec, Canada as part of its 250,000 metre drilling program.

Drilling at Marban focuses on expanding mineralization outside of the proposed pit areas outlined in the Preliminary Economic Assessment released on September 08, 2020. The 2021-2022 drilling program consists of 125,000 metres to test extensions of the deposits and zones outside the PEA pit areas. New drilling results from two drill holes include:

“The discovery of the new Triple North zone outside of the Norlartic pit shell continues to build our confidence in the potential to expand the mineable resources at Marban. With 125,000 metres of drilling planned for the Marban project, our drill program continues to grow, as does the potential for new discovery,” said President and CEO José Vizquerra.

The intercepts released today in holes O3MA-21-033, O3MA-21-033-W1 and O3MA-21-039 are part of six drill holes completed earlier this year to test extensions at depth of the North North and North Shear zones, which are both proposed for open pit mining in the 2020 Marban PEA.  Assay results from four other drill holes in this area are pending.

A total of 51 drill holes have been drilled at Marban since the beginning of the campaign in August 2020, focusing on the Kierens, Kierens NW, Gold Hawk, Orion, MK, North Shear, North North, and Marban NE zones. Assay results from 23 drill holes are pending.

The North Shear zone was intersected in hole O3MA-21-033-W1 and confirmed the depth continuity of the mineralized zone. The mineralized interval has been intercepted 200 metres below the last historical intercept of the North Shear zone, and returned 5.1 g/t Au over 5.1 metres, including 13.1 g/t Au over 0.5 metres and 15.2 g/t Au over 0.7 metres, expanding the potential of the zone further at depth. The mineralization is hosted within a quartz-carbonate vein with visible gold and disseminated pyrite at the sheared contact between mafic volcanics and a felsic dyke.

Hole O3MA-21-039 intersected the  North North zone at a vertical depth of approximately 200 metres and cross-cut an albitized granodiorite. Mineralization consists of quartz-carbonate-tourmaline veins with up to 2% disseminated pyrite. The intercept returned 5.3 g/t Au over 1.9 metres. 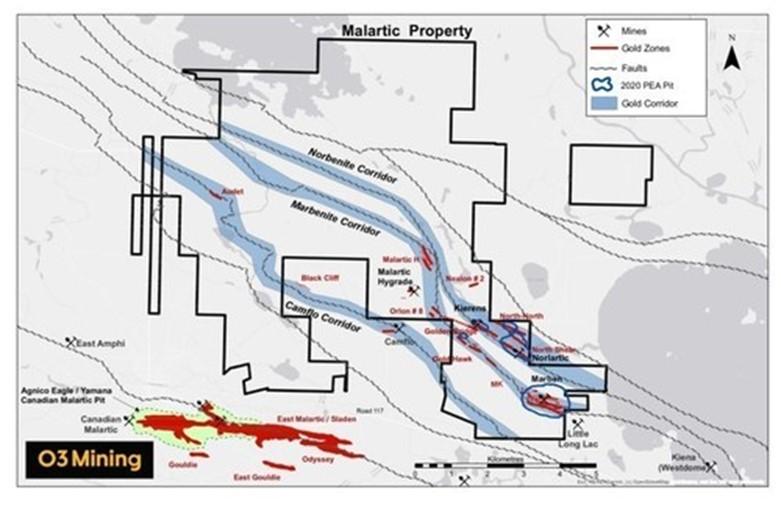 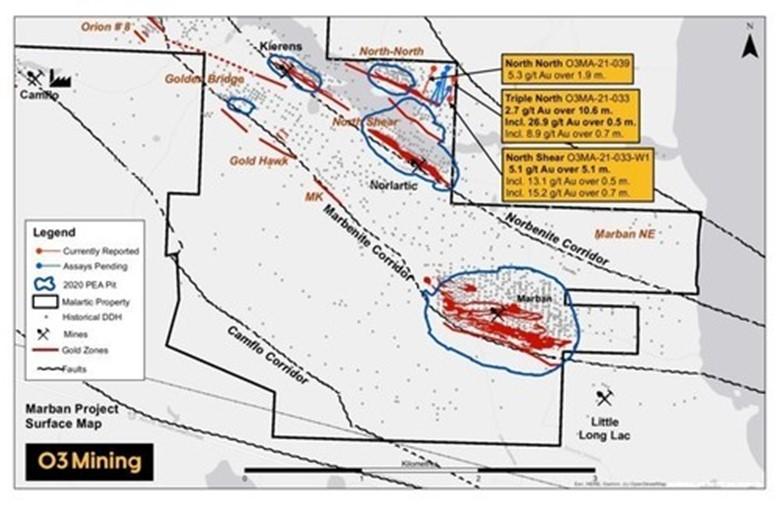