O3 Mining Intersects 2.9 g/t Au Over 14.2 Metres Near Surface and 145 metres Outside of Pit Shell at Marban Project

O3 Mining Intersects 2.9 g/t Au Over 14.2 Metres Near Surface and 145 metres Outside of Pit Shell at Marban Project

Current drilling on the Malartic property is focused on expanding mineralization outside of the proposed pit areas outlined in the Preliminary Economic Assessment (PEA) released on September 8th, 2020. The 2020-2021 drilling program considers 45,000 metres on the Malartic property to test extensions of the deposits and zones outside of the PEA pit areas. New analytical results from four drill holes cutting the Kierens deposit extensions at 25 meters below surface include:

These drill holes have been drilled from the same collar located between the Kierens and Norlartic deposits, 145 meters SE of the Kierens pit shell limit and 325 meters from the NW limit of the Norlartic pit shell. The primary objective of these holes was to cross the Kierens-Norlartic corridor at shallow depth while drilling the extensions at depth of the Gold Hawk zone. These new results suggest that the Kierens ore body comes closer to the surface than previously interpreted and, when properly delineated, could favorably impact a future update of the in-pit resource.

“We are pleased with these latest drill results as they show that drilling can continue to expand the mineral footprint at the various deposits on our Malartic property, which bodes well for growing the resource base and making the Marban project development even more attractive. We also received the pleasant surprise of intercepting mineralization just below the surface, which could have a meaningful positive impact in a future production scenario,” said President and CEO José Vizquerra.

NOTE: True width determination is currently unknown but is estimated at 65-80% of the reported core length interval for the zones.

The high-grade gold veins at Gold Hawk have been outlined by many different drilling programs since the 1980s. Drilling at 30-metre spacing and to a vertical depth of 400 metres identified three veins or vein systems named Vein #1, #2, and #3, remains open at depth. Non 43-101 compliant resource suggests 254,000t grading 8.6g/t Au at Gold Hawk (Sigeom).

Drill holes O3MA-20-003 to O3MA-20-006 all intersected the Kierens-Norlartic mineralized zone at shallow depth at approximately 6 metres apart. The mineralized zone is associated with up to 5% disseminated pyrite within a brecciated gabbroic dyke with 15% quartz-carbonate-chlorite veining. The dyke is located at the contact with a sheared ultramafic unit and corresponds to the geological context described by previous operators of the Kierens horizon. 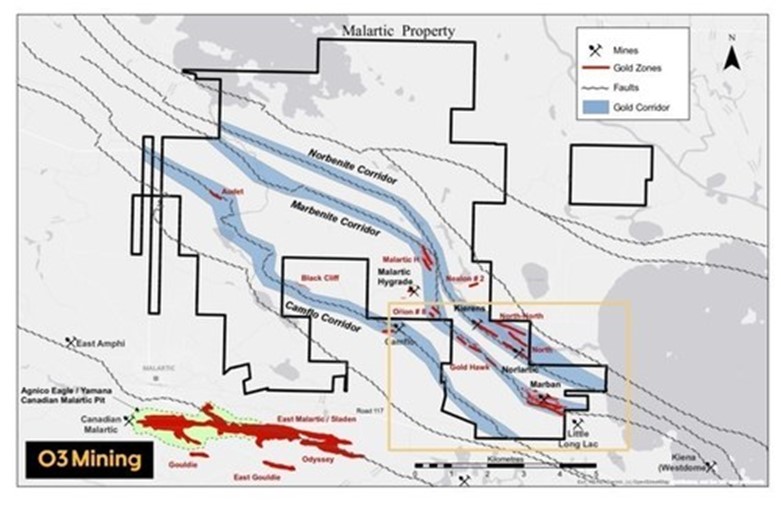 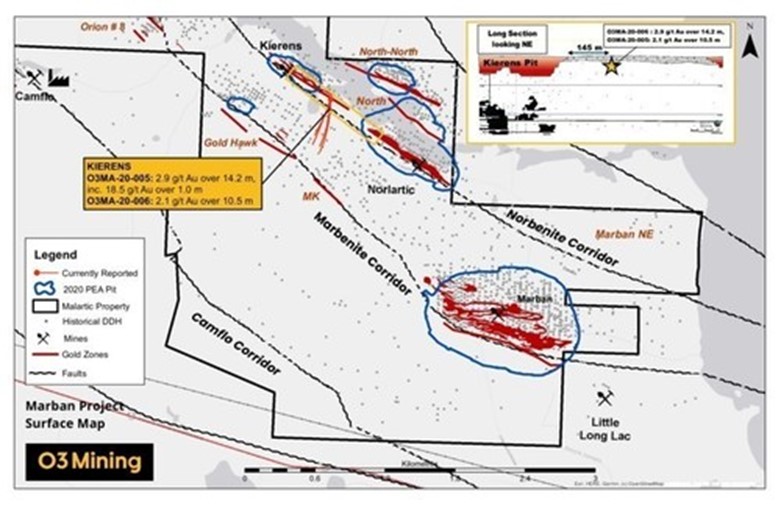 The scientific and technical content of this news release has been reviewed, prepared, and approved by Mr. Louis Gariepy. (OIQ #107538), VP Exploration, who is a “qualified person” as defined by National Instrument 43-101 – Standards of Disclosure for Mineral Projects

True width determination is currently unknown but is estimated at 65-80% of the reported core length interval for the zones. Assays are uncut except where indicated. Intercepts occur within geological confines of major zones but have not been correlated to individual vein domains at this time. Half-core samples are shipped to Agat laboratory in Val D’Or, Quebec and Mississauga, Ontario for assaying. The core is crushed to 75% passing -2 mm (10 mesh), a 250 g split of this material is pulverized to 85% passing 75 microns (200 mesh) and 50 g is analyzed by Fire Assay (FA) with an Atomic Absorption Spectrometry (AAS) finish. Samples assaying >10.0 g/t Au are re-analyzed with a gravimetric finish using a 50 g charge. Commercial certified standard material and blanks are systematically inserted by O3 Mining’s geologists into the sample chain after every 18 core samples as part of the QA/QC program. Third-party assays are submitted to other designated laboratories for 5% of all samples. Drill program design, Quality Assurance/Quality Control (“QA/QC”) and interpretation of results are performed by qualified persons employing a QA/QC program consistent with NI 43-101 and industry best practices.

O3 Mining, which forms part of the Osisko Group of companies, is a mine development and emerging consolidator of exploration properties in prospective gold camps in Canada – focused on projects in Québec and Ontario – with a goal of becoming a multi-million ounce, high-growth company.

O3 Mining is well-capitalized and holds a 100% interest in properties in Québec (435,000 hectares) and Ontario (25,000 hectares). O3 Mining controls 61,000 hectares in Val D’Or and over 50 kilometres of strike length of the Cadillac-Larder Lake Faut. O3 Mining also has a portfolio of assets in the James Bay and Chibougamau regions of Québec.