O3 Mining Inc. (TSX-V: OIII) (OTCQX: OIIIF) is pleased to provide an update on its well-funded 40,000 metre drilling program on its Marban Project in Val-d’Or, Quebec, Canada, which seeks to convert, expand, and discover new gold resources. The Corporation is reporting results from seven holes drilled on brownfield targets at Marban Engineering as well as providing an update on the summer exploration plan and ongoing activities at Marban Regional.

A 40,000 metre brownfield exploration program has been underway at Marban Engineering with four drill rigs targeting areas outside of the resource pits from the updated Mineral Resource Estimate (See Press Release March 1, 2022) in order to expand the mineralization along strike and increase resources. Part of the expansion drilling program targets the Norlartic Extension area, located north of the Marban deposit and south-east of the Norlartic deposit. The area contains at least four stacked zones where three of which correspond to the geological continuation of the Norlartic zone and form a 300 metre wide corridor that could extend for 1.8 kilometres. The ongoing campaign aims to systematically drill the entire strike length of the corridor to define new near-surface economic mineralization. To date, 16 drill holes have successfully intersected the Norlartic Extension mineralization covering a strike length of 650 metres, exceeding the 2022 resource pit shells, showing positive continuity.

O3 Mining’s President and Chief Executive Officer, Mr. Jose Vizquerra commented, “Our 2022 Brownfield exploration program at Marban Engineering continues to highlight the potential to increase the near-surface resources, especially following the release of our recently updated Mineral Resource Estimate. Not only do the results published today confirm the high potential to expand the current pits but also to grow the future production scenario, improve the project economics and extend the mine life of the project.”

Mr. Jose Vizquerra, also commented, “We are very excited to have initiated exploration work in the Marban Regional area of the Marban Project. This underexplored, large land package offers significant exploration potential upside, with several historic showings, promise for a new discovery, and room to further grow the mineral resource.” 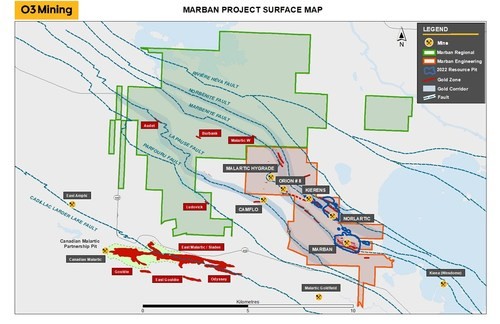 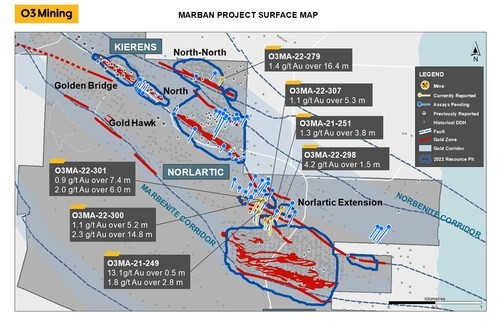 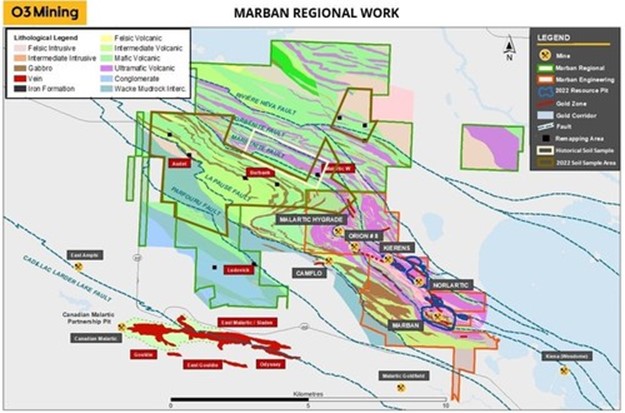 The scientific and technical content of this news release has been reviewed, prepared, and approved by Mr. Sébastien Vigneau. (OGQ #993), Principal Geologist, who is a “qualified person” as defined by National Instrument 43-101 – Standards of Disclosure for Mineral Projects (“NI 43-101”).

O3 Mining Inc., an Osisko Group company, is a gold explorer and mine developer on the road to produce from its highly prospective gold camps in Québec, Canada. O3 Mining benefits from the support, previous mine-building success, and expertise of the Osisko team as it grows towards being a gold producer with several multi-million-ounce deposits in Québec.

O3 Mining is well-capitalized and owns a 100% interest in all its properties (66,000 hectares) in Québec. O3 Mining trades on the TSX Venture Exchange and OTC Markets. The Corporation is focused on delivering superior returns to its shareholders and long-term benefits to its stakeholders.