O3 Mining Inc. (TSX-V: OIII) (OTCQX: OIIIF) is pleased to provide drilling results from the Simkar sector on its Alpha property in Val-d’Or, Québec, Canada as part of a well-funded 150,000 metre drilling program.

New drilling results from six holes drilled in the Simkar sector in late 2020 include:

A 3D-model of the Alpha property is available on the Company’s website at https://o3mining.com/presentations/drill-results.

The Simkar sector comprises several East-West trending iron-rich gabbros and basalts covering an area of 5 kilometres by 2 kilometres. The main dyke hosts the former Simkar mine. The drill holes reported today aimed to test the extensions of multiple zones known from historical surface exploration work and shallow drill holes extending over an area of roughly 1.2 square kilometres,  located approximately 700 metres south of the historical Simkar mine. O3 Mining’s 2020 trenching program helped improve the geological understanding of the controls of these zones in preparation for drilling this winter. The encouraging results received from this initial drilling program support a decision to continue drilling to further explore for mineralized extensions of the VD-L17 zone, which remains partially open laterally and fully open at depth.

“Drilling at Simkar is successfully intercepting gold mineralization at relatively shallow depths and advancing the possibility of developing another potential ore body with good grade and width. The success of these holes further validates the multi-exploration technique approach we are taking to developing drill targets, which bodes well for future success of finding extensions to these zones as our drilling program continues,” said President and CEO Jose Vizquerra.

O3 Mining’s 2020-2021 drilling program includes 100,000 metres for the Alpha property, which hosts multiple mineralized systems over an approximate 20 kilometres strike length. The program is focused on expanding known deposits at depth at the Bulldog-Orenada, Simkar, and Akasaba sectors, as well as follow-up on the significant previous drill, intercepts to prove the continuity of grades and widths to define new deposits and to make new discoveries in the vicinity of those deposits or in the Omega sector. These targets were generated in 2020 from a combination of in-house geological compilation data, a summer trenching program, and the use of Artificial intelligence (“AI”) targeting study by Mira Geoscience (See Press Release December 02nd, 2020).

Table 1 includes additional intercepts of interest from the VD zones. A further interpretation is required to understand their significance and decide on potential follow-up drilling. A total of seven drill holes totalling 3,282 metres have been drilled in 2020 in this part of the Simkar sector. Assay results from three drill holes are pending. Now that winter conditions allow access to wetlands the drilling focus has shifted to other areas of the Alpha property. Follow-up drilling on the intercepts reported here will occur during the summer months.

Hole O3AL-20-326 intersected VD-L17 at approximately 150 metres below channels O3AL-D20-01-015 that returned 9.0 g/t Au over 1.3 metres and O3AL-D20-01-008 cut 7.8 g/t Au over 0.7 metres  (See Press Release August 27th, 2020). Historical shallow drill holes 50 metres underneath the trench returned 1.5 g/t Au over 13.7 metres and 3.4 g/t Au over 4.6 metres. The intercept in hole O3AL-20-326 expanded the VD-L17 zone a further 100 metres vertically. The zone corresponds to a shear zone affecting an iron-rich gabbroic dyke and the surrounding mafic volcanic rocks. The first interval extends from the upper contact to the middle of the dyke and yielded 1.2 g/t Au over 28.2 metres, including three higher-grade intervals. The upper-contact returned 2.0 g/t Au and 4.2 g/t Ag over 5.1 metres where the mafic brecciated volcanic rocks are strongly sheared. Mineralization consists of up to 2% sphalerite stringers, contrary to the gabbro where mineralization consists of the percolation of pyrrhotite and chalcopyrite. The gabbro is further cross-cut by a tourmaline-rich fault-fill vein yielding 8.0 g/t Au and 4.8 g/t Ag over 0.5 metres. Mineralization near the middle of the gabbro consists of fracture filling pyrrhotite, chalcopyrite, and calcite,  yielding 4.4 g/t Au over 2.7 metres. The lower contact with the mafic volcanic rocks returned an interval of 2.2 g/t Au over 5.1 metres. This contact is also strongly sheared and contains up to 5% quartz veinlets locally containing visible gold and returning 17.8 g/t Au over 0.5 m. 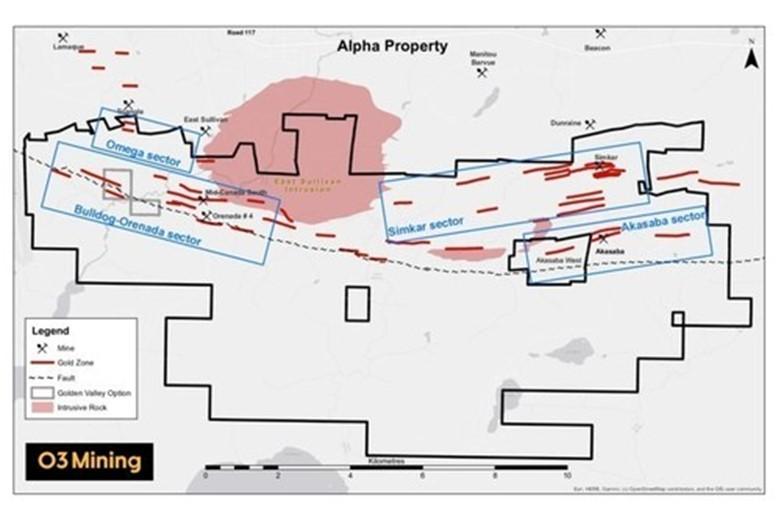 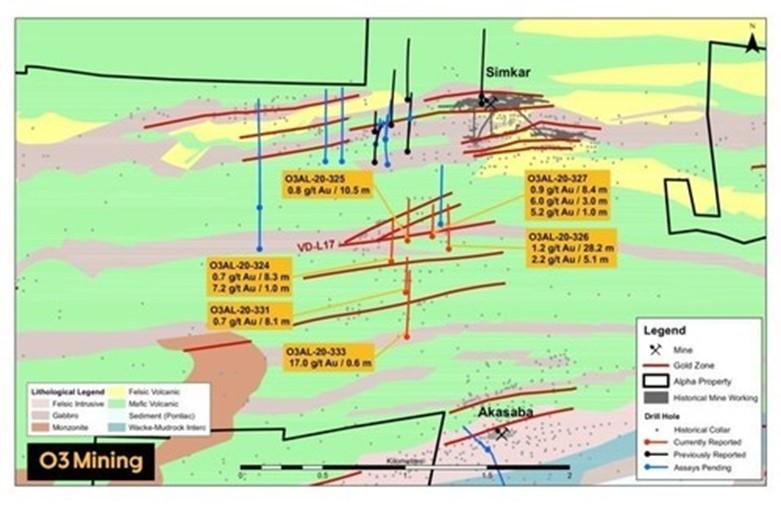 True width determination is currently unknown but is estimated at 65-80% of the reported core length interval for the zones. Assays are uncut except where indicated. Intercepts occur within geological confines of major zones but have not been correlated to individual vein domains at this time. Half-core samples are shipped to Agat laboratory in Val-d’Or, Québec and Mississauga, Ontario for assaying. The core is crushed to 75% passing -2 mm (10 mesh), a 250 g split of this material is pulverized to 85% passing 75 microns (200 mesh) and 50 g is analyzed by Fire Assay (FA) with an Atomic Absorption Spectrometry (AAS) finish. Samples assaying >10.0 g/t Au are re-analyzed with a gravimetric finish using a 50 g charge. Commercial certified standard material and blanks are systematically inserted by O3 Mining’s geologists into the sample chain after every 18 core samples as part of the QA/QC program. Third-party assays are submitted to other designated laboratories for 5% of all samples. Drill program design, Quality Assurance/Quality Control (“QA/QC”) and interpretation of results are performed by qualified persons employing a QA/QC program consistent with NI 43-101 and industry best practices. 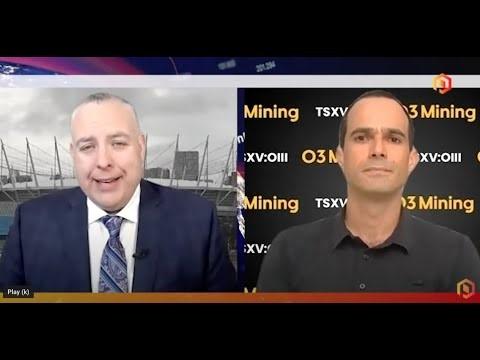