O3 Mining Inc. (TSXV: OIII) (OTCQX: OIIIF) is pleased to provide new drilling results from the Marban project on its Malartic Property in Val-d’Or, Québec, as part of its well-funded 150,000 metre drilling program.

Current drilling on the Marban project focuses on expanding mineralization outside of the proposed pit areas outlined in the Preliminary Economic Assessment released on September 08, 2020. The 2020-2021 drilling program consists of 50,000 metres to test extensions of the deposits and zones outside of the PEA pit areas. New drilling results from seven drill holes include:

A 3D-model of the Malartic property and the Marban project is available on the Company’s website at https://o3mining.com/presentations/drill-results.

“Late last year, we published a positive PEA on Marban and committed to making it even better through continued exploration. By investing the time and money into our drill program we continue to grow the various Marban deposits and the results will be included with the next resource update, which will underline how the development of Marban is becoming an even more attractive possibility. Drilling has successfully intercepted mineralization in new areas including what we think is a new parallel structure to Marban called Golden Bridge, which after more work, could be brought into the project economics and further add to the benefits of a future production scenario,” said President and CEO José Vizquerra.

The new Golden Bridge zone discovery is defined by three drill holes covering an area of 175 metres by 100 metres at 175 metres vertical depth and remains open to the west, at depth, and up to the surface. O3 Mining believes that the near surface Golden Bridge zone offers the potential to generate a new open pit resource, just 200 metres from the PEA Norlartic pit. Initial interpretation suggests that the Golden Bridge zones are associated with an east-west trending splay of the Marbenite and Norbenite shears. If proven, this would offer a lateral exploration potential of an additional 650 metres along the Golden Bridge structure. The two intercepts associated with albitized dykes in O3MA-20-013 are 65 meters apart in the hole and are located at a vertical depth of 450 metres on average. The zones remain open laterally and at depth.

The primary objective of these holes was to cross the Kierens-Norlatic corridor at shallow depth while drilling extensions at depth of the Gold Hawk zone. These new results suggest that the Kierens and Norlartic ore bodies come closer to the surface than previously interpreted and, could potentially connect when properly delineated. Additionally, the discovery of the Golden Bridge zone shows the potential to expand resources associated with splay structures connecting the Norbenite and Marbenite shears. A total of 38 drill holes totalling 20,591 meters have been drilled since the beginning of the campaign in August 2020 at the Marban Project, focusing on the Kierens, Kierens NW, Gold Hawk, Orion, MK, North Shear, North North, and Marban NE zones. Assay results from 27 drill holes are pending.  Now that the winter conditions allow accessing humid lands, the focus will shift over to the Marbenite Deep, Marban East Deep (both adjacent to Marban pit) as well as at North North and North Shear. Follow-up drilling on the intercepts released today will occur during the summer months as the Company prioritizes areas only accessible during winter.

NOTE: True width determination is currently unknown but is estimated at 65-80% of the reported core length interval for the zones.

The Kierens zone has been intersected at shallow depth in four drill holes. Holes O3MA-20-011 and O3MA-20-013 hit the Kierens zone in the middle of the proposed Kierens pit and confirmed the continuity of the mineralization. Hole O3MA-20-028 is located 175 m SE of the Kierens proposed pit limit and returned 1.5 g/t Au over 6.5 m expanding the open-pit potential further east. The three holes intersected quartz-calcite stockwork associated with up to 5% disseminated pyrite in a basaltic unit crosscut by gabbroic dykes. The Kierens zone is within the hanging wall of the Norbenite shear located at the contact with the ultramafic rocks. Hole O3MA-20-018 intersected the Kierens zone at the western extremity of the proposed pit. It intersected a stockwork of quartz-calcite veins related to gabbroic dykes hosted in sheared komatiite that returned 9.4 g/t Au over 1.0 m.

The Marbenite shear is separated from the Norbenite shear by a 150 m thick tabular granodiorite intrusion. During the fall, O3MA-20-001 intersected stockwork quartz calcite veins in a weakly sericitized and pyritized portion of the granodiorite that yielded 4.4 g/t Au over 1.5 m (see press release November 24, 2020). Holes O3MA-20-012 and O3MA-20-015 show that the previously observed stockwork forms a continuous structure within the granodiorite now recognized as the Golden Bridge zone. Both holes intersected a stockwork consisting of 15% quartz-calcite veins associated with disseminated pyrite as well as molybdenite stringers. Hole O3MA-20-012 intersected 1.2 g/t Au over 9.7 m and hole O3MA-20-015 returned values of 2.0 g/t Au and 2.0 g/t Ag over 5.4 m. The new mineralized zone remains open at depth, up-dip, and 650 m to the west. Follow-up holes will be drilled next summer on the up-dip and westward extensions.

Hole O3MA-20-013 crosscut a series of albitized dykes that resulted in strong biotization of the surrounding ultramafic rocks. Gold is found associated with the biotized ultramafic rocks with few quartz-calcite veinlets as well as within the dykes. The first intercept returned 13.5 g/t Au over 1.3 m where mineralization is restricted to the biotite zone, while the second intercept of 2.8 g/t Au over 4.3 m is related to the dyke and its altered walls. 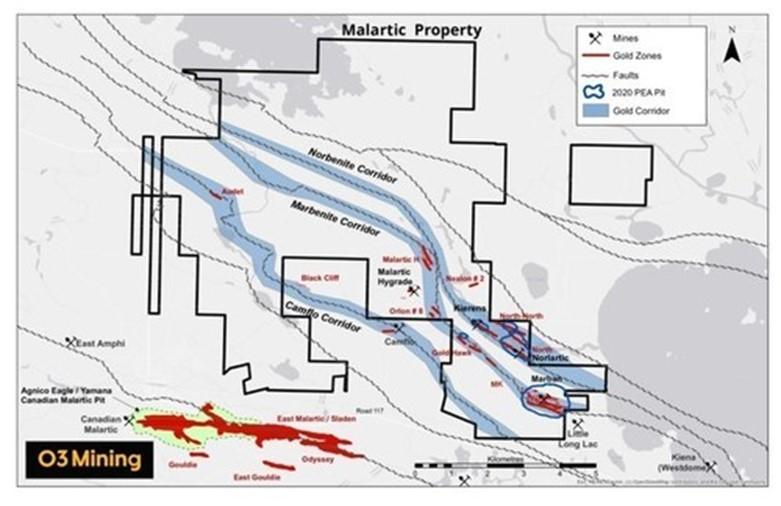 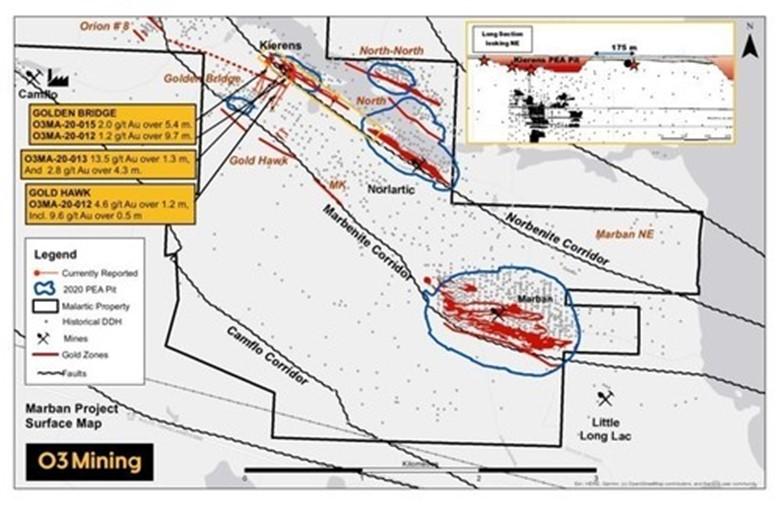 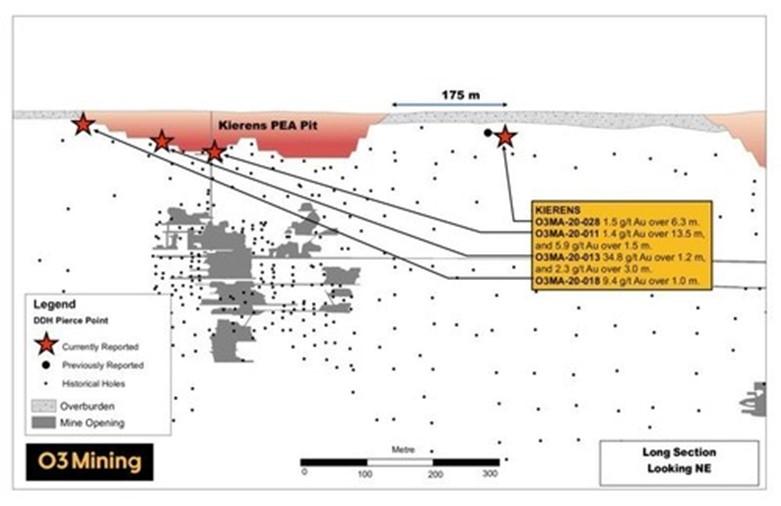 O3 Mining is well-capitalized and owns a 100% interest in all its properties (133,557 hectares) in Québec. O3 Mining trades on the TSX Venture Exchange and OTC Markets. The company is focused on delivering superior returns to its shareholders and long-term benefits to its stakeholders. 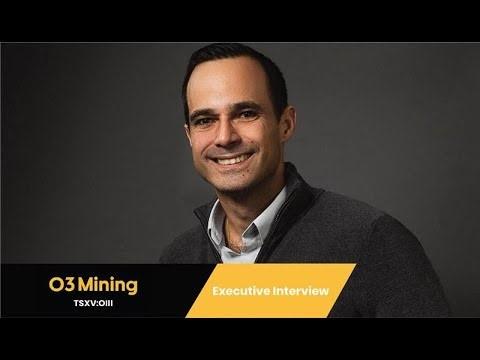