O3 Mining Inc. (TSX-V: OIII) (OTCQX: OIIIF)  is pleased to announce the completion of the Pre-Feasibility Study, prepared in accordance with the National Instrument 43-101 – Standards of Disclosure for Mineral Projects, for its 100% owned Marban Engineering gold project, in the world-class mining region of Val-d’Or in Québec, Canada. All figures are expressed in Canadian dollars unless otherwise stated.

Jose Vizquerra, President and CEO, states: “We are pleased with the results of our PFS for the Marban Engineering Project which demonstrates the potential to be the next gold producer in the Abitibi region in Val-d’Or, Quebec, the next step in delivering on our promise to be in production by 2026. With robust economics, Marban has shown itself to be a profitable standalone project. Using a long-term gold price of US$1,700 oz gold, the project has a post-tax unlevered IRR of 23.2% well above the 15% IRR investment threshold used by many larger gold miners, and a post-tax NPV of C$463M as well as an NPV/CAPEX ratio of 1.1x, with an AISC of US$882 per ounce. This is a key achievement in an inflationary environment in which mining companies are seeing higher cost increases. The project has an improved production profile of over 160,000 oz Au annually, for an approximately 10-year life of mine compared with our 2020 PEA. We believe the opportunity to grow Marban remains high, with many mineralized zones not included in the Mineral Resource Estimate, which could add to the LOM, and further improve Marban’s economics. Current drilling at the Hygrade Fold area (North-west of Kierens pit) has the potential to add to the current resource within the greater Marban Engineering Project. We have the privilege to be developing Marban in a jurisdiction that has a green-powered grid with 99.6% renewable power and that has a strong carbon policy. Compared to other jurisdictions developing gold mines, Quebec’s carbon intensity is one of the lowest in the world. Work on the feasibility-level studies has begun which we expect to complete in 2023. O3 Mining continues to deliver on all milestones and stated goals as we continue our progress towards production, and creating fundamental value with the Marban project for our shareholders and other stakeholders.”

The Marban project is located between the cities of Malartic and Val d’Or in the Abitibi gold district of Québec, Canada. The project area contains six past-producing mines, which collectively produced 585,000 ounces of gold between 1959 and 1992. The land package owned by O3 Mining, in the heart of these mining camps, covers 125 square kilometres and is located 12 kilometres from the Canadian Malartic Mine and along the same shear structure as Wesdome Gold Mine’s Kiena deposit. 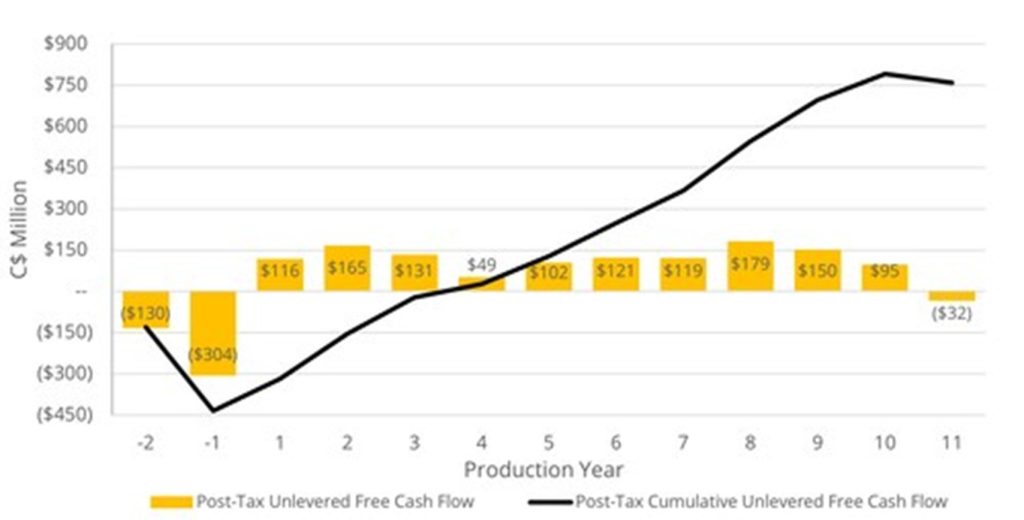 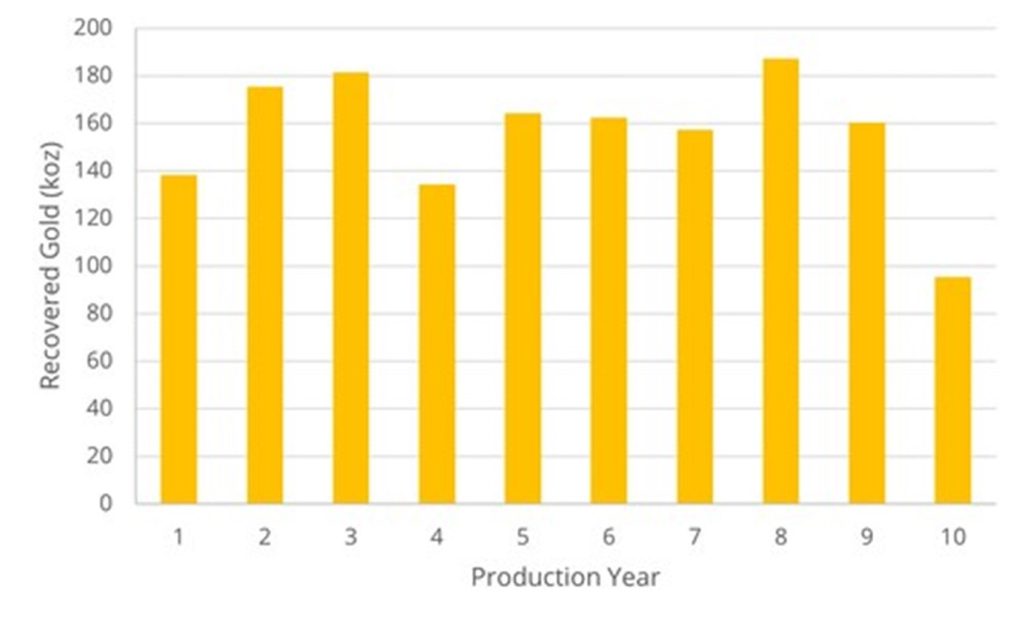 A sensitivity analysis was conducted on the base case after-tax NPV and IRR of the Marban project, using the following variables: gold price, total CAPEX (initial + sustaining), total operating cost, and US$:C$ exchange rate. The tables below provide a summary.

The Proven and Probable Ore Reserves for the Marban project are estimated at 56.4 Mt at an average grade of 0.91 g/t Au for 1,807 Koz of contained gold at 0.3 g/t Au cut-off grade as summarized in Table 3. The Mineral Reserve is included within the Mineral Resource.

The Marban Engineering project will be mined with a conventional drill, blast, and haul setup. The project is split into three mining pit groups: Marban, Norlartic, and Kierens which are further split into nine sub pits and phases.

Special considerations are made in the mine plan to mine out the smaller northern pits (Kierens and Norlartic) early to allow in-pit deposition of the processing plant tailings and reduce the project footprint.

Metallurgical testing was completed at Base Metallurgical Laboratories (independent of O3 Mining) in Q1 2022. The gravity leach test results were analyzed to provide recovery models for use with the mine production schedule.

In addition to the predicted extraction, plant losses include:

The process flowsheet was designed based on historical and recent test work carried out by Base Metallurgical Laboratories in 2022. The 2022 test work program investigated comminution (Bond Ball Mill Work Index tests), gravity separation, leach optimization, leach variability test work, cyanide detoxification, solid-liquid separation, and pressure filtration. The results indicate that the samples were of medium hardness, with Bond Ball Mill Work Index results ranging from 9.6 to 14.6 kWh/t, and the 75th percentile of the samples tested was 14.1 kWh/t. Historical comminution data was utilized for the balance of crushing and grinding circuits design.

Based on a mine-to-mill analysis, the processing plant capacity has been increased to 6.0 million tonnes per year or 17,900 tonnes per day at 92% availability.

The process design for the project consists of:

The tailings management design was completed by Ausenco, and it is based on conventional thickened tailings storage. There are two storage facilities for the project:

The total initial (pre-production) capital cost for the Marban project is estimated to be C$435 million including allowances for contingency of C$44 million. Sustaining costs are estimated to be C$283 million over the life of mine.

Capital and sustaining costs were compiled by Ausenco from the following sources:

Operating costs have been compiled based on the following sources and assumptions:

Social Acceptability and License to Operate

In addition to applicable regulations, the Marban project will require social acceptability. Early information and consultation meetings have been held with local communities, First Nations Communities, local, provincial, and federal governmental authorities to initiate collaborative work to obtain social acceptability of the project.

The project will be subject to the regulations under the Canadian Impact Assessment Act and Québec’s Environmental Quality Act. The environmental baseline studies are well advanced which will permit the initiation of the environmental impact studies.

O3 Mining will continue to regularly meet stakeholders as project milestones are reached and will be presenting and discussing the PFS results with the host communities.

Following the release of this PFS, O3 Mining will move the project forward towards the necessary bridging work for the commencement of the feasibility-level studies. The Corporation is well-funded to continue the drilling program on Marban Engineering including the expansion of all lateral extensions of the near-surface mineralization. Additionally, the O3 Mining will be looking to unlock the potential in the Hygrade Fold area (North-West of Kierens pit) as well as the downdip extension of the Marban deposit. Furthermore, an initial project description will be filed with the environmental agencies to initiate the impact process.

Additional trade-off studies will be completed during the bridging phase to the Feasibility Study assessing new technologies including autonomous haulage and trolley assist mine fleet that may impact project economics and environmental footprint.

The scientific and technical information contained in this news release has been reviewed and approved by Mr. Louis Gariépy, P.Geo (OIQ #107538), Vice President Exploration of O3 Mining, who is a “qualified person” within the meaning of NI 43-101.

Half-core samples are shipped to Agat laboratory in Val-d’Or, Québec and Mississauga, Ontario for assaying. The core is crushed to 75% passing -2 mm (10 mesh), a 250 g split of this material is pulverized to 85% passing 75 microns (200 mesh) and 50 g is analyzed by Fire Assay (FA) with an Atomic Absorption Spectrometry (AAS) finish. Samples assaying >10.0 g/t Au are re-analyzed with a gravimetric finish using a 50 g charge. Commercial certified standard material and blanks are systematically inserted by O3 Mining’s geologists into the sample chain after every 18 core samples as part of the Quality Assurance, Quality Control (“QA/QC”) program. Third-party assays are submitted to other designated laboratories for 5% of all samples.

Historic assays have been validated through extensive validation procedures and analyses. Re-assaying of historic drilling is ongoing with re-assayed values included in the resource estimate. Data prior to 1984 that has not been re-assayed has not been included in the resource estimate due to lack of QA/QC. The drill program design, QA/QC and interpretation of results are performed by qualified persons employing a QA/QC program consistent with NI 43-101 and industry best practices.

The Corporation has included certain non-IFRS financial measures in this news release, such as initial capital cost, sustaining capital cost, total capital cost, AISC, and capital intensity, which are not measures recognized under IFRS and do not have a standardized meaning prescribed by IFRS. As a result, these measures may not be comparable to similar measures reported by other corporations. Each of these measures used are intended to provide additional information to the user and should not be considered in isolation or as a substitute for measures prepared in accordance with IFRS.

Non-IFRS financial measures used in this news release and common to the gold mining industry are defined below.

AISC and AISC per Ounce

AISC (all-in sustaining cost) is reflective of all of the expenditures that are required to produce an ounce of gold from operations. AISC reported in the PFS includes total cash costs, sustaining capital, closure costs and salvage, but excludes corporate general and administrative costs. AISC per ounce is calculated as AISC divided by payable gold ounces.

O3 Mining Inc., an Osisko Group company, is a gold explorer and mine developer on the road to produce from its highly prospective gold camps in Québec, Canada. O3 Mining benefits from the support, previous mine-building success, and expertise of the Osisko team as it grows towards being a gold producer with several multi-million-ounce deposits in Québec.

O3 Mining is well-capitalized and owns a 100% interest in all its properties (66,000 hectares) in Québec. O3 Mining trades on the TSX Venture Exchange and OTC Markets. The Corporation is focused on delivering superior returns to its shareholders and long-term benefits to its stakeholders.